Samuel L. Jackson failed to salvage Snakes on a Plane, an intentionally bad movie with an intriguingly stupid title. However, he provides laughs galore in Lakeview Terrace, an unintentionally bad movie with an unenticingly generic title. The Lakeview Terrace plot, such as it is, unfolds during the trailer: Jackson's Angry Black Man violently disapproves of the interracial couple next door, and they're powerless to stop him because he's a cop. The rest of the running time consists almost entirely of Jackson reaction shots. His cartoonish careening between withering scowls and wide-eyed bewilderment should have been soundtracked by a slide whistle. 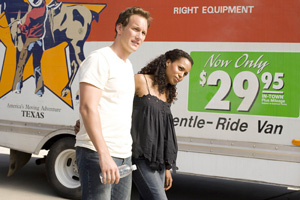 This scene foreshadows how Chris and Lisa end up on the wrong end of a horse's ass.Samuel L. Jackson's policeman Abel seems like a decent enough fellow during the film's opening scenes. He's a widowed, gray-goateed crank who raises his kids strictly: No iPod at the breakfast table, no saying "nothing" when you mean "anything," no wearing Kobe Bryant's jersey because -- well, you might assume a cop wouldn't want his son emulating an accused rapist, but it turns out Abel's probably pissed because the alleged victim was white. Anyway, Abel spots an attractive African-American woman moving in next door (sliding whistle up), but he realizes in horror that the sloppy white dude who's been carrying her boxes is her husband (sliding whistle down). He looks furious and incredulous, as if they were fucking right in front of him. When they do just that in their pool later that night, Abel's ballooning eyes become dangerously overinflated.

Exhibitionist neighbors Chris (Patrick Wilson) and Lisa (Kerry Washington) act like their moving van should've stopped in front of some unwatchable sitcom. They say things like "honey, I'm home....owner," and they play grab-ass while making lame "naughty" jokes about borrowing their cop neighbor's handcuffs. Abel's methods might be extreme, and his motives might be suspect, but seriously, would you want these fucking people living next door? 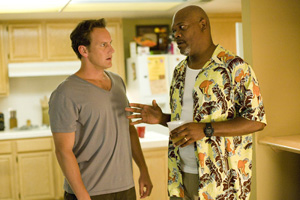 'Dorks. They look like a couple of dorks.'Chris' unsubtle character might as well have been christened Liberal White Faggot. One of his first lines is "you'd look good in a Prius." He works for a grocery store chain with an "environmental agenda," and he explains "planting trees is good. Trees make oxygen." He attended Berkley on a lacrosse scholarship, and later he brandishes a lacrosse stick in a pathetically unintimidating display of aggression. Honestly, do you hate him yet? Liberals should be writing the makers of this movie to protest this unflattering stereotypical depiction, instead of wasting their time on trivial matters, such as writing to people like me to complain about the inappropriate use of "faggot."

Chris drives around blasting exactly the kind of rap music white people treasure: Black Sheep, Public Enemy, Wu-Tang Clan. However, the film presses the issue when it pretends Ol' Dirty Bastard would make the play list at a police bachelor party. At that point, it goes beyond "this is what kind of rap a guy like Chris would enjoy" and becomes more "this music is cool, and you're cool for knowing about it, and we're cool for putting it here."

Lisa's job, judging by an over-the-shoulder look at her computer screen during the only scene where she's actually doing any work, appears to be designing Bratz characters. She grew up in a sheltered environment, as evidenced by the fact that she retrieves her mail in a slinky bathrobe and plans to bust up a bachelor party while wearing a skimpy nightgown. During the film's mandatory female dancing/bonding scene, Lisa introduces Abel's daughter, who's not supposed to be at 'that house' without permission, to Destiny's Child. Not only is it unlikely that the teenager Abel calls an iPod "zombie," hasn't heard the group, but also this musical selection blows a real opportunity to propel steam from Jackson's tea-kettle ears. Imagine if Lisa had been exposing the daughter to something really, really white, like Jack's Mannequin or something, right before Abel burst in with his "what the hell is going on here" speech. Then again, given that he reacts by taking off his pants and slapping the shit out of his daughter, Abel probably didn't need any more provocation. 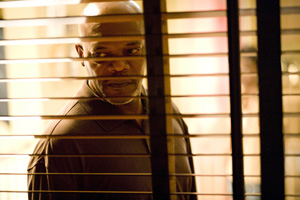 Abel spends most of the movie peeping through his window, or glowering ominously through his neighbors' fence.In Abel's first salvo against Chris and Lisa, he sends flood lights glaring into their curtainless windows. Chris responds with a high-powered spotlight of his own. This is the gayest light war ever, and Jackson would know definitively, having witnessed some shitty saber action during his participation in the atrocious latter-day Star Wars trilogy. At one point, Chris snarls "stay out of my life," and Abel's lights suddenly switch on, the fluorescence buzzing as both parties ponder the significance of ultimatum-sensing illumination. Abel's eyes go from full moons to narrowed crescents during these confrontations, at a frequency that probably affects the California tide.

The conflict between Abel and The Bland Mixed-Race Couple escalates with several acts of mild vandalism and plenty of suspiciously "clever" verbal abuse. Abel occasionally halts his one-liner barrage (Chris must be "black Irish," Lisa is his "little chocolate drop") to launch screenwriter-mouthpiece tangents about how white people sure love irony and the word "whatever." Eventually, the storyline spirals into complete bad-thriller absurdity, culminating in the most ludicrously staged scene ever to use a cell phone as its dramatic fulcrum. The multi-racial audience at the screening I attended broke the "tension" during this climactic Big Reveal by bursting into hysterical laughter.

Chris and Lisa both use "three degrees south of awful" to describe their condition after separate traumatic final-act ordeals. This clunky description fails miserably as a catch phrase, but it accurately assesses the film's quality.