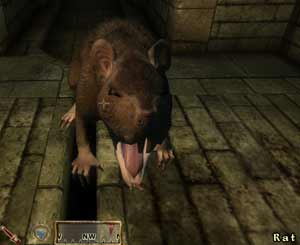 Rats off to ya.I was talking to old man Kyanka the other day, something creditors haven't been able to do for three years, and he told me about asshole physics. Asshole physics is the practice of going into a game and being an asshole to every character you meet, knocking shit over and generally being a pain in the ass using these new-fangled physics engines.

"Rich!" I said, "I've been an asshole in real life for years now! I would love to implement my asshole abilities in a video game! Yes, that's exactly what I want to do with my weekend!"

He told me about The Elder Scrolls: Oblivion, second only to World of WarCraft as the RPG nerds would rather live in instead of real life. Recently released on a torrent site near you, Oblivion tells the story of a dying king who enlists a prisoner to find the gates of Oblivion and close them shut forever. I don't know about any of that fantasy nonsense but this game must have been designed by some real assholes considering all of the items the developers have meticulously placed for you to knock over.

But that's not all. Much has been made of Oblivion's "radiant A.I." system. This allows developers to create life-like NPCs that pace back and forth in alleys, have disjointed awkward conversations with other NPCs, and stare at walls for six hours at a time, just like in real life! Every NPC has 24/7 cycles that usually result in hours of fun trying to find a NPC so you can give them the ten wolf hides they asked you to fetch for them just like in EVERY DAMN PC ROLE-PLAYING-GAME EVER MADE. These cycles can create dynamic quests such as having to find a certain NPC who only goes out on the weekend only that I can't figure out which made up fantasy word used to describe the days of the week means "weekend". When coupled with asshole physics radiant A.I. creates asshole A.I.

In addition to baffling NPC cycles Oblivion takes killing rats and fetch quests to an unprecedented level never before seen in a video game. Oblivion features rats in high-resolution HDR anisotropic pixel lighting and sewers with bump mapping z-buffer effects. Never before has killing rats in a sewer level looked so good. The unoriginality literally jumps out at you!

Who could resist? I decided to fire up Oblivion and test drive the asshole physics with the all-new asshole A.I. Read on for my complete benchmark report. 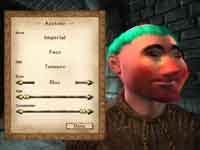 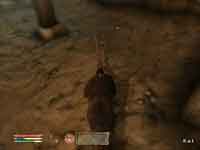 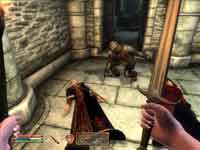 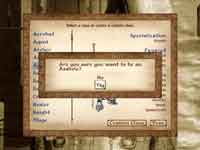 My adventure in Cyrodiil began in prison. Before I could respond to the inmate flirting with me in the cell across the hall some guards appeared with Patrick Stewart. He told me that he foresaw a video game developer paying him boatloads of money for like two hours of voice work so their queer fantasy game can have some semblance of credibility. He explained to me that I was now free, free to stumble my way through a tutorial featuring rats in sewers. At the end a guard attempted to guess my class. He said he thought I was a bard. He must have thought he was talking to a homo because there is no way any dude would play a bard. I was a whole class of my own. I was... an asshole.

The king went on to tell me some bullshit about foreseeing the destruction of Cyrodiil and gave me an amulet. He said that I was the only hope to save Cyrodiil but then he was killed by the Borg. Good riddance to him. I got shit to knock over. I chucked that damn amulet into a river somewhere and went to work slightly annoying fictional characters in a video game. I left the sewers hoping to never have to see another sewer in a video game, but I knew the sewer level and I would soon meet again. 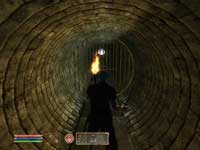 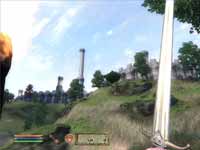 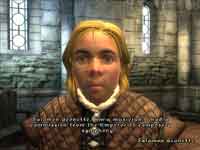 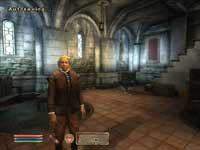 Ah, the Imperial City. You'll never find a more wretched hive of relatively boring people. My first goal after getting out of prison was to get laid. I met a handsome man by the name of Salomon Geonette. There he was, a man and his dog, living together in the hustle and bustle of Imperial City. He was a dreamy musician. Unfortunately he was also married to a NPC (also known as women in real life). She talked to him just like he was another retarded NPC. "Any news from the other provinces?", she would ask. He's your husband lady. You're supposed to go, "Hey give me that meaty cock and shove it down my throat while I stroke the dog." Family values in the Imperial City were virtually non-existent.

I was about to change all that. I entered into a conversation with Salomon and tried to persuade him to run away and marry me under the fiery Oblivion gates. There we would exchange man fluids while appreciating the beautiful blurry terrain over yonder hills. However, persuading a man into having gay sex with you is tricky enough in real life. In Oblivion it's even harder! 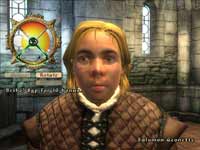 Back in Morrowind all you had to do to persuade someone was to click "persuade". Based on a number that represented your ability to socialize (which is probably much higher than your real life number, if we had numbers to describe our social skills, which we don't, but the joke is you're probably an anti-social Internet recluse, get it?) you were either successful or unsuccessful.

Somehow this causes them to like you more. They'll even comment on your performance after you are done. This makes the game a lot more realistic. In real life when I met my girlfriend I continually coerced and boasted her into letting me see her naked while keeping my admiration and humor as subtle as possible. I'm glad Bethesda finally made persuasion in an RPG more immersive.

After I was done with the pie chart game Salomon didn't want to have sex with me, but his number was higher than it was before, which made me realize something more was there. Maybe he didn't want to make love because his dog was watching us. Who feels comfortable having sex in front of their pets? I don't mind but maybe this guy had a hang-up about it. 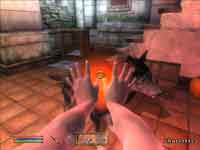 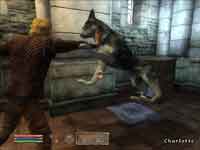 I decided to cast a fatigue spell on the dog to make him go to sleep and leave us two lovebirds alone. Lo and behold the dog didn't become tired at all! He actually became enraged and attacked me. Luckily for my safety I made Salomon like me so much he killed his own dog. It's good that they practice responsible pet ownership in the Imperial City. 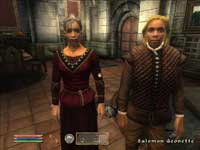 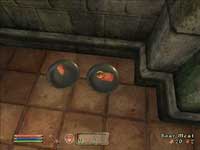 Unfortunately his wife came home and I realized it was hopeless. Despite what he felt inside Salomon knew that he had to continue living a lie in this oppressive Imperial City. Alas, our manlove would never be. Still, I got him to kill his dog for me. It was then that I knew he felt something for me too but the only way he could express it was by killing his dog. I made my leave and wondered what could have been. I swiped the delicious dog food while they weren't looking and continued on my quest to annoy people and make them kill their own pets. 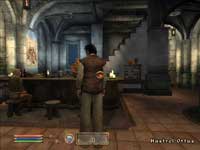 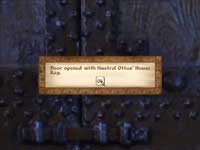 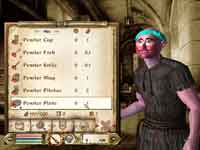 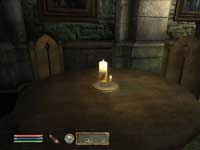 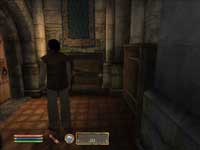 He seemed like a nice fellow so I decided to pickpocket his key and steal everything in the house. I stole the food, the silverware, books, anything that wasn't bolted down. I stole so swiftly that the candle hovered in the air over the table. Then I waited for the radiant A.I. to kick and the chaos to ensue. Much to my surprise the Ottus household didn't really mind having all of their worldly possessions stolen. They simply went on with their day of staring at walls and standing in the same place for hours. Maybe they had just gotten used to the horrors of city life, like how you get used to a hot tub or how people who live in Los Angeles get used to being murdered every day. 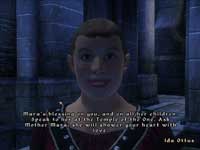 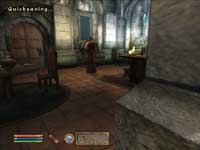 It was then that I noticed they had a bald butch daughter named Ida Ottus. Oh great, a religious freak. Her day consisted of going to the inn, staring at the wall for, I shit you not, 5 in-game hours, and then coming home. I have to be honest, these NPC 24/7 cycles absolutely blew me away. It was simply amazing... when they did it in MAJORA'S MASK FOR THE NINTENDO 64.

I was tired of these NPCs. Promises of asshole radiant super duper A.I. were lies, horrible horrible lies. I decided to do what anyone would do in my situation. That's right, continue to play the game while continuing to bitch about every aspect of it. 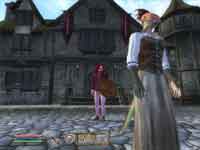 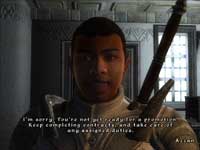 I traveled to Chorral and joined their fighter's guild. Unfortunately they had no rat quests for me so they sent me to Anvil. In Anvil I met Azzan who asked me to take care of some rats. I was to kill ten rats and bring the rat meat to the rat master to get a rat potion that would make me more adept at killing rats to get rat meat to bring back to the rat master so he could give me a rat sword that shoots rats at other rats. The only thing that can hurt another rat is, of course, another rat. I asked him for advancement and to my surprise he refused. I guess the guy simply didn't know who he was dealing with. I, the great rat slayer of Fallout, wasn't going to stand for such disrespect at all. I went up to his office and decided to give him a little surprise. 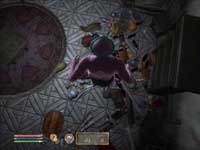 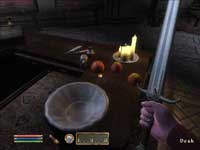 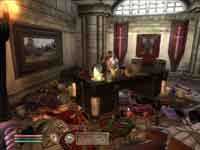 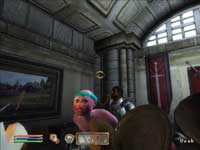 I took everything in the fighter's guild and threw it on the floor. Boy will his face be red when he comes in! It turned out my antics didn't phase him the slightest. He didn't even flinch when I knocked his apples out of their bowl. He sat down and began yawning, something that would last for 4 in-game hours. I decided to take everything on the floor and throw it on his desk. Even still he kept his cool. It was then that I figured out what he really wanted. I obliged, only if I got my advancement of course. 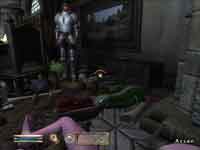 Oh yeah, something advanced alright. Unfortunately Azzan wasn't going for any of that homo shit and decided to kill me. My days of wreaking havoc in Cyrodiil were over.

In the end I was very disappointed with my asshole A.I. experience. The asshole physics were all there, sure, but I was hoping for the much hyped "radiant A.I." to take it to a whole new level. Check out this video. Apparently radiant A.I. is all about giving NPCs goals and they figure out how to accomplish those goals. I guess they accidentally set everyone's goal to "watch paint dry".

Having said that, you can't beat The Elder Scrolls: Oblivion for its top notch asshole physics experience. But at the end of the day Oblivion is only but a small step in the advancement of being a virtual asshole. Here's how the ratings break down: