THE NEWS MAGAZINE OF THE COMPUTER SCREEN, VOL. 5 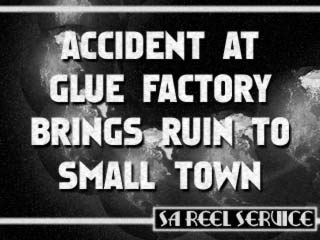 A disaster of biblical proportions struck the tiny hamlet of Brick, New Jersey, wiping out all life and preserving the town under a blanket of raging adhesive! In the afternoon hours, Ablegrip Glue Company's main production plant suffered a catastrophic meltdown, causing pipes to rupture and spew hot glue, which poured out of windows and oozed through city streets encasing men, women, and children in sticky death!

Hands struggled to rise above the tidal waves, but they could not reach far enough! Cars were left frozen in place, unable to move, entombing their passengers like ghastly sarcophagi of old! Some residents raced to rise above the slow moving disaster by climbing to rooftops, but the noxious fumes of hot glue knocked them out cold.

"It was horrible!" said one lucky survivor, who was piloting a homemade gyrocopter at the time of the disaster. "Never before has such a disaster befallen such an important city!"

The horror! This reporter watched helplessly as a wayward wave of glue some incredible twenty feet high crashed down on an unsuspecting schoolyard! The poor children didn't have time to think as the horrible wall of goo advanced upon them, perfectly preserving their terrified expressions for all time!

Not since Vesuvius engulfed Pompeii has there been a disaster of this magnitude! The entire city sits encased in a thick coating of hardened glue.

"The people of Brick had pottery, sculpture, and were experimenting with various pigments to make paint," commented storied anthropologist Dr. Professor Dirk Raptor. "Their contributions to civilization may never again see the light of day."

Ablegrip president Chance Strongarm apologized and vowed to help cleanup and rebuild. "I pledge all the glue in the world to help build a new Brick on top of a hill!"

Still, this horrible disaster was not unexpected! The Army Corps of Engineers warned of the dangers posed by the Ablegrip Glue factory two years to this fateful day! "We did extensive simulations with popsicle stick models of the town," said Chief Engineer Rory Butterkiss. "We knew it was only a matter of time!"

Meanwhile, investors trying to unload Ablegrip stocks complained of foul play. Said one outraged investor, "There's glue on these stocks! I can't even sell them because they are stuck to my hands!"

Talk about a sticky situation! 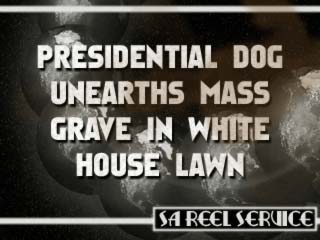 Buster, famed First Pet, made a gruesome discovery early Tuesday morning while looking for his favorite bone buried in the White House lawn.

Bodies! Hundreds of bodies in various states of decay were unearthed by the pugnacious pooch, a curious little fellow with a topnotch snout.

Still, some are urging investigation! White House critic Swanson J. Broth was quick to offer a differing opinion! "Buster, who is probably the best doggy in the world, made this discovery on behalf of justice. We want a full investigation. For all we know, these 175 bodies might possibly belong to the 175 journalists, dignitaries, and honored guests that disappeared during their visits to the White House!"

White House Secretary of Groundskeeping Mortimer von Grimsaw disputed Broth's claims. "These are likely the bodies of Native Americans from centuries past," said the pale, fidgety, overly-nervous, cross-eyed cabinet member. "No further investigation is needed at all!"

Either way, looks like delightful little Buster has plenty of bones to sink his teeth into!