When most people think of Superman and Batman interacting in comics, they think about large scale adventure and fun. Sure, Batman is a walking bottle of pressurized trauma and Superman is a boy scout. But Superman is also optimistic and sincerely concerned about others, and Batman is a total weirdo that goes to ridiculous lengths to outsmart others. Combine the two and you have access to every corner of a colorful universe, from mentally troubled street criminals in with burlap sacks on their heads to giant space brains.

Even when they clash the tension is offset by stuff like Superman's understandable overconfidence or Batman brawling in a mech suit. 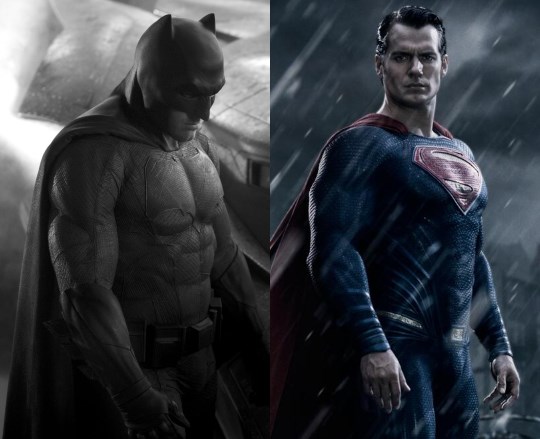 Now, it's not fair to make assumptions based on a few promotional images. I know, I know. There's just something that I have to say - it looks like this movie is going to be an absolute joy that will leave everyone smiling.

A few people who saw rough cuts of the film have contacted me, and the descriptions of their favorite parts back up my impressions.

The most striking scene I've heard about is a stirring speech given by Superman. "What's the point? Why try to save anyone? All of this is just... (gestures vaguely and shrug) dumb garbage. I don't like anything. Being powerful is really hard." Multiple sources tell me that comic fans leapt to their feet and cheered enthusiastically at this scene, and when they sat back down they felt so energized that they fidgeted in their seats.

One sequence was described to me as a time-lapse of Batman's bedroom. He naps constantly, sits on the edge of the bed with his head in his hands, and when he does get up his movements are aimless and lethargic. Batman doesn't even take off his costume because the act requires more effort than he's willing to give. Five straight days are depicted and set to the Gary Jules cover of Mad World.

Another fist-pumping scene has Superman standing in the rain, scowling as he studies a chart with every color in the universe, from grey to blue grey to black.

Then there's the climactic Batman and Superman fight. In their run down apartment, the two argue about money, which neither have in this tough economy. Eventually the spat gets personal when Batman brings up Superman's heroin use. Superman mentally shuts down, a teacup tumbling from his hands in slow motion then shattering as it strikes the ground.

Every source has commented on Lex Luthor, who confounds Superman at every turn in this movie. At one point Superman flies away crying because he simply can't understand half the words Luthor is saying. We then see a flashback of young Clark Kent playing with a simple block puzzle, unable to figure out which shapes fit into which holes. He forces them through with his superpower. Pa and Ma Kent watch from another room, arguing in whispers about the boy's learning disorder. Ma Kent flinches when Pa steps toward her and we see a series of bruises on her arms. Pa Kent insists that Clark's stupidity is somehow a result of his wife's lesbian affair with a traveling saleswoman, which is depicted in a surprisingly graphic slow motion flashback-within-a-flashback.

This is the big one, folks. My sources are positive that the thrilling conclusion to Batman V Superman will leave the audience overcome by feelings of fun and good times. Superman and Batman are driving back from their visit to the psychiatrist in bitter silence. A strange look forms on Batman's face, or at least the parts of it that we can see. He opens his mouth with a slight smile, possibly to begin the long road to repairing their friendship. In an inspiring flourish of creative film making the camera (outside Superman's window, facing the opposite window) catches the sudden appearance of a truck as it blindsides their car.