Phrases Most Likely Used to Introduce a Segment on "Beyond 2000" 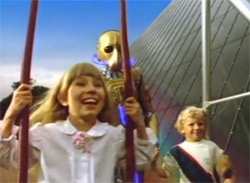 "James Bond, eat your heart out. Like something straight from Q's laboratory, this prototype car from Holden is one you'll want to get all wet. That's right, it's also a boat of sorts."

"Vegetables. You have to throw them out when they get moldy. Until now. Meet BIXBI, a robot that runs on your old veg and can help with counting around the house."

"Computers are the cool thing these days. Soon you will be able to stay warm with your computing in the world's very first computer shirt."

"Tony gets behind the wheel of a car that would make James Bond jealous. This Jaguar prototype is a sleek sporting car and a passable motor boat."

"Are you going camping or to a party and your friend doesn't want to miss her favorite television programme? Video expert Wyand Bulfer has a television you can wear on your chest." 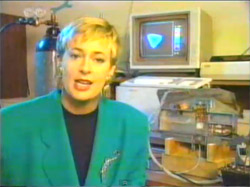 "Plus, meet the man who thinks everyone will be plastic in ten years. When you find out why, you might just agree with him."

"Football, or soccer to you Americans, is the most popular sport around the world, but one scientist wants to spread its popularity even farther by broadcasting the Association rules at Jupiter."

"Mothers are surfing onto the wide world web. This doctor in Toronto believes you will soon be able to put your mom into a computer. Find out how it works."

"It looks like a box on a ladder, but meteorologists hope this inexpensive detector could provide up to an hour's warning before a rainbow appears."

"Kevan Hibbes is the discoverer of a new sort of graphics for computers that may just change the way you look at math." 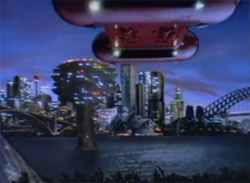 "Have you seen this head around town? You may soon. It looks like an ordinary mannequin top, but the DJ7 contains a sophisticated computer chip that its inventor claims will prevent dogs, birds and even some kangaroos from opening supermarket doors."

"Is Toyota out to lunch? Their new car costs 90,000 dollars and you'll never believe what it runs on. Catsup."

"What if you could take a pill to make your fingers smaller? It might be on the horizon according to one Japanese researcher."

"You're not imagining things, that is a television and it is playing a hit from AC/DC. The new Magnavox television plays TV and your favorite rock tapes."