Why Didn’t Either Candidate Discuss The Big Trouble Going On In Little China? 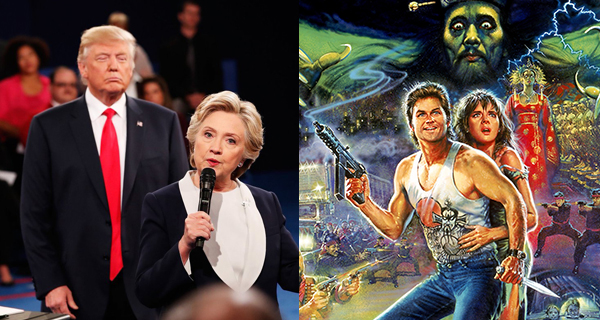 Last night's debate proved one thing: this election is not about the issues. Both candidates proved equally vicious, with Trump threatening to "jail" Hillary Clinton, and Hillary stating that grabbing random women by their vaginas was "wrong."

Yes, it certainly was a 50/50 contest when it came to engaging in distraction over discourse. But amongst the most important issues ignored by the candidates: the ongoing troubles in SF's famed "Little China."

If our two equally out-of-touch candidates would step out of the gold adorned Trump Tower or the Harlem HQ of the Clinton Foundation every once in awhile, they would realize that the streets of Little China are a literal warzone. Gangs can't even bury their dead without brutal reprisals, followed by the arrival of three ancient wizards wearing gigantic straw hats who can be run over by trucks without a scratch.

Where's the question about that, Anderson Cooper?

Hard working tour bus drivers/secretly rich mystical library owners like Egg Shen can't complete their tours without driving into a crossfire between the evil Wing Kong and the equally evil Chang Sing. And while our "candidates" bicker and squabble over who may or may not have tweeted about a sex tape at 3am (Trump says he didn't, and I'm inclined to believe him), gigantic green energy clouds are ripping apart our valuable brothels.

Where's the question about that, Ken Bone?

Until the situation in Little China improves, Trump has called for a total halt to immigration from Big China. Clinton, in another brutal personal attack on her opponent, has called this "unconstitutional." But no matter who you support in this election -- a man who calls hispanic women "Miss Housekeeping," or a lady who's so crooked some call her "Crooked Hillary" -- help for Little China isn't arriving fast enough.

Some are calling this election the most divisive and disgusting in history, akin to being attacked by a "wild-eyed, eight-foot-tall maniac." Well, when one of these creatures grabs your neck, taps the back of your favorite head up against the barroom wall, looks you crooked in the eye and asks you if you've paid your dues, I'm often reminded of the advice from the host of my favorite CB radio show:

And I'm pretty sure in this analogy, the maniac is Hillary Clinton. #MAGA