This article is part of the The Reificant series.

Witness of the downfall. Failed champion of my Queen. Spilled out into places that are not my own. Becoming flesh that does not belong to me. Restored to the shell of my birth. I am no more able to stop the water than a stone might halt the tide. But I must try.

Slithering upon smooth, warm stones. Freed from the membrane of my resurrection. I rise into a new place, a new air to passes into my lungs. It is humid and stinking of decaying flesh. Light penetrates into this underground place by channels of color crystal.

I stand before a two-legged animal of soft meat. Its head is supported on muscular trunk, it possesses dark eyes and short snout marked with a band of pigment. Its mouth is fleshy and it flaps when it speaks to me in strings of barking sounds. I am much larger than this creature. It is wary, but does not flee. I cannot understand its words and it cannot understand what I quill upon my back.

The sound of its cries draw more like it into the chamber. They are all of similar composition. Taller and leaner than the Mummon, their bodies more defined by musculature. They wear simple animal pelts around their midsections and their faces are painted with different pigments. Some brandish crude weapons, wooden poles with tips of sharpened bone or flint. I do not fear their weapons. I advance, ignoring them as they prod my flanks with their weapons, testing me but not attacking.

They retreat in a ring around me. I follow them out of a tunnel, slowly, my claws finding purchase on the damp, heated stones. Gradually the air becomes cooler, the tunnel narrower. The creatures crouch and I am forced to crawl upon my belly. I squirm like a larvae. It is as tight for me as the comb of my soft time.

After a long struggle the tunnel widens and I am able to walk again. Still surrounded by the upright bipeds, I emerge into a wide-open cave. Bright sunlight and the cool darkness of the shade are determined by a rough ceiling of black rock. This cave overhang is large enough to contain an entire settlement of these creatures, complete with blocky houses constructed from mud bricks, wooden beams and straw. Many walls are marked with shapes that must be depictions of local animals. Ladders connect the various tiers of structures, rising to the highest plateau upon which I now stand. 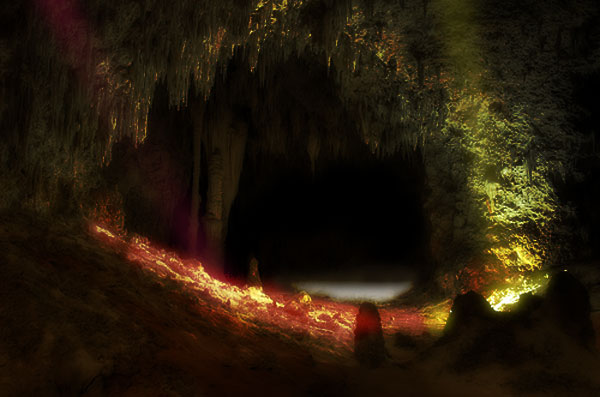 A disorganized rank of the bipeds awaits us. These are different. Some are small, juvenile possibly, others shriveled with age, still others are softer-bodied with fleshy torsos. The black hair that flows behind their heads reminds me of the banners hanging behind the desiccataphs of the ancient queens. These are not battle flags. This is the sign of mammals.

It is very quiet. I can hear my spiracles venting and the soft flap-flap of their hair in the wind that dips through the yawning cave. The discordant wail of a juvenile is shushed by an adult. I wait patiently, surrounded by the threat of their fragile spears. A shriveled biped shuffles forward. His hair is gray and not black. He is assisted by two younger individuals.

He opens a pouch of leather and empties pebbles upon the earthen floor. They are smooth and light in color as if plucked from a river. Crouching, he carefully arranges these stones into a shape of a circle surrounded by waving lines. When he has finished he points to the image and points beyond the open cavern space and to the daylight star in the sky.

"Una," he says and points to the shape in the sky.

"Una," he repeats and points to the pebble-shape on the ground.

I slowly move my foreleg, brushing a killing claw gently through the stones. I tap my foot for emphasis and, with great care, form the sound of their awkward word with my quills. The mammals gasp and murmur to one another as I repeat, "Una. Una. Una. Una."

I step forward and the bipeds part, fearfully, allowing me to walk slowly to the edge of the plateau. It overlooks their entire civilization of ladders and tiered houses hiding in the shadow of the cave.

"Una," I say once again and I gesture to the sky with my forelimb.

They shriek with alarm as I take flight, my wings beating the air and carrying me beyond the mouth of the cave and into the heat of the day. The daylight upon my shell warms my inner meat. Though the air is thin I am rejuvenated by this foray beneath blue sky.

A fictional serial serving as a prequel to the novel LIMINAL STATES.