Psychoanalysis In The Mushroom Kingdom

The key to making sense of the Mario franchise is understanding that the ultimate consummation of Mario's lust for Princess Peach is for him to blush while standing sort of close to her.

Mario is not a simpleton as some have suggested. He considers himself a romantic, hoping that kind acts alone will win over the girl of his dreams. Of course the only likely outcome is unrequited love, but Mario is completely unaware of this. For the most part he keeps his mouth shut so as not to screw things up with an awkward display of his true feelings. His childish and fantastical approach to interpersonal relationships can be directly attributed to life in a realm with anthropomorphic clouds and smiling hills. 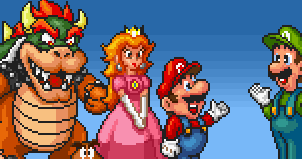 Many have wondered what motivation Mario could possibly have for competing in so many sports when he always seems so passive. It's almost as though he's simply happy to be there. In contrast, when Wario states that he's-a gonna win, it comes across as unhealthy and borderline evil.

Why is that? Why would someone take part in a competitive event if they didn't have at least some hope of winning? In Mario's case, he shows up simply because Peach is there. He believes that the more time she spends in his vicinity the more likely she is to fall for him. Love via osmosis.

So what about Princess Peach? She is, in fact, involved in an on-again off-again relationship with Bowser. Peach is attracted to the royal tortoise because he is several "types" in one: An older man (as evident from his litter of children), a bad boy, and a confident man in a position of power with financial stability.

The two of them have nothing in common. Peach tells herself that there is more to the relationship than the inexplicable and shallow attraction, yet if you put her on the spot and asked why she kept coming back to Bowser she would be hard pressed to come up with an answer.

To Peach, Mario is a friend. Harmless. Some part of her knows that he harbors romantic feelings, but she ignores this because his desperate kindness and clingy support fulfill emotional needs which are not being met by an aloof Bowser. Interestingly enough, her relationship with Bowser would end if she didn't have Mario around to make her feel as if things aren't going so bad when they are in fact terrible.

When we see Bowser kidnap Princess Peach, we are witnessing the event through the eyes of Mario. What's really happening? Peach is embarking on a consensual tryst. Mario sees this as a kidnapping because Princess Peach spends so much time complaining about Bowser. In reality she is simply fixated on the turtle, subconsciously coaxing sympathy from Mario as she tells him about a rocky relationship which she has no intention of breaking off.

While Bowser may not kidnap Princess Peach, he's still a dick. He sees the princess as little more than eye candy, giving her just enough attention to stay in her pantaloons. Bowser sees Mario's obvious crush on Peach and confronts his perceived rival at every opportunity rather than resolving the issue through rational discussion. In Bowser's mind, all threats must be dominated because he has deeply rooted control issues.

The Koopa kids are constant reminders of Bowser's failed relationships. The products of absent mothers and a father that prioritizes his kingdom and Peach before his children, they are a pack of troubled youths with poor impulse control and no supervision. Their attempts to stop Mario are desperate efforts to get their father's attention and perhaps win his love.

Luigi is not only a concerned brother, but an all around good guy that has lived through some heavy shit. He is world weary and alone. In his spare time he braves haunted mansions although he hates himself for being too weak to confront his own personal ghosts. Rather than supporting his brother from a healthy distance and being his own person, Luigi shadows Mario and lives vicariously through his failures and victories. He does this because he sees Mario as the only good thing remaining in a rotten world.

Yoshi is a cretin and an abomination. He must be stopped at all costs.

So ends the original speech given by Bill Pullman (as president Whitmore) in the film Independence Day. In the interest of time a shorter ad-libbed variation was used in the final theatrical release, but Roland Emmerich considers this monologue to be the central scene in the "official" version of ID4.

Until that definitive edition of the Independence Day's Director Cut Blu-Ray is released, the only way for us to experience the movie in its intended form is to read the above in Bill Pullman's weary yet reassuring voice, getting louder and more passionate as we go along.