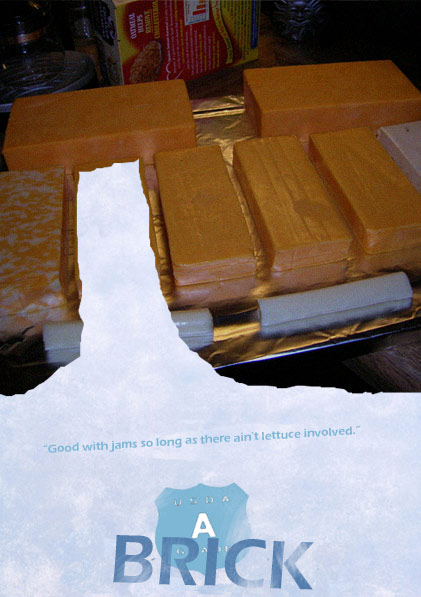 Rosa was button down next to the whey sluice, stiff as a freezer block. Her hand was dangling in the slurry and all I could do for a tick was watch and wonder how things got to here. 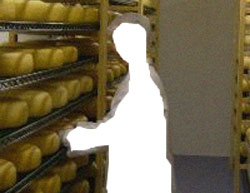 Rosa was snipped out of life like a sex scene in a moving picture on TBS. One day we're all writin' our big book, can't see the end. Then the book just up and slams itself closed without you askin', whether it's a bad pump or some bruno got it in him to squirt metal sos your seein' more daylight than a slice of Swiss. We all go fast, even when we don't. It was still a hell of a way to end up. She was a good twist, Rosa, but it don't do right by you or her to start things on the last page.

Flip it back a chapter. Probably best to start with yesterday.

The Hoof and me was headed to the lockers. He was bumpin' gums and I wasn't payin' no never mind. I open up my box and out pops a piece of tree with some curlicues on it what looked familiar. I picked it up.

The words was definitely Rosa's. She was an old moll of mine what took up with some hop-head from East Wisconsin, but I had no hurry to chatterbox with her since things flipped. Is being what is, the scribble tickled my winkerbeans. The Hoof was a simple sort sos I gave him the slip and left him to cipher the knots on his apron.

When I hit Cooper and Marlowe the place was emptier than a Sahara rain barrel, but no sooner had I set sole to cement than the phone started ringing.

"Hello," I says into the horn.

"Rosa?" I ask it for no reason, because I knew the answer.

"Second," she paused and I could hear her air comin' hard, "Tug. The brick. Poor Friscoe."

"Rosa-," that was the last time I talked to her.

A sweet hunk of iron came out of nowhere and burned past me leavin' rubber rails for a ghost train. I bum rushed the booth, but the ride was already showin' tail. No numbers or letters, but that midnight hair of Rosa's doin' a wave goodbye out the window.

Even then I knew things had dropped wrong, I just had to untangle the speaker cords before some harm came down on Rosa. The only man I knew what might have answers was the Hoof. I caught him workin' a wire shiv through some yellow on the C-line. The Hoof wore a special hunk of plastic what marked him out as trainable and meant half his lettuce went straight to the group home. He may be thicker than a submarine door, but he's like the screw in the center of a compass; always know which way things are pointing.

"I'm gonna give you some words," I said as I snapped on some rubber hands. "Tell me if any got hooks. Brick."

"The hop-head? That the one Rosa's been swappin' water with?"

The Hoof paused to swipe up a piece of melt that went sideways. He popped it in his kisser and showed crooked whites. 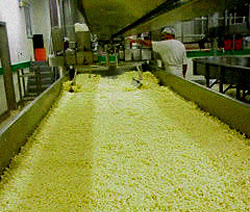 I wanted to work this like a hog at a pineapple festival. "What about 'tug', do you know that?"

"Second place is first loser," the Hoof was shrugging the plot and I didn't have time for his mind games.

I beat it for this flat bender uptown where I knew all the hop-heads hang when they're frostin' work. Sure enough, Friscoe was with his crew of no good palookas, takin' on tacos back by the rot bucket. They were lit like Roman candles, passin' tea and knockin' back horse water until their gills had gills. That put me up on them, sos I rolled right past Friscoe's crew and loomed in his puss.

"Hey hombre," he sneered, "lookin' for some trouble?"

"I'm looking for Rosa," I told the little wrong-way lunch, "and I'm gonna put the screws to you something terrible if you're not quick with the pages."

"I don't even know what that means," he laughed and had an eyeful of his smoked out goons.

"It means I'm holdin' five of the crowns and you've got a handful that don't add up to twenty," I grabbed him by his collar. "It means you and your boys been packin' in bent bread and horse water all day and can't even stand straight, but I could flick the goblin off a hummingbird's nose with both eyes shut. It means I'm hot like sterno and you're lightin' the wick, so spill pieces before I boil over and have to fix that split lip of yours."

I handed him a matched set of knuckles and then hoisted him back when he tried to drop. His eyes rolled boxcars on a seven game and I had to give him an extra back-ways shave just to get him seein' forward.

"What do you want to know?" He gasped.

"Rosa said second," I told him through locked pearls, "start there or your lid is gonna get turned out."

I gave his poison pump a tickle with my swinger and he looked fit to lose last month's breakfast.

"I don't know what that means! You're talking gibberish!"

Friscoe played it close no matter how much pain I was sellin'. I left him with a nice pair of googs and his jingle-brained greasers were too Costello to throw a hammer.

I was blowin' on my barkin' work bones when my second lead came at me at 40 miles an hour. It was the iron I saw pullin' Rosa on Marlowe at a high rate and this time I got the alphabet from its tail. T-U-G-4-6-9. It was movin' like a buttered rat in a curd pipe, but I knew some short cuts and moved sticks like a Chinese eating contest. Followed it back to a split level on the north side of town and waited in the blind for the tin candles to go out.

It took a sack of minutes, but eventually things got country quiet and I popped a glass box with my pocket slicer. By then it was pushin' moon outside, so I crept in all silent like. I found Tug sleepin' in the bedroom, along with a real surprise. Pictures of him and Rosa lookin' tight as lugs, even a couple where they were pressin' teeth curtains on the beach. Thoughts of a bad snatch ran through the dark parts of my folds and so I searched the closets and basement for signs of Rosa. I found some duct tape in the car hole, but I my search was brought up short when I heard a click. Tug was packin' heat and rather than waitin' for him to burn powder I legged it right out of there. 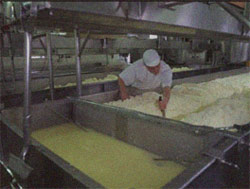 The stain of this one was spreadin' faster than a farmer's at a picnic in August. I wanted to keep the engine turnin' and drive on, but I was so low I could hardly see straight. I dropped feet fast until I hit my welcome mat and then I rode a pillow hard. I figured I would check in with the Hoof the next morning at work.

The sun birds came and with them my achin' bones. I was at the factory right on the buzzer for start of first and I knew I had to clean the whey sluice. That's when I caught up with Rosa the bad way.

Like I said, I was starin' at her for a good long while before I decided what direction to start rumbling. I grabbed a heater from the work rack and plowed at the longitude of Friscoe. If he was there I'd ventilate him good. Then Stilts, the boss of my boss, popped his mug up from behind the pasteurization prep table. He gave me this look like I was growin' extra arms and then he came my way.

"Where the fuck have you been, Carlos?"

"'Scuse me, Stilts, but I got some figures what need to be evened up," I tried to keep my schedule, but Stilts put a hand to my chest.

"Carlos, look, we're all upset, but this is way out of line. I don't know what you even think you're gonna-"

"I'm gonna go give Friscoe a case of lead poisoning for what he done to Rosa."

"You're going to shoot Friscoe with a hot wire cutter?"

"Then I'm gonna go back for Tug and peel his orange," I finally locked lookers with Stilts. "They murdered her for drugs and she was kidnapped."

"What are you, fucking retarded?" Stilts looked ready to pop his cork. "She asked you to work second shift for her, cover the Brick and Muenster delivery from upstate, and you never showed up."

"Carlos!" Stilts was yellin' far away somewhere. "She probably collapsed from exhaustion and drowned in that crap. Where were you?"

Froggy answers slipped out of my clampers and I just watch things goin' round and round.

"Play dumb," Stilts was sayin', "fine, but you're out of here. You can pick up your last check at front office. Get off my floor."

A man knows when he ain't welcomed, so I dropped the heater and split. On my way out the door I couldn't help but wonder if it was all worth it for some lousy brick. Puttin' a fine woman stiff for some tea or coverin' it up because you've got the fear of Chicago lightning comin' down on you from Tug. I shook my head. There was more to this and I wasn't about to let it fall under.