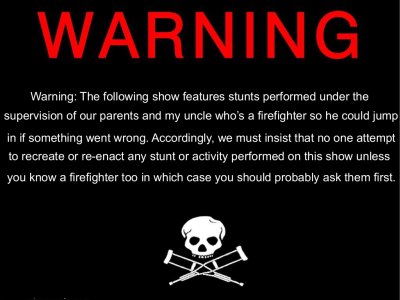 Hi my name is Jerry Goldfarb, and welcome to Pansy Jackass. Today I'm going to drive to work without wearing a seatbelt.

Alright, I'm in the car now and my seatbelt is off. I don't know if cops spend much time looking through windows or whatever so I put some tissues I found in the backseat up on my shoulder. I think it kind of looks like a seatbelt if you're not looking too close. I'm not super-worried about crashing, because if that happened it'd be better to fly out the windshield and die because my mom would probably kill me for wrecking her car anyway.

Whew. I made it to work. And I only put on my seatbelt that one time when traffic was slowing down quickly because I swear that guy looked like he was going to rear-end me but then he braked and I realized he wasn't as close as I thought. But most of the time I was driving without a seatbelt. My boss is going to be on my ass if I don't get in there though so bye for now dudes.

The Staying Up All Night Caper 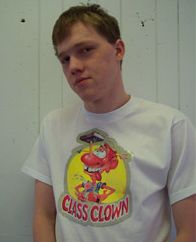 Hi this is Kyle Haines and I'm about to stay up all night. I've drunk like two Red Bulls so it shouldn't be that hard. I'm mostly probably gonna play video games and stuff but I'll check in every hour and let you know how I'm doing.

10:00pm: Getting started. This is fucking insane. I can't believe I'm doing this.

12:00am: I have a hundred kills against the bot in Perfect Dark already. I'm kicking ass, both in the real and virtual worlds.

1:00am: This is pretty late and I've been yawning a lot. Oddjob was totally an unfair advantage in Goldeneye though. I don't know what they were thinking.

Hi my name is Matt Boydon and this is Overdose.

I have in my hand three Tylonol Extra-Strength pain reliever tablets. Now the bottle says you should take no more than two. But what would happen if I took three? *Gulp* Too late. I JUST DID.

So it's been ten minutes now. I feel ok.

Twenty minutes. I feel a little bit queasy. The bottle says you should take it with some food or milk but fuck that shit, I'm crazy and I don't play by their rules. 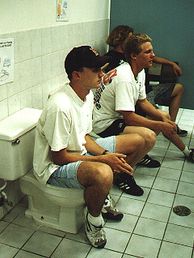 Forty minutes. I'm bored. This sucks, I wish I knew somebody who sold pot. I think my brother might have some in that old Monopoly box in his closet. I'm gonna go check.

Forty five minutes. Nope. Nothing there.

Hey, this is Jerry Goldfarb again. I got out of work and I noticed that I'm almost out of gas. But check this out: I'm going to drive all the way home without getting any even though the light is already on.

I've heard that you can go for like half an hour after it tells you to get gas and I'm already a quarter of the way home. It's fucking weird though because the needle is totally below the line. Why would they put the line there if it wasn't where the tank was empty? And why isn't there a line for when it's actually empty because I'm having to guess here and it's freaking me out.

Halfway there and I'm turning off the air conditioning. I don't know much about cars so I don't know if that'll save gas but I'm not taking any chances.

Yes! Made it all the way home. And yeah, I did end up stopping for gas but there would have been hell to pay if I had been stuck with an empty tank by the side of the road and my dad had to go bring me some, plus I only bought a little (only five bucks worth, because that's what I had in my pocket and I'm not allowed to get a debit card yet). Anyway, that was Running On Empty. I'm going to go heat up a burrito for lunch, bye.

Hi this is Matt Boydon and I'm going to bother the neighbor's cat. He's over in my yard again and I've heard that cat shit totally kills grass like faster than grass poison or whatever so let's annoy it and see what it does.

I have my friend Jerry over so he's going to help chase the cat to me. Here we go.

Update: we've got it cornered and I'm flicking its ears now, and- OH SHIT it just hissed at me. Ok, I'm backing up a little because- NO, I'm not a fucking wuss Jerry, shut up. Fine, look I'm getting closer again. I wonder what it'd do if I pulled its tail. 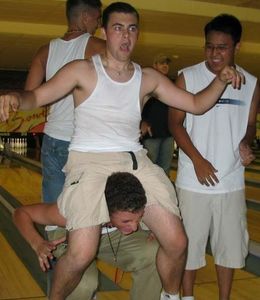 Hi this is Jerry Goldfarb and my friend Matt just got his hand scratched by a cat because he's a dumbass so I'm going to pour some rubbing alcohol right on it. I mean the hand, not the cat. The cat ran off. This is so fucked up. I can't believe we're doing this.

I'm not sure, but I bet this is going to hurt him. Hold still, Matt. Ooooh, yeah that definitely hurt him. He winced a lot when I poured alcohol on an open cut. Yeah...ok.

That was sort of pointless. I feel…a little ashamed.

Hi this is Kyle Haines and the yogurt I am holding in my hands has been expired for almost a week.

That's right, you know what I'm going to do next. Take a whiff of this stuff. It smells…well it kind of smells good actually. It's strawberry yogurt and it basically still smells like strawberry. Lifting up the spoon to my mouth…

Mmm…is this really a week old? It tastes new. I might have gotten the packages mixed up. No, the expiration date is a week ago. Maybe they got it wrong at the factory or something. Anyway, that was the Yo-Hurt Eat Off. Thank you.

Next Week On Pansy Jackass

Hi I'm Jerry Goldfarb and please join us next week where we will be continuing to push the limits to extremes you just won't believe. Next week is a special school themed episode. I will be asking out a girl to this dance next week, but she's a really popular hot girl so she'll probably say no. Meanwhile Matt is going to spend the day with his pants on backwards and ask guys in the bathroom to help him unzip so he can piss. Later, Matt will probably do a bit where he's beaten up by bullies who think he's gay. And Kyle is going to bring a really obviously fake note and try to get out of class with it. You won't want to miss this. Um, thank you for watching Pansy Jackass. And goodbye. Until next time. Bye. 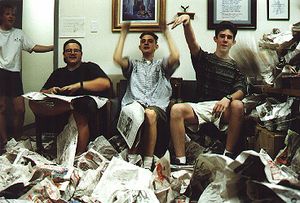