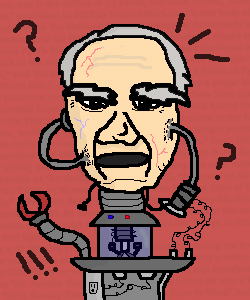 You know what really gets my goat? Bananas. Used to be you could go down to the corner grocer and pick up a bunch of nice, ripe bananas. Now, whenver I buy bananas, I get a bunch of green things that turn brown before I can eat them. And what happened to banana stickers? After I turned 140, whenever I would eat a banana I would place the sticker on my forehead and scream, “I am the banana king!” And let me tell you, my dog would have quite a hoot over it. Today, I’m not the banana king, and if dogs still existed, the one I had would be very upset. A bunch of sad, brown, phantom dog-depressing fruit for 2400 megacredits? Give me a megabreak!

STOSSEL_PROTCOL_INITIALIZED_I’ll tell you what bugs me more than bananas and the replacement of corner stores with ballistic food distribution cannons: Xanthor the Conqueror. Remember when we used to have Presidents? I sure do. Seems like whenever some lunatic in a spaceship lands in your country and beheads your leader, the most sensible thing to do would be to send the army right up his tailpipe. And now, 600 years later, I bet we’re all kicking ourselves for electing that bozo right on the spot. I guess when a fella wears a necklace made out of the faces of world leaders, everyone forgets about one important thing: character. 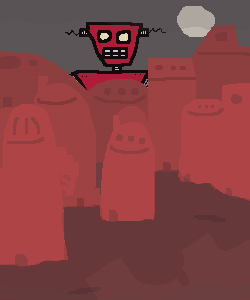 This brings me to the following subject. You know what I don’t get? The future. Sure, it looked good in Science Fiction and at the end of most history textbooks, but as someone who owns two homes in the future, I have to say that it’s an incomprehensible mess. Whatever happened to displays? I may be getting long in the tooth, but I remember when most computers actually had a little something called monitors. You’d go on the internet, order your orthopedic shoes, and you’d actually be able to see a picture of the footwear that would support the many fat-filled sacs on your body- but no more. Now, everything just has a cheap plastic overlay filled with meaningless colored geometric shapes. When I’m at the Pharmotron, am I really supposed to know which hue of red square represents my immortality medication? Heck, for a decade in the 24th century, I was accidentally taking estrogen! And you know what? I never felt prettier.

Speaking of the future, what’s with all of these terrible fonts? I know it’s the future, and things are supposed to be futuristic, but why is it that all fonts have to be so darn unreadable? Just yesterday I picked up a daily issue of the All Hail Xanthor Information Sheet, and you know what I read? Nothing. How am I supposed to know what dangerous and unknown planets we’re at war with when these jokers won’t even throw in a few serifs? Are they getting all of these fonts from pinball machines of the late 1970s? It’s ridiculous!