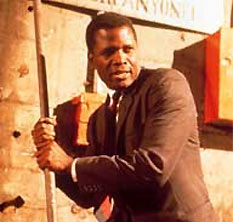 This picture of Sidney Poitier wielding a pipe in the movie "In the Heat of the Night" symbolically conveys the idea of my discomfort.Despite the misleading title of this article it really has nothing to do with brown outs, I just had to rhyme something with my new favorite fictional phrase "frown out". This Saturday it was "killer of the elderly" hot in Chicago. The mercury on our apartment's thermostat has been firmly topped out at 90 degrees for the past 24 hours or so, leading me to believe it is either exactly 90 degrees or somewhere between 91 degrees and the temperature at which the thermostat sublimes into gas. You can't fry eggs on the sidewalk because if you take them out of the refrigerator the sweat pouring off of your hands hard boils them.

"Zack, we are living in the 21st century - THE FUTURE - and we have futuristic conveniences like air-conditioning."

Well mystery speaker, I believe our apartment to have been the first building constructed when Russian settlers first found their way to the heartland of Chicago. It does not come equipped with futuristic conveniences like central air-conditioning. It comes equipped with brown bricks and centipedes, and you'll like it!

We are not without some ability to cope with this heat wave. Realizing that some people live in the urban equivalent of mud huts, enterprising retailers now offer "window air-conditioners" and "window fans". The window fans were the first to show up in our apartment, but they do little good seeing as how the air in Chicago seems to be composed of the pudding filler previously used in Teenage Mutant Ninja Turtles Pudding Pies. Hoping a fan will push that air at any decent velocity is like hoping to navigate one of those foot-pedal paddleboats across a lake full of quick dry concrete. In an environment like this, the blades of the fan spin and the air sort of falls out the front and pools on the windowsill. I like to scoop it up and pretend it's retro mutagen ooze and that my genes are going to combine with those of Michelle's cat.

This whimsical illustration of a man being electrocuted symbolically conveys the idea of my circuit breaker.Even though the fans didn't work we had the window air-conditioner to fall back on. Nestled snugly in the bedroom window it would at least allow the both of us to fall asleep tonight without turning the bed into a swamp of sweat. This assumes of course that the wiring for the apartment was not done back in the day when the telegram was still considered "raw and unrefined" technology. Naturally the wiring was actually much older, possibly predating the evolution of invertebrates, and the circuit breaker is only capable of controlling a bone-crushing 15 amps of electricity. This means our power goes out if we have the air-conditioner running and even think about turning our head in the direction of a light switch. I am pretty sure Saturday afternoon that the circuit breaker even mistook sun reflecting off a car outside to be a light on in our apartment and it once again cut off our power.

This would not be a very big deal if I could simply jog down to the basement and flip the circuit breaker. This solution would be far too reasonable though, and our landlord is ideologically opposed to things like common sense and reason.

I was all set to wait this problem out, like I do most problems, and just let it fade away or get so bad that it becomes a different problem that I can wait out. Then I checked the five-day forecast and saw that it's going to be even hotter on Monday and basically ectoplasm boiling for the remainder of the week. So I started brainstorming ideas on how I could beat the heat.

Buy a Generator
Diesel powered generators are a staple of any survivalist nut ball who intends to be able to play Super Monkey Ball on his Game Cube after the impending nuclear apocalypse has occurred. While I'm not really concerned with atomic annihilation and I don't own a Game Cube, a generator might be able to provide enough electricity to allow us to run an air-conditioner and have a Plug-ins air-freshener in an outlet at the same time.
Pros: Fresh smelling living room and cool air.
Cons: Expensive to buy and maintain. While the generator is running it will fill the apartment with diesel fumes.

Trick Homeless People into Fanning Me
If you live in a city you know that vagrants will do anything for whiskey and canned beans. I could stock our cabinets full of cheap whiskey and even cheaper cans of baked beans, and then approach homeless people with an offer of food and beverage. When they get inside the apartment (standing on a tarp of course so they don't spill vagrant on the floor) I will insist they fan me for one hour straight before they receive a bottle of whiskey and a can of beans. Interesting side note, we once bought a bucket for a dollar from a person sitting on a street corner. Unfortunately the bucket failed to make an impact on the temperature within our apartment.
Pros: Fairly cheap and the homeless man might take the opportunity to eat some of the centipedes in our apartment.
Cons: Homeless people are usually unfit for any type of labor that doesn't require drunkenly swaying from side to side and ranting incoherently. I could potentially rig a system of pulleys that harness the mechanical energy of the vagrant's drunken swaying and use it to power a mechanical fanning system, but this would likely be more trouble than it's worth.

Set Fire to the Apartment
This might not seem like a particularly logical decision, but the way I see it, fire has zero humidity. The air in the apartment has 100% humidity and is like sticking your face into a hot tub and trying to breathe the bubbles. If we set fire to the apartment the temperature might be two or three times what it is now, but it will be completely humidity free.
Pros: A dry heat, no more stewing in sweaty clothes.
Cons: Everything we own will be destroyed. The human body contains like 75% water or something and I think you need that to survive.

Sit in a Bathtub Full of Cold Water and Eat Ice Cream All Day
This heat has made me break from my normal routine of taking scalding hot showers. I've been turning things down so that the water in the shower is actually cooler than the air temperature. Sunday, while scrubbing the layer of solidified salt deposits off of my skin, I realized I could just fill the bathtub with the cold water and sit in it while I enjoy my favorite summertime dessert; ice cream.
Pros: Ice cream tastes good. Cold water feels good.
Cons: Ice cream makes you fatter. Cold water makes you look like an old man. While I'm starting to feel old at 24 I don't relish the idea of becoming a fat old man just yet. Also my computer can't be plugged into the outlets in the bathroom, something about an electrocution hazard.

Break Open CO2 Canisters with a Hammer
CO2 canisters are like pirate treasure chests filled with Spanish cold. You can find them inside a number of different products ranging from cartridges for pellet guns to environment safe hairspray cans. I will fill a sack with these canisters and one by one break them open, basking in the cool compressed goodness they emit into the air.
Pros: They will cool me down. The loud banging might frighten away the centipedes that form a menacing circle around me at all times.
Cons: I may blow my hand off. It's hard to guarantee that it's just carbon dioxide in those canisters, it could be any number of deadly substances. I hope to be okay as long as I stop the instant I begin to hallucinate.

Right now I am leaning towards either buying a generator or breaking open those CO2 canisters with a hammer. If you have any additional suggestions, please, let me know! I will be waiting patiently for your input in a spreading pool of my own sweat mixed with writhing centipedes.

You Hate Me! You Really, Really Hate Me!

Rich "Boss Hogg" "R-Lo" "Kyanka" Kyanka has taken the time to sift through the more than 200 hate mails I received when I wrote my review of the movie "The Lord of the Rings: The Fellowship of the Ring" for our new Truth Media section. I took a very critical and objective look at the movie, and instead of seeing where I was coming from a lot of people who were caught up in the hype decided to send me angry letters. Oh, did I mention that I intentionally got a shitload of facts wrong about the movie? Yeah, that might have contributed to their outrage. 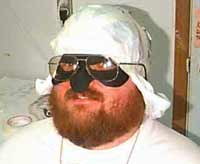 Number ten: "Orks" is misspelled. It is spelled with a "c", as opposed to a "k", and Orcs were NOT coming to the Shire for the ring, you blasphemous idiot.
Number eleven: you're the most mentally defficient person I don't know, and I don't know alot of them. They are Ringwraiths, in the service of Sauron, not Saruman, who is the white wizard.
Number twelve: Rivendell, or Imladris if you will, is not an elf city, but the house of the elf-lord Elrond, you seething zit of putrid slime.
Number thirteen: They do not go to Rivendell to discuss how the Orcs should be driven away, but to discuss what should be done with the Ring, cheese dick. Ok, a slight beef here that isn't your review, but the movie. In the book, Legolas helped them escape from the Black Riders, not Arwen, and the only reason they changed it is so they could give that pouty bitch a bigger role.
Number fourteen: the Ringwraiths are not fought of with ANYONE'S sword, but are washed down river by a flood mustered by Elrond (in the book); Arwen (in the fucking movie).

He doesn't stop at fourteen folks, it goes on a lot longer. One thing I think we've all learned from the response to this review is that not only are "Lord of the Rings" fans obsessively defensive of their film and full of encyclopedia-quality nerd knowledge about it, they are also really bad spellers and shitty at being insulting. Head on over and see what else they found wrong with my review! It's like the solutions to a "Where's Waldo?" book for angry thirty year old virgins!