Actually, It is Buckley Carlson Who is the LabiaFace 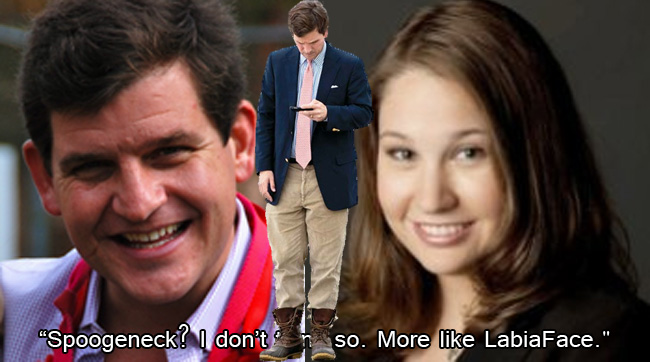 Tucker Carlson's brother Buckley caused controversy this week by doing the old "reply all" trick to an email chain and making some nasty comments about New York Mayor Bill de Blasio's spokeswoman, Amy Spitalnick. The fact that Spitalnick was in that email chain might have been why the world now knows that Buckley Carlson called her a "Whiny little self-righteous bitch" and went on to mock her name and her face.

"And with such an ironic name, too... Spitalnick? Ironic because you just know she has extreme dick-fright; no chance has this girl ever had a pearl necklace. Spoogeneck? I don't think so. More like LabiaFace." 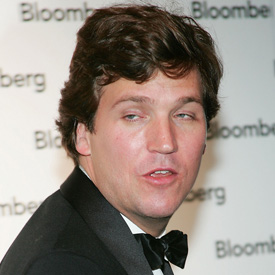 Public outrage and charges of misogyny in journalism ensued.

Those might be fair charges, but this email is not symptomatic of some larger problem in the media in this case. It's symptomatic of the fact that Tucker Carlson and his brother are frat-faced subhuman smirkers probably cranking their needle dicks over liberal outrage.

They love it. The Daily Caller is the outfit that got White House credentials and proceeded to send a reporter to heckle an Obama speech where the guy repeatedly interrupted Obama mid-sentence by shouting to ask the journalistic equivalent of, "Why do you beat your kids?"

Buckley isn't a real human first name. It's what Mike Huckabee would name his pet beagle. The one his humongous son would eventually sentence to death by hanging for the crime of not being another ice cream sandwich. Tucker Carlson also named his son Buckley, which I'm sure causes some confusion around the holidays when everyone is trying to decide who gets the monogrammed "Buckley" golf cart.

Pretty ironic name, too... Swanson? More like Shrekson. Face like somebody started making it and decided to stop halfway through. No chance this guy has ever put his mouth on a swan. Not even part of one. Pussyson? I don't think so. More like AssDad. Because this greased down dad was born out of a butt. 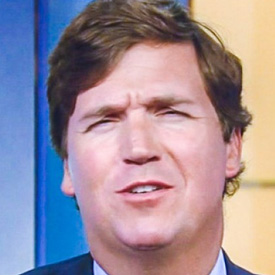 Oh, yeah, that Swanson name? That's the Swanson that makes the shitty TV dinners. I know this is going to blow your mind, but Tucker and Buckley are a couple of trust fund fucks, loafing their way through life, boarding school, and then dropping right out of college and right into a libertarian think tank.

Tucker is the libertarian, the one who looks like exactly the sort of dude just waiting to get into an argument about the definition of rape or who considers the EPA one torture chamber short of the Gestapo. Buckley is more lazily political. The sort of WASP trash man you'd see in boat shorts and a polo shirt guzzling white wine and sucking crab legs on a pier somewhere in the Hamptons while he talks about immigrants. I'm sure he likes to catch marlins in Key West like he is some sort of actual fisherman and not the guy who pays Juan, the fishing guide, to reel in a big one.

Buckley bills himself as a political strategist even though the last time he held that job was with a company called Kelton back in 2008. He writes for the Daily Caller now, barely, turning in a total of seven articles in three years.

Buckley Carlson is a failed political strategist freeloading on his brother's career. His brother who has been fired from CNN, MSNBC and now spends his time literally falling asleep on the set of the fucking weekend edition of Fox and Friends. The guy who runs a trust funded news website that has explicitly forbidden writers from criticizing Fox News under any circumstances. Thanks to family money, neither of them has ever been challenged to achieve anything much other than oozing their slime into the public discourse.