The TV Shows That Died Young 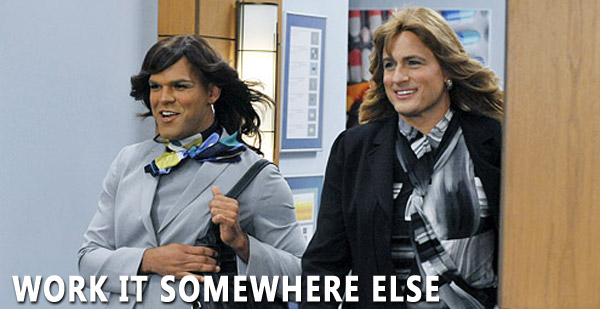 It can be hard for a television show to survive its first season. Even with the proliferation of cable, the need for a show to succeed almost immediately is intense. Ratings decide the value of advertising dollars, so low ratings, or controversial content, can drive advertisers away. Some shows are so ill-conceived or ill-fated, they don't even survive past a second episode.

Such was the case with ABC's conceptually repellent and practically unwatchable Work It. It survived two episodes, although it was doomed as soon as the first teasers started running on TV. Reading the shitty concept, it's easy to imagine the sequence of events that started the gears turning in the coke-holed brains of show creators Andrew Reich and Ted Cohen.

"Work It centers on two unemployed men who believe that the current economic recession and job shortage has affected men more than women. Lee Standish then decides to apply for a job at Coreco Pharmaceuticals dressed as a woman and is hired."

Andrew saw a statistic that said more men have been laid off than women and thought, "Hey, let's use this bullshit I just saw on my AOL homepage to bring back Bosom Buddies." Hey, it's current, right? People out of jobs doing humiliating things to find work? Only now America isn't supposed to be laughing at dudes dressed as women. That's a thing, you dipshits. Not that cross dressing was ever funny at all, but now it's bad to even try to make it funny.

We all think of TV as pretty horrible, but generally TV shows only make it to air if they cross some minimum quality and/or conceptual appeal level. This is usually a deadening process that hammers the edge off the comedy or drama and presents a predictably pasty slurry to the TV-watching public. Whenever anything exceptionally good or exceptionally bad makes it through it means the TV vetting process has failed. The only recourse is swift cancellation, depriving us of witnessing some of TV history's greatest forgotten misfires. In honor of the recently departed Work It, I would like to celebrate a few of those lost TV shows.

Jackie Gleason's lame attempt to make easy TV money by hosting a game show resulted in an infamous cancellation and on-air apology after just one episode. You're in the Picture's premise was terrible. Celebrities would stick their heads through a cardboard piece of famous art, like one of those wooden cutouts kids stick their heads through at a fair, and the goal was to guess the piece of art by asking Jackie Gleason questions.

Everyone, including Jackie Gleason, was confused by the premise. It was made worse by the fact that the celebrities were almost always able to see what their artwork was by moving their head. The reviews were so scathing that the network wanted to dump Gleason, but his apology set things straight. Following the cancellation of You're in the Picture, Gleason returned to do eight more episodes of a talk show format.

What do you get when you cross Glenn Frey (of The Eagles) with a black guy doing a 1990s version of a minstrel routine? South of Sunset, the heavily-promoted, instantly-cancelled turd in which Frey plays a private detective partnered with Ziggy Duane, a hilarious, wise-talking black dude played by Aries Spear (who you surely don't remember from his seven seasons on MADtv). The show features embarrassing opening credits that serve as an unwitting parody of every TV show intro from 1989 to roughly 1997.

The show's premise wasn't really ridiculous at all, but its stunt casting failed to attract any audience and it was cancelled after one episode's dismal ratings. The six-episode run was eventually aired on VH1.