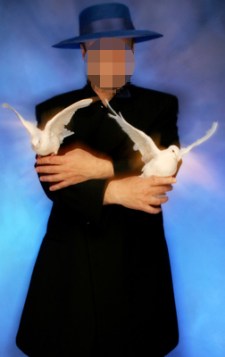 The bloated and power-hungry cabal of professional magicians doesn't want you to know a shocking truth: Magic isn't real.

Those foul bastards propagate an age-old lie in order to fill their coffers with money and neverending scarves. They take advantage of their audience by allowing them a momentary escape from the real world, returning them to the sense of wonder and mystery that they knew as children.

This must be stopped.

Upon infiltrating the highest levels of their corrupt society, I learned the secret methods behind every magic trick from the last hundred years. Then I made my escape, vanishing before their very eyes - but only after explaining to them that I wasn't actually using magic to disappear.

Now I am on the run, surely hounded by an industry that will do anything to keep the secrets in my head from getting out. I wear a black ski mask at all times to hide my face. I carry a symbolic broken magic wand. My velvet cape has a large icon sewn across the back, a red circle with a line through it superimposed over a rabbit being removed from a top hat. They will never find me.

As I write this I am at a Waffle House in Memphis, the one on exit... oh. No, I don't think I'll be sharing the exit number. They could use that to find me. Better to keep this vague.

The point is, they ran out of waffle batter. I have a few hours to spare while I wait for the refill delivery to arrive, so I might as well use this time to fire the first salvo in my war against so-called magicians. Get ready for some secrets.

Sawing A Woman In Half

Perhaps you're familiar with the most iconic magic trick of all time? Known in magician circles as Not Really Sawing A Woman In Half?

A woman lays down in a box. Her head protrudes from one end, her feet dangle from the other. Not a very good box, all things considered. A saw dramatically works its way through the center of the box until it appears that the woman has been bisected. After the two halves of the box are separated (the woman's feet still wiggling) they are brought back together and the woman emerges in one piece.

Here's how it really works: The "woman" is actually two people. One is a woman with no lower half of her body. The other is a woman with terrific legs and a waist but no torso or head. Before the show, the first woman perches atop the second and they don a dress.

When the women lay down in the box, they are replaced by a pair of identical automated mannequins which move about realistically during the trick. When the box is put back together, the women replace the mannequins.

The Coin Behind The Ear Trick

This one is certainly a classic, and the methodology behind it is so simple that you'll kick yourself for not figuring it out. 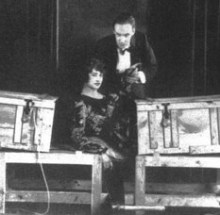 When the performer reaches behind the mark's ear (a mark is the target of a one-on-one magic trick), it appears that their hand is empty, but it's not. Expertly hidden between two of the magician's fingers is a small object: A telescope.

As the performer's hand pulls back, the telescope is perfectly lined up between the mark's eyes and a carefully placed miniature coin hidden across the room. From the mark's point of view, the coin is normal size and is in the magician's hand.

This one's really popular among street magicians, as it requires a surface to stand on.

A performer gathers a small crowd. He or she makes sure that the audience is situated at a specific angle, then adopts a look of extreme concentration. After a few moments, the performer seems to levitate!

We're supposed to believe that the magician is being hoisted by some mysterious power. How is it really done?

Just before "levitating", the performer tenses the muscles in their legs, then applies downward force. This pushes them away from the ground for a few spectacular moments that seem to defy gravity.

A jump, if you will.

Many magicians love to close their acts with some variation of this seemingly impressive trick.

The audience is seated with a clear view of a large object. Perhaps it's a skyscraper, an aircraft carrier, a monument, or a statue of a very tall man.

Dramatic music plays, and the magician closes a pair of curtains in front of the audience. The curtains open, and the large object is gone! The curtains close then open once again, and the object returns.

Magic on this scale seems too big to fake, but it's not. Here's what really happens.

Mirrors. Hundreds of them. Every person in the audience is in reality a reflection of the performer.