Cats Are Where It's At 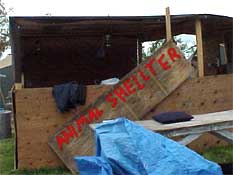 One of the more "state of the art" animal shelters.

Recently I contracted some sort of cortex-melting brain disease and consequently suggested to my fiancé, Emily "Integral" Reigel, that we purchase a new cat. This cerebral-liquefying virus seems to be manifesting itself more frequently as the days go by; for example, last night I suggested we rent "Scanners 6." As you can tell, I am in dire need of help, assistance that can only be provided with a shotgun blast to the face. I'll try to do it next to a mannequin so then my face parts will fly off and land on the mannequin's head, creating what appears to be a bloody, disfigured, potentially more disgusting version of myself... with mannequin tits!

Anyway, we headed to the animal shelter to purchase a brand new kitten about a week ago. We refuse to buy any pets from those horrible mall pet shops because of the inherent animal cruelty they regularly expose their defenseless animals to. Only horrible creatures like Carrot Top or Louie Anderson should be trapped inside a Plexiglas cage so people passing by can mock and make faces at them. Unfortunately, animal shelters are easily the most depressing buildings created since the National Jewish Holocaust Hall of Fame or whatever that place is called. Since they were designed by King Lucifer himself, each and every animal shelter shares the same characteristics:

Walls constructed from uncolored, unpainted cinderblocks which occasionally feature a poster with a dog shitting and the caption "CLEAN UP AFTER YOUR POOPING PET, YOU GODDAMN JACKASS."

State workers consisting of large, fat, white women wearing clinical smocks and slowly stumbling around like a Weeble Wobble in a sand trap.

An elderly sheriff who sits in the background and constantly uses the copying machine for no particular reason. I'm not sure why the elderly sheriff is always there making copies, but apparently pet shelters are hard up for armed office assistants.

Hundreds of "mature" cats crammed inside small cages. Nobody buys the "mature" cats because it's common knowledge that "mature" means "a real stubborn asshole which will try to kill you when you bend over to pet them."

Hundreds of "mature" dogs crammed inside slightly less small cages. These animals constantly run around in circles really fast because they're trying to wear down the concrete below them and escape to a more pleasant place, such as their own grave. 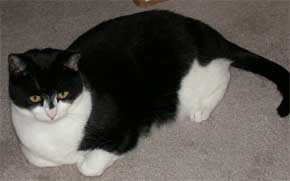 Our previous cat, named "Cat" as to avoid any confusion with other animals. Note that both him and I are getting fatter each photo.

Emily and I perused through the cat aisle and eventually reached the kitten section. There were three kittens lumped into an extremely large cage, one big enough to fit both Louie Anderson AND Carrot Top. I proceeded to begin my "kitten detection test," which consisted of acting like a retarded buffoon and observing how the animals reacted. One of them fell asleep, another started eating food, and the last one jumped onto my head and began purring. I'm sure you can guess which one we chose.

Once we hauled the kitten home in his brand new "mobile cardboard box of shame," we were faced with an immediate, pressing problem; how do we introduce the kitten to our current cat (who used to be named "Spaz" but now only responds to the word "Cat")? We placed the sealed box on the ground and let Cat check it out; he responded by instantly crouching down and producing a series of sounds that resembled a live baby being shoved into a garbage disposal. Our attempts to soothe his fears by speaking English and saying "it's okay" followed by "it's okay, stupid" didn't seem to work, as the baby-garbage-disposal sounds soon morphed into what I can only describe as a sick theremin being played through Metallica's speaker system. We weren't aware any creature of any species had such a wide range of possible vocal tones, and I'm still convinced that Cat was directly summoning the sounds from hell itself. Regardless, the initial meeting wasn't exactly a huge success. We separated the cats into two separate rooms and let them smell each other under the door. Cat continued to make "Luciano Pavarotti caught in a meat grinder" noises while the kitten tried to chase individual oxygen atoms around the room. Within the next week, we learned a considerable amount of knowledge regarding the process of integrating two cats into a new environment. Let me give you a few pointers to help out next time you think of introducing a new cat to your happy / unhappy / suicidal home: 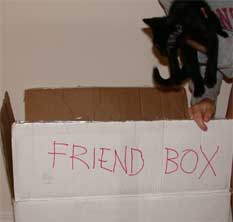 The puking bastard is being lowered into the always helpful "Friendship Box."

The easiest way to let two cats bond together is to unite them against a common enemy. We suggest hiring Richard Kiel who played the character "Jaws" in "James Bond: The Spy Who Loved Me," in addition to the blockbuster smash hit "Eegah." If you cannot gather enough change under your couch cushions to hire Richard Kiel, then buy a cardboard cutout of him, hide behind it, and scream "RARRRR! I WILL EAT YOU KITTENS BECAUSE I AM RICHARD KIEL! RAWWWR!!!"

Find a small, empty cardboard box and write "FRIENDSHIP BOX" on it. Place both cats into the box, seal it shut, and then leave them in there until they stop hissing and fighting with each other. If they continue to attack each other inside the Friendship Box, kick it around and throw it down a flight of stairs to punish them for being bad. It's safe to open the box once they stop making noises or some sort of liquid begins soaking through the bottom.

When one cat falls asleep, pick up the new kitten and drop it on his head. This will work wonders and boost their relationship to levels previously unheard of.

In addition to the Friendship Box, purchase a large bell and label it "FRIENDSHIP BELL." At random intervals throughout the day, begin ringing the bell like a madman and shrieking "BE FRIENDLY! BE MORE FRIENDLY!" while having a friend clang pots and pans together or light off fireworks in your livingroom.

NEGATIVE CONDITIONING: Cats are often afraid or threatened when encountering a new cat. Keep a can of mace nearby to spray in the eyes of the cat who acts threatened; this will condition him to stop acting like a fucking wuss.

POSITIVE CONDITIONING: Associate the smell of the new cat with something positive and enjoyable. Draw a line graph of the Dow Jones Industrial Average rising to unprecedented heights and staple it to the side of the new kitten. If you can't draw line graphs well, repeatedly point out how low interest rates are these days.

It's a proven scientific fact that cats use their claws to claw each other. Go to the veterinarian's office and demand your new kitten's claws be removed and replaced with gumdrops. This will create a flavor fiesta for both cats and aid them in their quest to get along.

On a similar note, shrieking and trying to claw a cat in the eyes is a sign of communication between animals. Whenever your cat tries to critically injure your other cat, reward him for attempting to communicate with his new friend. Punish the other, non-communicative cat with repeated shocks from a taser. 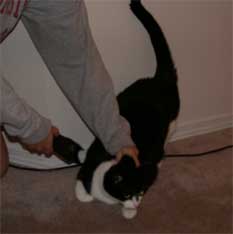 Cat's behavior is being corrected with a taser, thereby enforcing "negative conditioning."

We, unfortunately, had to learn these helpful hints through our trial and error period, so I hope they are at least some aid to all you future multiple cat owners. Another thing that we didn't know when purchasing this kitten was that animal shelters don't really give a crap about their animals' health. After a few hours of playing with the new kitten, we noticed something disturbing in his ass region (and no, we don't routinely look at animal asses): he had assworms! These parasites, technically known to eggheads and scientific bozos as "heartworms" apparently wormed their way into our kitten's precious tiny heart! He began dropping parasite segments all over the floor and counter, little bundles of joy that resembled rice. Moving rice. Slimy, disgusting, ass-dwelling, living rice. Since I'm writing this while eating dinner, I won't go into any further detail here, but let me conclude by saying the problem has been taking care of. And no, we didn't resort to using flamethrowers ala "The Thing," mainly because Emily won't let me use the flamethrower indoors.

After fighting through "Project: Assworm," the kitten began a hilarious new trend: producing copious amounts of sticky fluid from his eyes and nose. I don't think I've ever produced as much mucous in my entire life as the kitten did over that four-day span. He would routinely stumble around the apartment with eyeboogers the length of icicles hanging off his face. If we were to press his face against a glass window, there would undoubtedly be an exact replica of the cat's face left in mucous paint across the glass. We found out that this was some generic kitten disease that they pick up at - now hold your breath here, this will blow you away - THE ANIMAL SHELTER! What a surprise! I think every donation and payment to purchase a pet goes into buying more paper for the sheriff to copy documents onto.

But wait, that's not all! During his mucous period of happy funtime, the kitten found it enjoyable to randomly puke up food in select locations throughout the apartment! I can't explain the joy of walking into the laundry room and being greeted with a log of cat vomit; it's kind of like a really bizarre, disgusting, mutant Christmas celebration to punish people who have done incredibly horrible things.

So there we were, sitting around with our kitten, the little puking bastard, who had horribly repulsive items dropping out of each and every available orifice. Assworms from behind, mucous from the top, and vomit from the front. We were contemplating placing him on a record player and setting it to high speed, thereby creating the world's most foul sprinkler of disgust. Fortunately we instead decided to treat all his symptoms and nurse him back to health, the state he currently resides in. No more assworms, eyeboogers, or puke... we must be doing something right.

Once we stabilized him and successfully allowed the cats to befriend each other, we faced our next problem: what to name him. "Puking Bastard" was too long and "Assworm Machine" wouldn't be a good idea, particularly when calling him around dinnertime. Then, one night, we came up with the perfect name. I was searching all across the apartment for the kitten, as he disappeared what seemed like twelve days before and I had no clue where he was currently looking. Soon I enlisted the aid of Emily to help hunt down the elusive feline, but neither of us could track the little snotball down. Then, right when we gave up, we looked behind the television set. There, crouched in the darkness and staring silently at us with glowing eyes, was the kitten. From that point, both of us instantly knew what his proper name should be: "Satan." Ladies and gentlemen of Something Awful, please welcome Satan to our ranks!

What's All This Goldmine Hullabaloo!?!

The Something Awful Forums goons have been working hard again, and this time they have come up with a series called "Bonzi Buddy Mayhem." Basically, it shows inconvenient or disturbing times that the dumb spyware monkey can pop up in a mist of despair and lies. Damn Bonzi Buddy. 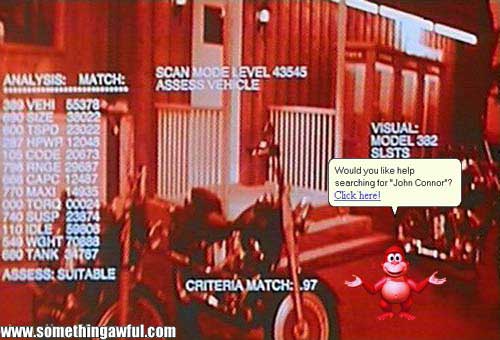 Go to the Goldmine and look! If you don't, we'll cut out your eyes and pour bleach in the sockets!!