The Something Awful Consumer Advocacy Group

For whatever reason, we've been sued three times over our logo, something about "Trademark Infringementation" or something.For decades we here at Something Awful have been working to provide a voice in the marketplace concerned with the safety of consumers. In our 60+ years of work digging into the closets of dozens of different corporations and their products we have uncovered some of the most scandalous manufacturing oversights, quality assurance problems, and blatant corporate apathy for consumer safety. Up until now we have done our work from the shadows. We have contributed to a number of various other, much less successful, consumer advocacy groups by feeding them a steady stream of product alerts. I do not want this article to be overly concerned with our past; it is more of a statement about the bold path we plan to forge for you in the future. However, for a moment at least, please allow me to share some of our past achievements with you.

In 1884 the SACAG reported to the American Health Institute that having your picture taken by a camera would jeopardize your soul, possibly causing it to become trapped on the film stock. While this warning went unheeded, in 1911 when color photography was first introduced we repeated the warning that color cameras had ten times the soul capturing potential of a standard black and white camera.

In 1926 the artificial sweetener saccharine was popularized. The SACAG was the first to report on its dangerous properties which included a risk of cancer, increased infant mortality, and susceptibility to "the vapors". When Nutrasweet was introduced much later we also reported on the risk of cancer, diabetes, heart disease, tumors, increased infant mortality, potential mental retardation, spontaneous combustion, and several other fatal diseases like Lupus and Mummyitis that can also be caused by Nutrasweet. Nutrasweet is in fact the world's deadliest chemical compound, far more lethal than cyanide mixed with high molar carbolic acid.

We warned the world about the dangers of owning Japanese made automobiles. The world chose not to listen and it's paying the price now on the funeral pyres of Imperial Japan.

Cellular phones kill more people every year by boiling their brains and internal organs with powerful microwaves than were killed in the attack on the World Trade Center. SACAG discovered this by placing cellular phones in microwave ovens and causing "reverse microwave radiation flux" which destroyed both the cellular phone and the equally deadly microwave oven.

We discovered that improperly sized hats can cause deadly "brain malformia".

SACAG was the first to make the correlation between the sun and blindness and our study prompted the creation of the first anti-sun visors or "sun free glasses".

Our researchers observed in field studies that one in ten Americans experiences debilitating swallowing trauma because of accidents caused by Doritos and other dangerously angular corn snacks.

As a direct result of our research into the dangers of smoking warning labels were placed on packages of cigarettes. These warning labels, while a decent start, do not include adequate information about other potential risks of cigarette smoking like Inverse Babytosis (causing babies to be born inside out) and second-hand skin meltolosis.

Remember the great Dannon Yogurt recall of 1985? SACAG undercover operatives discovered that Dannon Yogurt consisted of 20% or more (by volume) horse urine. We blew the lid off those scumbags with our hidden camera footage.

As you can see the SACAG has a long and illustrious history of looking out for the best interests of you, the consumer. Despite all these achievements we are not about to rest on our laurels, especially since the dangerous products are being unleashed on the marketplace more quickly than ever before. We are coming out of the shadows and we are doing so with a vengeance, taking the war back to the immoral corporations who are churning these things out.

In the hopes that we may positively affect even a single life, whether it is to save it or to make it more cautious when shopping, I am now releasing the first ever SACAG Consumer Alert List. This list covers upcoming releases for 2002 through the second quarter of 2003. We may need to post updates and bulletins until our next list is published in 2003 and will remove any items from the list when issues have been addressed and the product has been made safe.

If helping around the house with your cudgeling needs includes starting devastating house fires, then look no further than Cudgelilo from SonyCategory: Home Appliance
Manufacturer: Sony
Manufacturer's Description: Are you tired of backbreaking home cudgeling chores? Do you sometimes just wish that all those things that need cudgeling around the house would just get up and cudgel themselves? Well now they can thanks to Cudgelilo! Cudgelilo is the first in a series of intelligent companion robots from Sony which are specialized in tasks for helping you around your home or office. Cudgelilo is capable of deploying his attractive titanium cudgel against over 500 hard-to-cudgel objects including bananas, raw meat, unwanted skulls, windows and light fixtures, intruders, obstreperous pets, and even canned fruit! Cudgelilo possesses a 90 word vocabulary out of the box and can learn up to 1000 words total. He never gets tired of doing your cudgeling for you, and will always respond to your cudgeling commands politely and obediently.
Consumer Alert: Cudgelilo is equipped with an advanced sensor suite that is prone to failure and misidentification. The main hazard posed by Cudgelilo is that his sensor will malfunction and cause him to identify a flammable object as non-flammable. He will then begin to cudgel it, bursting into flames and incinerating your entire family horribly while they sleep. We are also currently investigating a possible correlation between child cudgel injuries and families who purchase Cudgelilo.

Product Name: The Ticking Turban
Category: Toys and Games
Manufacturer: Mattel
Manufacturer's Description: Uh-oh, that Turban is Ticking and when it stops you might just lose your marbles! Fill the marble reservoir with our fun safe rubberized marbles and set the Turban-o-meter to "excitement". Watch as your kids try to empty out the marbles franticly using the Turban Tweezers! Better hurry before that ticking stops!
Consumer Alert: Manufacturing defects in the Argentinean plant that produces the Ticking Turban have resulted in a number of Ticking Turban sets with the Turban-o-meter replaced with live deer or wood ticks. While the manufacturer suggests an age range of 6-12 for children playing this game, children under the age of 16 are actually the most susceptible to tick-borne diseases. 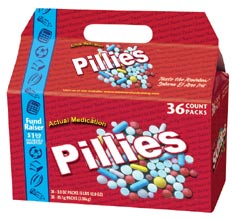 This snack may cause dryness of mouth, head aches, or mild nausea, symptoms identical in clinical studies to those given a sugar pill.Category: Snack Food
Manufacturer: The Mars Corporation
Manufacturer's Description: If you're ready to ride the flavor rollercoaster to the enchanted land of Tasteonia, then pick up a box of Pillies! These candy-coated treats are fun for the whole family! Eat a whole handful and the rollercoaster might just continue straight through the land of Tasteonia and into the magical realm of Hyperhydrosisville! Five fun-filled flavors that cling to your spinal chord like vertebrae monkeys! Cherry-monoperoxidedifalus, grape-sulphuroethyltrietone, orange-bromide, raspberry-drexlepoxy, and lemon-lime-etheramphetamine!
Consumer Alert: This candy actually consists of mixture of prescription medication recovered from the homes of dead patients and mislabeled medication which is non-resalable. The pills have been coated in a crunchy candy shell. For children it can be deadly, for adults the potential benefit of getting extremely cheap medication is slightly offset by the fact that each package contains a guaranteed cocktail of death.

Product Name: Cursed Sword +3
Category: Security
Manufacturer: Lich Queen Madroggar
Manufacturer's Description: This sword will blow the socks off the competition! Forged in the fires of Hell Keep's armory and quenched in the blood of a righteous man, the sword is not normal. It is not plus one! It is not even plus two! The Sword of Madroggar is plus three!!!! Are you having trouble hitting that heavily armored intruder because your strength is too low? Worry no more! Fighting off even the toughest opponent is no problem thanks to our unique PLUS THREE construction!
Consumer Alert: While the sword actually does confer a plus three bonus to hit on the wielder, it also reduces the users hit points to one. In addition the sword will remain bound to the user once taken up and cannot be discarded. While some health specialists believe the application of a remove curse spell or Ondinluk's Ether of Decursing may allow the sword to be dropped, we feel it is best not to take chances. 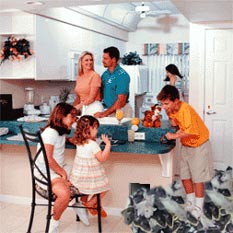 As far as rat-related home furnishings go, the Rat Hatch from Ratco is one of the least safe on the market today.Category: Home Furnishing
Manufacturer: Ratco
Manufacturer's Description: Ratco continues its proud tradition of bringing the finest rat-related kitchen and bathroom upgrades to you with it's latest Rat Hatch! The Rat Hatch consists of a small rat-accessible door and an easy-to-refill "rat chamber" mounted inside your kitchen or bathroom cupboard. Purchase of a Rat Hatch includes a free one year supply of "rat eggs". Just pour them in when the rats have all exited through the hatch and in a matter of days you'll have rats swarming out once again!
Consumer Alert: Rat home furnishings are big business in Japan and are just gaining popularity in the United States. The rats are all perfectly safe, lab-bred to prevent aggressiveness, and while their droppings may prove a nuisance to some, most in the market for a Rat Hatch would say this is more than offset by the feeling of knowing that at any moment a massive swarm of rats might burst out of your cabinets. The dangers of the Rat Hatch are actually twofold and related to the construction of the device and the "rat eggs". The "fun corridor" through which the rats emerge is prone to clogging with rat excrement, causing the rats inside the hatch to die. Their decaying corpses represent a health risk and only a Ratco certified technician can gain access to your rat supply. Since rats do not actually lay eggs Ratco has created "rat eggs" which consist of soft sedative-laden shells molded around baby rats. The warmth of the Rat Hatch will cause the baby rats to awaken and chew through the shell to freedom. They will then eat the remains of the shell until they reach maturity at which point they emerge from the Rat Hatch (barring obstruction as previously mentioned). However the residue left behind by the egg shells consists in part of macro-benthic material which can prove extremely hazardous if ingested or inhaled. Frequently, after prolonged exposure, it will cause seeping lesions to form on the lungs and within the circulatory system.

Please remember the Something Awful Consumer Advocacy Group does not receive any funds from corporations with the exclusion of StateOg and Arlogeist, GmBH. We rely on donations from concerned citizens just like you and a moneymaking e-mail scam involving the wife of a Nigerian president. This keeps us "interest free" and concerned with one thing: your safety! I hope this list has proved as useful to you as it has to me when purchasing my next snack or home rat accessory.

Resident computer and gaming expert Jeff K has once again applied his more artistic side to a project for Something Awful, creating several new installments of his "JEFFK.S"S BETTAR THAN PENNEYE ARCADED!" comic. Head on over and have a look at what this superstar of comedy has conjured up!

The sad part is that his comic actually is much better than Penny Arcade. If you don't believe me, read some more for yourself!