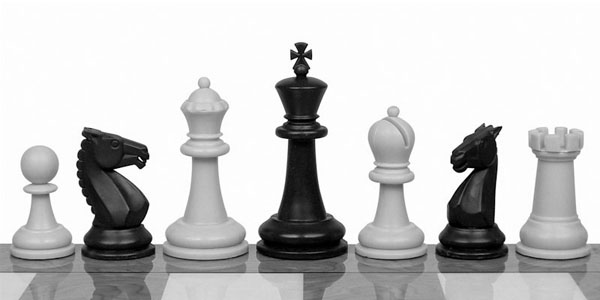 1828 Rule
Often considered the founding premise of modern chess play, the 1828 rule (named after the year of its invention) states that players shall make their moves in turns, rather than simultaneously.
Bishop Phasing
An advanced experimental technique for switching a light-square bishop to a dark square (or vice versa) by moving it in a four-dimensional "box step" pattern over six moves. Thusfar, this technique has only been executed by the Theoretical Chess department at UC Berkeley; the resulting bishops were highly unstable, decaying into pawns after only a few milliseconds.
Board Scratch
A foul that occurs if a player touches his opponent's piece without first touching his own piece; his opponent is then allowed to move his queen anywhere within his first four ranks and take a free turn.
Cold Lamping
A tactic in which one player demeans his opponent by allowing the timer to run out without making any moves, thus proving that he doesn't care about the match and cannot be intimidated. Ranked as a draw in tournament play, unless the cold lamping player flinches during the process.
Dog Chess
A match played using live dogs as pieces; in tournament play, the dogs cannot be touched, and verbal commands can only be issued in standard chess notation. Until the 1960s, captured dogs were usually euthanized immediately.
Double Blind Chess
A tournament match in which the two players are in separate rooms and are allowed no contact with each other; the chess board is in a third room. Each player must play the entire game out mentally, in solitude; the winner is the first player to declare checkmate.
False Check
A technique in which a player seems to put his opponent's king in check in order to force a response, but in fact that player had no sincere intention of harming his opponent's king.
Gentleman's Chess
A match played with a fork and knife, following all standard rules of both chess and formal dining etiquette.
Mad King Strategy
A strategy whereby a player makes irrational and aggressive moves with his king, often with the intent of rushing to the front lines and checkmating the opposing king singlehandedly.
Miraculous Pawn
A pawn that by divine providence suddenly and arbitrarily gains the ability to move to any space on the board and capture any piece; usually, the player in control of the miraculous pawn will capture the enemy king immediately. All but a handful of tournament matches between 1902 and 1924 were won on the first turn by Miraculous Pawns; it was accepted practice that the starting player could simply declare checkmate immediately, and it would be understood that one of his pawns had been empowered by God. The practice finally ended when the Fédération Internationale des Échecs was formed by disgruntled skeptics who refused to allow heavenly influence during tournament matches.
Ouija Knight
A knight that guides the player's hand to its intended position through unknown occult forces. Note that this only works with knights, as they are the only vessels strong enough to channel the energies of life and death.
Pawn Wedding
A scenario in which two pawns of opposing colors face each other in the same file for more than six turns, thereby becoming Wedded; both pawns are removed from the board and replaced by a single tiny grey Bastard Pawn, which can be moved in either direction by either player.
Peaceful Finish
Achieved when the two players negotiate a checkmate at the start of the game, thus avoiding the loss of any pieces.
Reverse Chess
A variant in which both players start in mutual checkmate; the winner is the player who moves all of his pieces backward into their starting positions first, having recaptured all pieces missing at the start (end) of the game. All other rules are identical to standard chess.
Rough Match
An illegal variant common in underground "street chess" circles, in which the losing player has both his thumbs broken, ensuring that he can never play chess again.
Texas Chess
A common variant of chess in which players can only move pieces by firing guns at them.
Yakimov's Nightmare
An uncommon scenario in which one player promotes all eight of his pawns to queens without capturing any of his opponent's pieces or losing any of his own. Named for its first and only recorded occurrence in Yakimov vs. Satan 1892.