Something Awful Endorses a Candidate

Chris Dodd On the Issues

Take a few minutes and discover Chris Dodd's positions on the issues and why we think they're important to America.

War in Iraq? Chris hates it!

"This war is way bogus," he told reporters earlier this week. Chris stands firmly against war anywhere, but especially in Iraq. "President Bush messed up big time with this one." We feel it's obvious that Chris is right.

Grandpas? Chris is for 'em!

Chris has never once proposed legislation criminalizing grandpas and voted no on HR 448, which would have made having or being a grandma illegal. Every American should understand the role grandpas and grandmas play in the economy. Without them we might never feel welcome in a Wal*Mart again.

Chris has more jowls than any of the other candidates other than Fred Thompson and Fred Thompson has never been seen using his jowls! Does Thompson even know how? Chris Dodd is a lifelong jowl owner and he uses and maintains his jowls with care and respect. That's the sort of man we need leading our country.

Space? Chris wants to check it out!

Supporters of NASA should be pleased to hear that Chris Dodd wants to have a look around space. "I think we should see what's up," he told a man in a boat. "Let's launch twice as many rockets and make them go farther." The man in the boat nodded. We can't help but agree with that man in a boat.

Football? Chris Dodd enjoys it with a slice of apple pie!

"God, I do love football," Chris Dodd replied to a plastic bag caught up in the wind that rustled inquisitively. "I can't even pick a team. I'm a fan of every team in America." Then Chris Dodd saw a squirrel and he chased it all the way to the top of a tree laughing and crying at the same time.

Healthcare? Chris has some great ideas!

"Americans should be healthier," Chris wrote down on a piece of paper in his hotel room. "Let's not eat so much and run around more." Then he wrote, "Better doctors" and he underlined it three times. Chris is very passionate about improving America's healthcare system. We think it's time for a change.

Racism? Chris is over it.

"It's time we as a nation move past racism," Chris said when he was breathing into a paper bag trying to calm down after seeing a ghost. "Racism is tearing us appaaaaaaaart!" He shouted at the sky and tore his shirt. Just then some birds flew out of a tree. Chris Dodd will move us forward.

Dogs? Chris believes they're smarter than we think.

It was a crisp October morning and Chris Dodd sat on the top step of his porch, huddled inside an overstuffed winter coat. It was early, just about the time the sun broke across the golden leaves of autumn, and his breath came in stinging white puffs. At this hour he was alone in the world, but for Caramel, his eight-year old golden lab. She sat on the step below and watched with him as the last geese flew south for warmer places. The wind picked up wet leaves in its fingers and scattered them where Chris had raked the day before. Chris felt like saying something, to no one's ear but winter, but no words came. He scratched Caramel on her neck. She seemed to sense the need for a connection and she looked up at him. For a moment, just one fleeting moment, Chris thought he saw sadness and sympathy in her brown eyes. Then he laughed to himself and stood with a groan. The coffee should be done brewing and he had to get an early start. Lots of people to see.

It's hard not to support Chris Dodd, but some people seem to be managing. The latest polls from Iowa do not show the Doddergy electrifying those in the know. 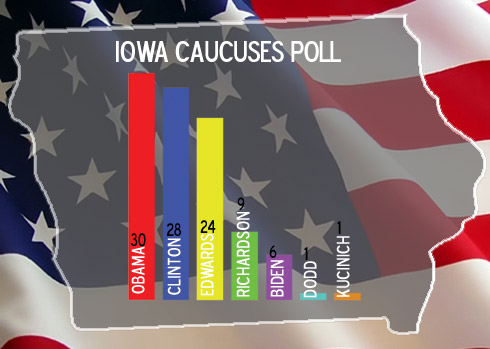 Do not despair, Doddites! With this endorsement from Something Awful we feel certain the silent majority of patriots for Dodd will be mobilized to action. A surprising upset in Iowa will lead to a tidalwave of Dodd support surging through the Democratic primary. Is it time for someone to start thinking about a running mate? Yes, and we just so happen to have a great suggestion for you, Chris.