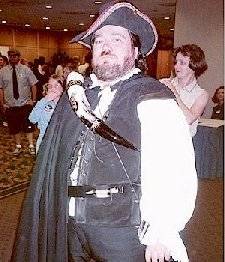 Baron Bloat has put out an order demanding that all taxes in his country are to be paid in greasy-ass pork rinds.Okay you slack-jawed inter-net butterslugs, get the fuck up off your shapeless flabby asses and pay attention because I've gone to a lot of trouble to write shit on this inter-site today and it's not for the good of my own goddamn health. While I'd much rather punch each and every one of you lard-dripping dorks in the throat, I've instead taken time out of my busy schedule to write this crap (something you lazy cretins won't appreciate because the only time you shifted your dough-filled ass in the past 3 weeks was to scratch at the pussy boils on your sweaty asscheeks). And while we're on the subject of the pitiful failures that pass as your wasted lives I don't want no more of your fucking idiot e mail letters either, so stop fucking emailing me or so help me god I'll find you on the FBI inter-net or something and fucking firebomb your filthy shitburg of a crackhouse home. Last year some FBI goons came to the house on the other side of the street where this family of about 380 Mexicans were staying and I keyed their truck while they were inside.

So Richard came to my house yesterday while I was outside at the back watching the broad with the big tits 2 doors down mowing her lawn. He was hammering on my front door for like 40 minutes before I noticed and then I thought he was trying to break in or some shit so I went upstairs to the window over the front door and dropped a trash bag full of broken bathroom tiles on his head. Anyway once he was conscious and after I'd made him scrub the blood off my doorstep he asked me if I could update his pointless nerd geek idiot web site about racing or hedges or tar or whatever the fuck it's supposed to be about, because he'd fallen over and dropped a solid wood toilet seat on his keyboard the day before. Don't ask me why the hell he was carrying a solid wood toilet seat around. At first I was gonna beat him around the head with a curtain rail and throw him out like the greasy-skulled moron simp he is, but then I remembered I had some photos and shit I could write about so I changed my mind and agreed to write on his fucktacular interweb-site. Then I beat him around the head with the curtain rail anyway because I'm an old vet and we're set in our ways. So here's my personal review of the Appleton City Summer Funland Gala which was held last week here in Appleton City, "home of the drooling retard". Actually "held" is probably the wrong word, "manhandled" is more appropriate. 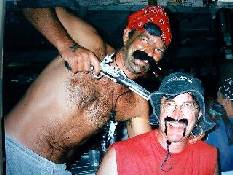 Two festive mutants do something irredeemably stupid. I shoved that gun down his throat and bashed the other one's face on a parking meter, knocking out 50 cents which I used to buy a Coke and smash it against his larynx.They have this hideous travesty of a festival in Appleton City every goddamn year. Inbred fools wearing carpets and bedsheets parade all over the fucking place and the streets are littered with bloated drunks and their greasy shitfaced kids. As far as I can tell the whole event is based on the premise of showcasing a whole bunch of freaks who should never be seen outdoors imitating various farmyard animals in the middle of the street, blocking traffic and increasing the city's National Drool Export by 900%. I first noticed something was wrong when I headed out to the liquor store at about 10am and found the street blocked by a goddamn truck loaded with a cargo of overweight redneck fucks throwing confetti around. This isn't such an unusual sight in Appleton City so I wasn't too bothered by it. I threw a brick through the cab window and the truck ran off the street and over the sidewalk and knocked over Norm Bradley's garden wall and then ploughed into the side of his house and stopped. Then all the fat rednecks fell off and went sprawling across Norm's flowerbeds and the driver fell out of the cab door and started bleeding all over Norm's herb garden. Fucking funniest shit ever. I read in the paper the next day that Norm had a heart attack and died in hospital the same afternoon. That bastard owed me 3 bottles of Jack Daniels and a pack of smokes and you can bet I'll be taking it out of whatever cash he left to his uglyass family of drunks and budding child molestors. 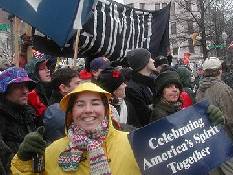 Gummy the Raincoat Raider leads a parade of hat-wearing retards down Oilsump Boulevard. The reason they all wear hats is because their deficient brains don't function at all below 40°C. Not that you'd be able to tell the difference anyway.When I turned onto Harper Avenue I began to regret not taking the car cause I'd have been able to run down the crowds of screaming imbeciles that formed the "parade", although it didn't look too different than the normal welfare line stretching down that street. When parading it's apparently really important to get in everyone else's way and under no circumstances move any faster than a one-legged asthmatic tortoise who's been shot in the head with a assault rifle. After being stuck behind a slowly shuffling mass of subhuman debris for about 65 miles, I was getting really pissed off so I starting yelling some shit about bombs and terrorists and invading chinese marching up Main Street. That soon got those fuckers moving. In fact, most of them ran away or hurled themselves through store windows like a bunch of brain damaged kids hopped up on goofball. It would have been even funnier if there really was a terrorist bomb, but I never saw one. Where the fuck are terrorists when you actually need them? All they do is blow up planes over the Atlantic and shoot off children's limbs for sport in Africa and Siberia and Naziland and all those places. While I was stationed in Da' Nang fighting for America and freedom so you worthless pusbags don't get eaten by Koreans, I met an Arab. I think it was Saddam Hussein. I punched that fucker right in his sandblasted jaw. Somebody said he was a Red Cross doctor, but I assumed they were lying too so I took a lunch tray and broke it over their communist skull. 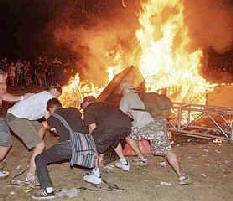 East Appleton High School students join in the celebrations.There was this one guy right outside the church who was selling watches and his head looked like a giant malformed vegetable about to tip and fall off his shoulders. I wanted a new watch because mine keeps fucking up ever since I dropped it in my Campbell's Cream of Mushroom Soup a couple of months back, and it always says "5:38" even when I can fucking tell it ISN'T 5:38. Anyway, Turnip-head tells me he wants $20 for a watch so I give him about $1.50 in dimes and quarters and while he's counting them I grab two watches off his table and run away. I lost them later on the way home from the bar I think, so that was a total fucking waste of money and time. Ron Brookes swears I threw them at the barman when he wouldn't get me a 19th double whisky but Ron Brookes is a drunken slob and his ex-wife said he used to wear her underwear to work, and I believe her because she said she gives good head and she didn't lie about that, let me tell you. Anyway when I finally got to the liquor store the zitfaced cretin clown behind the counter tried to shortchange me so I told him "YOU WANNA MESS WITH A VETERAN, BUDDY?!" and started breaking shit. He didn't actually get around to short-changing me but I could tell he was going to try it the moment I walked into the store just by looking at him. He won't try that shit on with me again, at least not with all those stitches they probably had to put in his eyes. 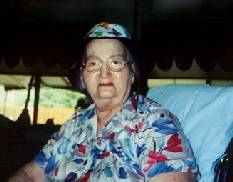 Granny Potato Head steals people's tablecloths to make her clothes. As you can tell, she is enjoying the fuck out of herself.I decided to cut back through the park which was a bad idea because it was overflowing with decrepit half-dead retirement home inmates wheezing and hacking and begging for someone to put them out of their misery. The worst part was the assembly of singing mummies on the bandstand. When I say "singing" what I really mean is "gasping and grating like a mineshaft packed with strangled polecats and broken blow-dryers". I fucking hate old farts who never shut the fuck up. I bought a hot dog from the stand in the park and it tasted like burned rubber so I threw it at some crazy old woman who was running around screaming that a filthy vagrant had carried off her grandson. It served the yammering old hag right for bringing her stinking brat outside in the first place. I think kids should be kept inside a soundproof government compound until they can be released as responsible human beings at the age of 40. Otherwise they just get the fuck in everyone's way all the time and make a shitload of fucking noise when I'm trying to watch "Law and Order". Speaking of which, I've seen a dramatic drop in the number of asshead little bastards messing around in my bushes after I started leaving twinkies laced with rat poison there. That and the fact that I laced the entire perimeter with barbed wire and shrapnel. 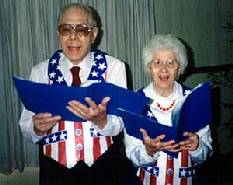 Let's sing along with the unquiet dead! I'll give you a box of chocolates if you kill me!I'm sure there were lots of features of the Appleton City Summer Funland Gala that I missed out on, like the Urine Home Brew drinking contest and the linoleum-chewing race or whatever the hell those cretins do for fun, and for that I am fucking grateful. I can safely say that the Summer Funland Gala is the cultural equivalent of being dunked in a steaming vat of raw sewage and medical waste for 24 hours, then being pulled out and beaten with a sack full of doorknobs for a week. I remember a few years back when Stan Liebewitz had to have his septic tank repaired and while it was open his nephew fell in and contracted typhoid fever. Me and Stan used to crack jokes about it all the time until his nephew had a sudden relapse and died, at which point only I continued to make jokes. It was still pretty fucking funny. When I had malaria in Nam I had a vision from God and he tried to sell me car brushes. By the way I originally sent this article to "Time" Magazine but they wouldn't publish it, so if you read their magazine stop buying it because they're turdmerchants. Now fuck off and don't fucking email me or I'll break all the shit in your house and piss on your sofa, you braindead bloated ugly zitfaced geek rat bastard humping slimeball gut-fucking son of a toothless pussbag bitch.