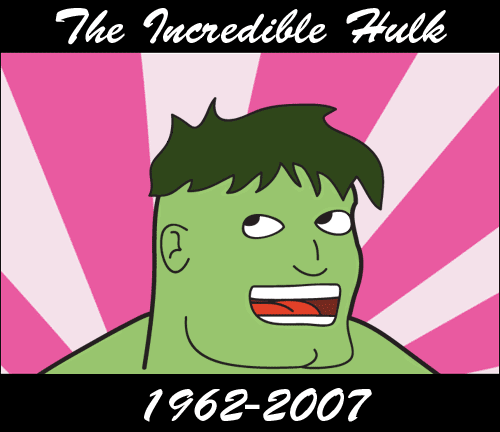 The Incredible Hulk is dead. After wearing a tie while in the form of Bruce Banner and becoming enraged by a traffic jam in the newest issue of his comic, our most green-hued superhero has departed this world for the big temper tantrum in the sky. Marvel has confirmed that no attempt will be made to resurrect the character. He is gone for good.

In memory of the Hulk we all grew up with, let us reflect upon some of his finest comic book appearances and hope that there are bad guys in heaven just waiting to be punched into outer space. 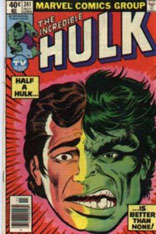 
We all know the beast that lives within Bruce Banner, the violent alter-ego that emerges in times of extreme duress. But what happens when he's only slightly upset?

Reed Richards: Thanks for stopping by, Bruce! I've been working on my pan-dimensional soft serve ice cream machine, and could really use your input on this chocolate/vanilla swirl cone. Here, give it a taste.
Bruce Banner: Thanks! I really like chocolate ice cream -
Hulk: BUT HATE VANILLA!
Reed Richards: Fascinating. Perhaps I should recalibrate the nanoinhibitor filtration device. Say, here comes my wife Sue!
Bruce Banner: Always a pleasure to see you, Sue -
Hulk: BUT HALF OF YOU INVISIBLE!
Sue: I'm so sorry about that, sometimes I stay in Invisible Woman mode without even realizing!
Bruce: It's quite alright -
Hulk: but shame make Hulk angry at Hulk. 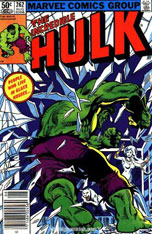 
The most beguiling enemy of modern man takes on the Hulk in an all-out battle for the ages! 24 action-packed pages of heroism in the face of tyranny!

Manager: You're supposed to pull the door to open it, you oaf!
Hulk: Puny handle said "PUSH"! What aisle for douche?
Manager: Uh, three.
Hulk: Hulk hate girlfriend so much right now. 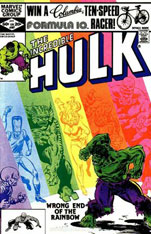 "Wrong End Of The Rainbow"
The Incredible Hulk #267


For the first time ever, Hulk takes on an enemy he cannot defeat. Will anything ever be the same again?

Hulk: Too many colors for Hulk to smash!
Rainbow Randy: Hulk, no! It's just a rainbow - you can't smash colors.
Hulk: What? What else can't Hulk smash? Love? Music? Chickens? Hulk's entire outlook on universe is smashed!