I Guess It All Depends On Your Point of View 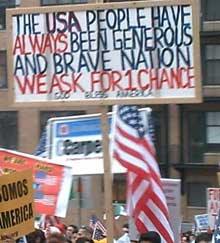 Won't somebody please give us a chance?! We're all superstars!!!On Tuesday May 1st demonstrations were held in various locations throughout the United States to rally support for illegal immigrant rights. Like last year most of these demonstrations were peaceful and without incident. Unfortunately at MacArthur Park near Downtown Los Angeles the scene turned to chaos as law enforcement attempted to disperse the crowd around 6PM.

Since the incident the Mayor of Los Angeles Antonio Villaraigosa ordered an investigation into whether or not the LAPD acted appropriately in using non-lethal force to pummel protesters and even members of the media. Police Chief William Bratton has expressed doubts that what he has seen of the incident on videotape was appropriate behavior by officers.

Never one to twiddle their thumbs while the snail-like bureaucracy of government plods along on a path to nowhere, our Something Awful investigative team of community college dropouts have been deployed to find out just what happened in MacArthur Park last Tuesday.

We talked to two witnesses who were on the front lines of the clash and got their stories about what really happened that day. Our first witness is LAPD officer Shane O'Connor, who describes a scene where self-defense was necessary to ensure the survival of himself and his partner, who tragically perished in the melee.

It was a beautiful Tuesday afternoon when my partner and I received a call about a code 404, a peaceful pro-immigration rally. We were delighted to hear that citizens and non-citizens alike were showing their American spirit and demonstrating peacefully for their rights so we decided to check it out.

On the way over we stopped by a Northgate Market and picked up a couple liters of soda, a few bags of chips, and a cake to bring to the protesters. It was a warmer than usual May Day and we thought that the protesters would be tired from all of their marching.

When we arrived we asked a Hispanic gentleman where the protest was. He told us he didn't talk to cops and understandably so! But nevertheless we explained to him that the LAPD has a friendly new image and offered the man a piece of cake. It was baked in the shape of a soccer ball and had a picture of a bee on it so we knew he would enjoy it. No matter what language you speak, a bee is a worldwide symbol of peace and friendship. He grimaced at me and screamed, "You just made your second mistake, pig!"

It was then that all hell broke loose. Hispanics, not that their ethnicity had anything to do with it mind you and I only mention it for completeness sake, descended from the trees in a guerilla attack. Before we knew it we were on the ground being beaten by waves of protesters chanting "La Raza! Death to America!" We heard cries of, "Don't kill them!" which temporarily relieved us, until it was followed by "No, make them suffer!" We knew we had to act fast.