Talk Crazy to Me

One shower and some contacts away from a super model.I met Lucy ten years ago at a small art show in Chicago. She was a good-looking woman; tall with long dark hair, big brown eyes, and a skinny body that still had some curves. She was shy and covered her mouth when she laughed even though her braces had been off for a few years. Lucy was the kind of girl you'd see playing the lead in one of those ugly-duckling teen movies. Only a pair grandma glasses between her and true beauty.

The art show was a terrible mixture of overwrought black and white photographs of tombstones and found art pieces. The beer was free and the spray-painted doll heads were plentiful, so Lucy had my full attention. I wasn't so much smitten by her as I was drunk and full of liquid confidence.

My pickup lines range famously among my friends from "do you have a phone?" to "nice boots" and they rarely receive anything other than an incredulous stare. Not from Lucy. She understood me. She was from Iowa and knew what it was like to be in the big city for the first time. She even appreciated my beery innuendos and my overloud running critique of the artwork that was slowly turning the whole gallery against me.

I talked with her for about an hour before she agreed to "go have a drink" with me. It was well-timed as I was about ten minutes away from being lynched by a mob in striped shirts brandishing their silver clocks and TVs repeatedly playing a man walking on a beach. I gave the gallery one last dirty look and left with Lucy on my arm.

We didn't go for a drink. We went straight to my studio apartment and had terrible sex on my futon. I won't humiliate myself by relating the details of that encounter, but suffice it to say we were both somewhat unresponsive. I put her frigidity down to the booze afflicting me and left it at that.

Over the coming weeks Lucy became something like a girlfriend. We didn't go out frequently, but we went out every other weekend, got drunk, and then came back to my place to fool around. I enjoyed spending time with her. She was smart and funny and, more importantly, she laughed at my terrible jokes. Things seemed to be going well enough.

There was a serious problem though. Every time we had sex it was terrible. She was all too happy to initiate sex, but once things got moving she stiffened up like a Neanderthal frozen in a block of ice. She would literally lie on her back with her arms at her sides and a clenched grimace on her face. Occasionally these tiny mousy peeps would emerge from her mouth. Every time we had sex I felt like I was a Viking raping some poor English girl I had torn from the arms of her mother. The novelty of that wore off fairly quickly.

As the relationship progressed I pressured Lucy into trying different things in the hope that they might awaken some sort of primal lust in her. I admit that it was selfish and I was probably a bit overbearing about it, but she seemed willing to go along with my ideas at least conceptually. It was the execution part that always caused the problem.

Every relationship has its share of unfulfilling sexual encounters, but each of mine with her was an embarrassment. I occasionally managed to complete the act by sheer force of hormones, but Lucy seemed about as likely to have an orgasm as a tree or a car. 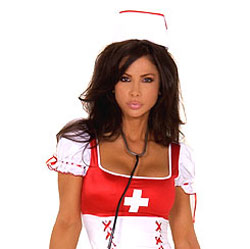 I AM A GRAIN AND YOU EAT THREE OF ME A DAY...Out of desperation I went the direction of fetish sex. Lucy was happy to participate, as usual, but once things got going she became the immovable object to my irresistible force.

Probably the most embarrassing of these attempts was a session of nurse and patient role play. She spoke like a third-grader reciting lines for a play about the food groups and then proceeded to give my groin a sponge bath that lasted for fifteen minutes. I finally had to remind her that the point of the role playing wasn't to actually clean my genitals. She then nodded and sort of squatted on top of me like she had to go to the bathroom. Thankfully, she did not, and I was just treated to another twenty minutes of emotionless sex.

As I was trying to coach her into becoming enthusiastic about sex, I was also trying to pull out some sort of trauma from her past. During conversations I asked her questions that danced around the subject like, "What's the weirdest thing that ever happened to you as a kid?" or "Do you think child molesters should be put to death?"

Guys generally do not want to know about a woman's dark molestation or rape background. We don't want to have to live up to a woman's creepy uncle or her abusive father. Those are big shoes to fill. But, in Lucy's case, it would have at least explained why she treated sex like she was enduring torture.

I figured maybe it would turn out to be something totally benign like she was raised as part of a Christian cult or she was in an accident and had to have her vagina rebuilt out of corpse cartilage. I was looking for one of those "whew" moments where I would be absolved of all blame for her frigidity and I could safely break up with her knowing it was not my fault.

I never found it. Her father was a dentist, her mother was a real estate agent, her brother was still in school and none of them touched her where the sun don't shine or locked her in a prayer room at night.

"That one is definitely off-limits," she said with certainty. "It's gross."

Lucy's dirty mouth turned out to be both the brief salvation of our relationship and its downfall. I thought our relationship was something worth saving and I realized that her frankness talking about sex was able to turn me on. One night I suggested that she try to bring that attitude over to the well-worn futon with her. My thinking was that even if she didn't move, at least she might be engaged on some level.

A few nights after I had brought up the subject we were having sex. Lucy's face was pinched into a grimace and her arms were at her side. As sweetly as I could, I reminded her of our conversation. She opened her eyes, looked at me, and in a voice that I can only describe as unearthly, she instruct me to, "Chew on those dogs."

I blinked and paused mid-thrust to stare at her.

I think I laughed a little and started in again.

"Reel it in," she urged with a little more passion, "reel it in and break a piece off for free."

Something was happening. Some major shift was underway in her behavior. She was saying things that made little or no sense, but she was also becoming involved. It was like her brain was playing a game of telephone with itself inside her skull. What started as a filthy line worthy of a Max Hardcore movie bounced around her neurons a few times and came out of her mouth as absolute madness.

As she grew more passionate the things she was saying became more and more removed from the action until she was speaking in a single stream-of-consciousness sentence. Making it even more bizarre, she would occasionally insert whole phrases I recognized, and even imitated the tone or inflection.

"Bagger get that inside the stirrup and roll it," she would say. 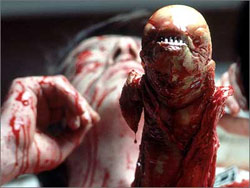 To quote Dickens by way of Lucy during what I can only assume was the height of her passion, "It was the best of times, it was the worst of times."

Pandora's oral box had been thrown open and out came a sometimes disturbing stream of verbal diarrhea. I would have broken up with her about the time she instructed me to, "kill me, please kill me," in the dying voice of one of the colonists from LV-426, but by God, the sex was amazing. She was really getting into it and I couldn't tell her to stop now that she finally seemed to be enjoying herself.

Our relationship lasted ten days. It's shallow, I know it is, but I tried to ignore her and I couldn't do it. Some of the things she said were disturbing, and they sort of haunt me still.

When we broke up, we agreed to remain friends, which lasted about another ten days. She started dating before me, which is good I guess, but I'm definitely not mature enough to hang around with a girl I was sleeping with two weeks earlier and the new guy she is banging. I met him once and I thought about asking him. I wanted to know if she was still good old Lucy with her insane mouth, but I didn't want to seem bitter.

In some strange way, I would like to think she's the same. I like to imagine that, as Lucy sang one night in the throes of passion, "Once you pop, you, you, you can't stop!"