Gaily Furnished is the Preamble of A.P. Brown 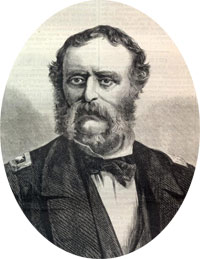 It is with a glad heart that I announce my anticipated return to the bosom of America. I must offer my thanks to all of my respected friends and associates, customers, hunters, trappers, and the exalted order of freemasons of the Mississippi Orient. Without your constant support I would not have bothered to find my way back from the far shores of the British Isles.

Concerning the business of fur trapping, its accessories, and its markets, I am not at all surprised to discover my colleague P.B. Fouke has profited greatly in his attempts to fill the cavity left by my departure. Four years is near a century in the volatile field of furs and a gentleman such as Fouke cannot be blamed for seizing upon the opportunity.

I am certain my loyal customers hardly noticed the drop in quality when his inferior traps and snares replaced mine on the shelves of the general stores of Missouri. No doubt they mistook his mean cleverness in following the trends of the Saskatchewan and Narragansett fur empires for some crude approximation of innovation within the industry.

Nor am I surprised to learn that J.F. Swanton has caught the scent of my departure and brought his blanket of child's traps and baits to set out upon the lane. In him a perceptive man can find an animal cunning wrapped in tweed and brass buttons.

I will take great pleasure in reminding the snake Swanton and his groomed mongoose Fouke that both can be crushed beneath the heel of the upright man. For it is I, Ashleigh Pollard Brown, whose name will echo in the ears of furriers, trappers, Indian guides and gentlefolk with a fondness for quality furs for generations to come.

Kind reader, I have traveled long and far from this Great Union of the Americas with the singular purpose of advancing the industry - nay, the science - of furs to dizzying heights heretofore unseen by mankind. I have visited the laboratories and workshops of London and extracted from the British the secrets of prosperity for all class of men associated with the business of furs.

In the coming weeks my catalog will astonish you with inventions you believed impossible and titillate you with even greater discoveries yet to be revealed. The names of J.F. Swanton and P.B. Fouke will be lost to the moldering centuries and you will hail the dawn of the age of A.P. Brown.

NOTHING BUT MISERY SOUTH OF THE UNION 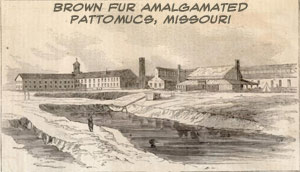 Home at last, soon to see a thorough modernization.Read well, for my adventures began with a tour of the Great Union of America. So complete was this tour and so vast the multitude of tales I could relate that I will not even attempt to communicate them herein. I will, instead, focus upon my journeys abroad, and upon my discovery of the one true future of the trade of furs.

Having departed the Western shores of our incomparable nation, I steamed upon my paddle ship d'Artagnan to the Isles of the Galapagos, where Sir Charles Darwin first penned that unnamable blasphemy that tore at the very gizzard of our civilization. There were no furs to be bought nor sold in this lost world. I found there naught but benighted jungle and the loathsome fauna that dwelt within its fronds.

Before departing that miserable spot I gave a righteous whoop and slew by saber ten dozen demoniac tortoises. They scarcely moved, so terrific was their fear at the sight of my charge, and in under an hour I had brought ruin to their whole town.

The quarrelsome sailors who had conveyed me to the shore of Galapagos were overcome with grief in the presence of the gory tableaux of their slain brethren. I laughed and bade them cover the isles in naptha so that I might set candle to it and be done. Sadly, our reserves had been expended a fortnight earlier upon the fatty hump of an enraged sea ox. I was therefore obligated to console myself by instructing my family sapper to decapitate a peculiarly ominous mound through the use of a powder charge.

Having overseen the demolition of the offending structure and any spirits residing within, we cast off for the more civilized land of England. A look at my admiralty charts brought an unhappy discovery; I found the body of Southern America interposed betwixt d'Artagnan and its destination. Without the time to circumnavigate this land, I had no recourse but to send riders across the continent with instructions to build an exact replica of my vessel on the opposing coast.

At great expense and effort d'Artagnan's forty six Austro-Hungarian cannon were brought ashore. With my men singing hymns of America and, dare I confess, a tear falling from each one of my eyes, the guns were turned upon the moored vessel. She did not go easily, as one would expect of a ship that beautiful, proud, as well as ribbed with three-inch bands of iron. At last, the nineteenth salvo sent her down, and I was able to wipe the tears from my eyes and silence the men in their fourth hour of singing.

The journey overland was largely uneventful, but trying of patience and taxing of body. Each day I was forced to work myself to the brink of unconsciousness, such was the feverish and unceasing application of the lash required to motivate the indolent debtors of my retinue serving as our pack animals.

One afternoon, owing to gross inattention, my third favorite cannon fell from its sled and crushed three of its bearers. Their jellied bones fouled its mechanism utterly, requiring many hours of work to restore. Another morning found an entire sled team missing, only to be rediscovered within the bellies of a pack of predatory cats I poached from the comfort of my litter. I made the creatures' pelts into a magnificent cloak and wore it each day to honor the fallen men.

At last, we reached the far shore of Southern America, and found the newly commissioned Athos stocked and ready to carry us to Britain.

HEAR THE TRUTH OF FUTURE INDUSTRY 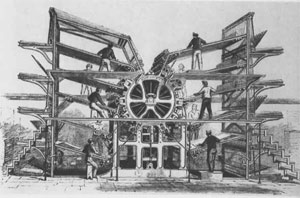 The Wollesby Buffalo Harrow, operated by the good lads of Wollesby.It was in Britain, gentle reader, that I at last unlocked the secrets of the trade of furs. I toured the white-washed laboratories of Wollesby United Furrier and conferred with Colonel Wollesby himself, a man with a mind equaled only by his hale constitution. I demonstrated for him the ways of the savage Indians recently tamed by our Western Armies and amused him with potted meats from the charnel yards of Chicago.

In return, Colonel Wollesby revealed to me the devices created by his own sons, as well as a fine selection of machines from the mainland. He even made available to me several of these devices for purchase and study, an offer I immediately accepted. I am now the sole owner of the Hessian Hare Dart, a trap so clever that it is capable of being laid in less than one minute and can kill a hare from a distance of three yards without any damage to the fur.

With great effort I also secured the one and only license in North America for the reproduction of a number of Wollesby products. I am proud to say that Brown will soon offer the Wollesby Reciprocating Eagle Saw, the Wollesby Coal-Fed Buffalo Harrow, and the always-popular Wollesby Pneumatic Beaver Scourge, which last year defeated the Spanish Beaver Comb in a competition on the Saint Lawrence Estuary, obliterating over 95 beavers in the process.

I have also gained great insight into the abstruse processes of industrial fur and pelt harvesting from the Manchester Fur Yards of H.H. Herring. Even the youngest and most malnourished among the urchins of Manchester are capable of easily operating the machines there, and the lads scarcely need to be trained nor paid.

These mass fur operations are the key to unlocking the untapped pool of manpower in the Americas at little expense to the clever entrepreneur. With the right investment of capital and ingenuity a factory using automatic techniques and child labor could conceivably shuck more than 9,000 badgers in a single hour.

It is this sort of efficiency and expertise in advanced techniques that I promise to bring to all future endeavors of Brown Fur Amalgamated. I have returned to my seat at the head of my family factory in Pattomucs and I intend to banish these charlatans from the business.

Brown Fur Amalgamated will bring a breath of fresh ideas into the stale air being exhaled by Mr. Fouke and Mr. Swanson. Together, fair customer, you and I will explore new and exciting avenues of profit. The future is ours!