From the "Yes, We Are Horrible Monsters and We Pray For Death" category, CNN.com has revealed a shocking and frightening story that may possibly SHOCK AND FRIGHTEN YOU:

Computer education culture discourages girls, survey says - The methods used to teach computer programming classes are turning off girls at both the high school and college level, a new report says. As a result, it says, women make up just 20 per cent of the high-tech workforce. 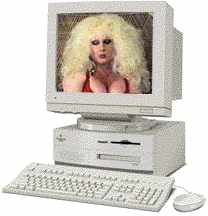 Of course a more appropriate title for this article would probably be "Computer education culture discourages people not interested in computer education", but I doubt anybody would click on that link, unless the promise of fabulous cash prizes and free Hawaiian vacations were mentioned somewhere in the title. You know, like the banner ads that run all over this site. The ones that I can only imagine are wildly successful beyond anybody's dreams because, come on, YOU COULD WIN CASH PRIZES FOR CLICKING ON AN AD BANNER! It's like money in the bank! I'm going to go and spend the twelve dollars I have in the "Old Man Lowtax Retirement Fund" right now, because those ad banners virtually ensure financial success. I'll be like the next Donald Trump or Ted Turner or Donald Pleasance. With a little bit of Abraham Lincoln and Rico Suave mixed in for good measure. And a dash of that hippie guy from "WKRP in Cincinnati" too. Bake at 450 for 30 minutes and stir. Serves 12 fully grown men.

All this discussion of cooking, however, leads perfectly back to the point I was trying to make before I was sidetracked by discussing cooking. Let me see if I understand this article correctly: women only make up 20% of the "high-tech workplace" (you know, the thing DeVry always babbles on and on about in their commercials while showing some nimrod holding a soldering iron and chunk of circuitboard) because they find it "tedious and dull"? Is there a problem here that I'm not aware of? I've been under the impression that programming classes, like English classes or history classes, have been developed to prepare people in that field of study. If you like English and enjoy works of literature written in that particular language, you will naturally find English courses interesting and want to continue studies in them. Same goes for computer programming: if you like programming computers, you will enjoy taking the courses. This doesn't have anything to do with gender, it has everything to do with the amount of people interested in computer programming. I haven't seen too many articles complaining that enough men aren't studying to become flight attendants or nurses. Why? Because men don't care enough to.

Pamela Haag, who headed the research and ironically has a last name which looks an awful lot like "Hag", is complaining that classes need to have their core curriculum changed so more women will suddenly realize that they do in fact love computer science. I don't know how she plans on doing this, maybe by asking teachers to explain how C++ ties in with the Tampon industry or whatever the hell women are interested in.

The report suggests girls could step in and fill the information technology job shortage if the educational establishment makes computer programming courses more interesting to girls.

So the Haag is now suggesting that teachers stop focusing on curriculum that will actually prepare students for a job in their field of study, and instead concentrate on crap that will make it "more interesting" to women? Does this make sense? Even more importantly, do we really NEED to be recruiting women into the software industry? I would guess that the field needs qualified people... not men or women, just people who are qualified. If you are able to sit through four plus years of foreign teachers from mythological ninth-world countries rambling about pointers and God only knows what, you are qualified. The courses and tests don't give a damn if you're a man, woman, or Gamefan employee, they just care about your scores and intelligence.

Let's continue Miss Haag's logic even further. I've noticed a distinct lack of women in the National Football League. This greatly bothers me, because... well, I'm not really sure why. It just bothers me in general, like that one episode of "Family Ties" where Alex came back from the big band concert and he had some white goo around his mouth (NOTE: This may or may not have ever happened). I demand the NFL change its recruiting practice to focus more on people who run slower, are generally less muscular, and fail to have penises between their legs. After all, we MUST have an equal split between sexes in every possible work environment or else something bad will happen, probably like when the Ghostbusters crossed the streams and all hell broke loose. Except instead of ghosts, we'll have rabid feminists running around. And instead of the Stay Puft Marshmellow man, we'll have... no, let's stick with the Stay Puft Marshmellow Man. That guy was the best.

I just don't understand what the problem is here. It's not like women are being denied the right to study computer science. The chance is right in front of them, and any woman who wants to take it has the freedom to take it, just like men. The people who are being discriminated against are the people who have no interest in computer science, whether it be a male or female. Why are we still at an age where we have to continue to make gender problems from things that are clearly non-issues? Why do we have to keep polarizing everything and view it as purely black and white? More importantly, why the hell do I care? Like always, I don't have an answer for any of these questions, but I do have an answer to last week's "Stump the Retard" quiz: "BeO, tungsten, aluminum nitride, pyrolytic graphite and molybdenum."

Shocking and thrilling news item! Yes, Something Awful once again proves that this site is your one-stop need for all forms of news and items which have been doctored up to resemble news articles but are actually subliminal messages to help spread my right-wing fundamentalist propaganda! We've got exclusive news about ION Storm's upcoming sequel to the smash-hit Deus Ex. Yes, the game EVERYBODY'S been waiting for...

"Throughout his search, he kept getting a whole bunch of mixed feedback; people want games that use clichéd 'real life' weapons, yet demand something original. People want games that reflect 'real life' scenarios, yet also ask for something fun and new. We couldn't figure out what was popular in gaming, but we did find out what was popular to gamers; Goatse.cx."

If you read it on a website, it must be true! Go read!

Imagine a huuuuuuge box with an innocuous mossy stone textured wall and an immense sea of nuclear slime stretched over the floor. Now imagine a batch of brownie-sized blocks of matter hovering over the slime in such a way that one can carefully leap from block to block for no good reason. Now imagine that in the middle of the sea of slime there is a perfectly rectangular patch of dry ground, in the middle of which is a teleporter that leads to a glaringly bright room with crushing walls. Now picture a patch on the wall that if shot by a player before they are crushed to pulp opens a door that leads to a room that is a deep, narrow shaft which pitches one down for about a mile if they miss the ledge. On the other side of the pit is a strangely constructed "room" with a lone Railgun and lava at its edges that slopes downward to an empty gutter, again glaringly fullbright and textured with the same innocuous graphic. A sniper nest with one machine gun and no ammo looms in one end of the room. In the middle is plunked a mega-health, and there is no way to get back up to the top. If you can envision those few things you have essentially reconstructed the level in your mind's eye, and actually looking at the map would be superfluous. This player kindly demonstrates the usual fate of anyone brave/stupid enough to try "Ninja3".

Fat for the whole family. Dig in, punks!