Over a period that stretched from November 2007 to February 2008, Albert Kleven abducted and murdered eleven young women and girls in California, Arizona, and Utah before he was finally apprehended by the Los Angeles County Sheriffs Department on February 23, 2008. Since the time of his incarceration, where he awaits execution by the state of California, Kleven had refused to speak with any members of the press. So last month it came as some surprise when Kleven chose Internet film journalist Ghost Dawg - né Mitchell Hayden, best known for his spirited campaign to have the movie Crash's Best Picture Academy Award revoked - for his first interview. 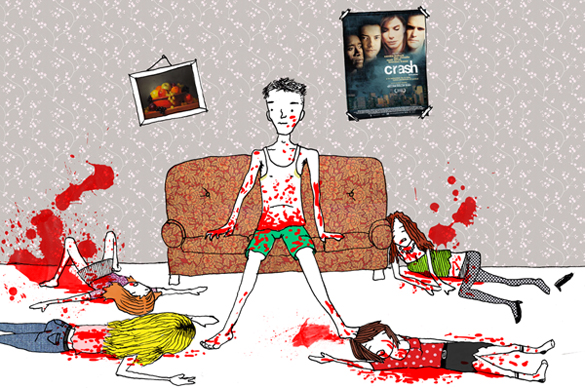 Ghost Dawg: In court you were very upfront about accepting your guilt. You seem to understand what you have done and feel some remorse. You clearly have perspective. So take me back. What are the antecedents of the Albert Kleven behavior that put you here?

Albert Kleven: I grew up in a wonderful home with two loving parents. We regularly attended church. My parents did not drink or smoke or gamble. There was no physical abuse in the home. I don't want anyone to try and blame what happened to me on poor parenting.

Dawg: When did the darkness begin to enter your life, then?

Kleven: As an undergraduate at UC Santa Barbara, I encountered, at a free screening sponsored by the campus's film society, the film Crash -

Dawg: The one by Paul Haggis, not the one by David Cronenberg -

Kleven: Right, correct. The Paul Haggis film. It blew my mind. I just thought it was amazing. And it introduced me to a whole new world of troublesome cinema. I believe the most damaging kind of movie is that which manages to be incredibly mainstream and overrated while somehow still enjoying the prestige and underdog status of a fringe film. The wedding of those two forces - as I know only too well - brings about behavior that is too terrible to describe.

Dawg: Walk me through that. What was going on in your mind at that time?

Kleven: First I just want to say - I'm not blaming Crash. I'm not saying it caused me to go out and do certain things. I take full responsibility for all the horrible things that I've done. The issue is how this kind of cinema contributed and helped mold and shape the monster I became. In the beginning, it fuels a certain kind of thought process. Because you are told that this is a good, serious movie by critics, that it is thought-provoking, that it is saying something relevant, that it is interesting, well, you begin to assume that must be a reflection of yourself. You must be interesting.

Dawg: All the while you are unaware the film is vapid horseshit ...

Kleven: Exactly. Once you become addicted to it, and I look at this as a kind of addiction, you look for more potent, presumably deeper material. You go back and see Million Dollar Baby, maybe American Beauty. You love Little Miss Sunshine because you think it is "edgy." You think you are edgy. It disgusts me to think about this now, but I recall having a conversation with a friend about Million Dollar Baby winning Best Picture, and he said that he thought The Incredibles was the best film of that year. I laughed in his face and said, "That's just a cartoon." There are nights when that exchange haunts me more than all the women and girls I killed.

Dawg: How long did you stay at that point, where you were simply an insufferable douche, before you actually hurt someone?

Kleven: Several years. I started my own film blog, and that kept me going for a while, but I was getting worse.

Dawg: Do you remember what pushed you over that edge?

Kleven: It's a very difficult thing to describe - the sensation of reaching that point where I knew I couldn't control it anymore. But it was probably after I gave Julie Taymor's Across the Universe a 10 out of 10 on my blog.

Dawg: After you committed your first murder, what was the emotional effect?

Kleven: There is no way to describe the brutal urge to do that, and once it had been satisfied, or spent, I became myself again. Basically, I was a decent person. I had good friends. I led a normal life, except for this one small but very potent and destructive thing - I loved Crash. Those of us who have been so influenced by mediocre film criticism in the media, particularly the newsstand magazines, are not some kind of inherent monsters. We are your sons and husbands. We grew up in regular families. As diligent as my parents were, and as good a Christian home as we had, there is no protection against the kinds of pedestrian influences that are loose in movie theaters. And home video. Did you know Crash has been number 1 on Netflix's Top 100 since the day it hit DVD?

Dawg: There have been several hundred reporters that wanted to talk to you, but you asked to speak with me because you had something you wanted to say. You feel that over-valued and trite films, and the door to them, Crash, is doing untold damage to other people.

Kleven: I'm no social scientist, and I don't pretend to know what John Q. Citizen thinks about this, but I've lived in prison for a few years now, and I've met a lot of men who were motivated to commit violence. Without exception, every one of them was a huge fan of Crash. The FBI's own study on serial homicide shows that the most common interest among serial killers is banal cinema.