Hey, Corporations! Get your Covid19 and BLM Ads out of the Cool Zone! 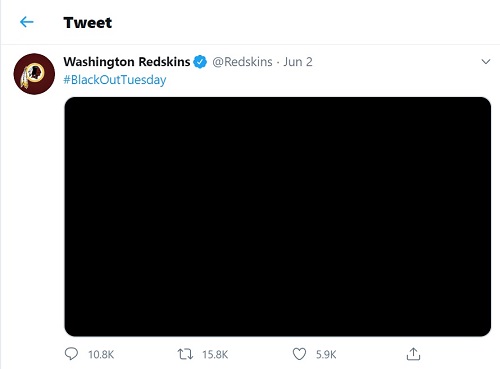 This week, I want to talk about corporations using global tragedy to "get their brand name out there" and otherwise profiteer off of human misery.

Now before I get all wound up on these garbage companies trying to stamp their soul-crushing brand on the emotionally raw haunches of the human race, I should point out that not all major companies are doing it totally and utterly wrong.

Take Uber: the company that keeps us from driving while drunk, and their subsidiary Uber Eats: the company that keeps us from driving while stoned. On June 4th, they announced they were suspending delivery fees for all black-owned businesses. So many struggling restaurant owners are depending solely on delivery services like Uber Eats. Their gesture gives small business entrepreneurs a better chance at staying afloat while simultaneously reminding white small business owners that, while they are no-doubt struggling as well (for which we are honestly all sad), they already got kind of a 400-year head start so let's not get too worked up over Uber knocking off ~$3 on an order.

I approve of this move, which reminds me of a joke: What is the difference between my privileged opinion and a black life? Answer: A black life matters.

Don't get me wrong, Uber Eats still charges all restaurant owners, including black ones, fees that could be as high as 30%. They just waived the "delivery" fee.

Therein lies the problem. No matter what gesture a corporation makes, no matter how much they pledge to donate to righteous causes, somewhere is a team of analysts making sure they get more than that value back. They get it back through some combination of increased political power or quid pro quo backscratching or exposure or just plain making sure that people don't burn your franchises to the ground because you won't let your employees wear a hat that basically says, "hey, police officers, could you please stop torturing black people to death?" 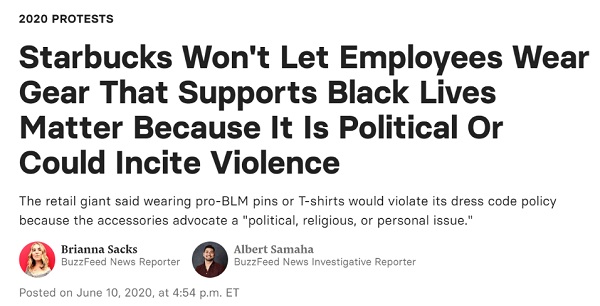 Sorry, Starbucks, I'm not going to let you get away with that. You don't get to put on your swimsuit and walk to the beach, you don't get to dip your toes into the waters of society to see if it's cooled off enough for you to dive fully into preventing employees from speaking out against racism. And, when the shark of pissed off black-supporting consumerism bites your toe off, you certainly don't get to walk away shouting, "I was on the shark's side all along, check out this shirt I made!"

(Also, "suggesting they instead wear a t-shirt reading 'keep it brewing' over an illustration of an Africa-branded coffee cup," which I can't even understand the point of enough to make fun of it.)

This "we are against protesting racial injustice... no, wait, now we're for it. And also we never were against it!" isn't the only scummy thing corporations are trying. They are working around the clock to try and take the movement for awareness of systemic injustice and decide that black people being executed in the streets is a GREAT time to slide in a few greasy "opportunities." 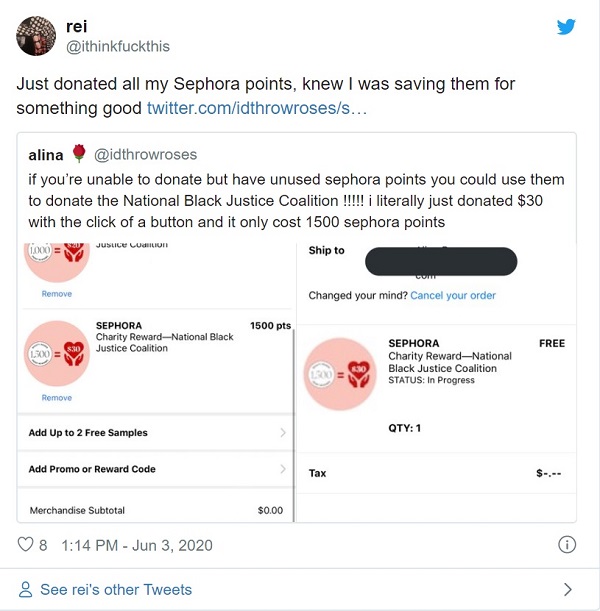 Sephora points holders: If you suddenly find yourself "unable" to donate, maybe look at your shopping cart and take out the $36 bottle of "DRUNK ELEPHANT D-Bronzi" Anti-Pollution Sunshine Drops" and the $45 can of "SOL DE JANEIRO Brazilian Bum Bum Cream," take that $81 and donate it to this person, Lucie Flynn. While Ms. Flynn was peacefully protesting in Oakland, a driver intentionally ran her over, breaking all of her ribs and incurring tens of thousands in medical bills beyond what insurance will pay.

But the worst, the absolute garbage-tier co-opting of BLM and Covid 19, the thing that makes me gag like I'm licking the bottom of a bus station garbage can, is the big banks trying to act like they are on the side of anything remotely resembling humans.

Many local bank chains and credit unions have actually done a great job working with customers for loan relief. But the big chains have been trying to get media exposure to portray the absolutely unbelievable farce that they give any more of a care about their customers than a python gives a care about the thing that is now making a goat-shaped bulge in its midsection.

Bank of America, whose shady financial practices were a big part of crashing the 2008 economy and were the subject of a Rolling Stone article entitled, "too Crooked to Fail," has decided to get in on the party. Yes, the same Bank of America executives who claimed $5.4 billions in losses to get a $1 billion tax refund in the same exact year they received $35 billion in bonuses have decided they are in the same corner as George Floyd, a guy who got executed over 20 measly dollars.

Their latest commercial is yet another saccharine attempt to lift up the spirits of a society who, by and large, doesn't seem quite ready to feel all happy and groovy.

Now, this originally came out before the protests started and was meant to be a "let's feel inspired that we all just got wrecked by a super virus" commercial. But they've been airing it throughout the protest coverage, so I'm just going to lump it into both categories, as some tone deaf B of A marketing consultant probably has as well. Let's take a look at some shots with captions: 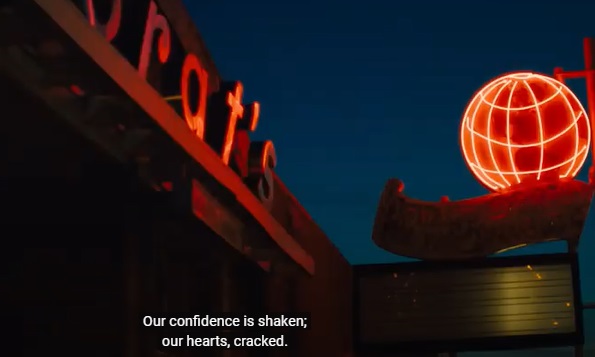 Yes, our hearts are cracked. But the notion that a global banking institution has a heart after they spend two decades fracturing society and the economy, perhaps irreparably, is the world's cruelest joke.

Speaking of which, Bank of America, now that you finally have my attention, will you address this spine-fracturing blow you've dealt to America? 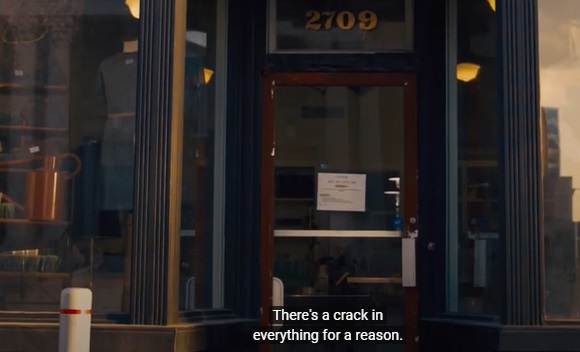 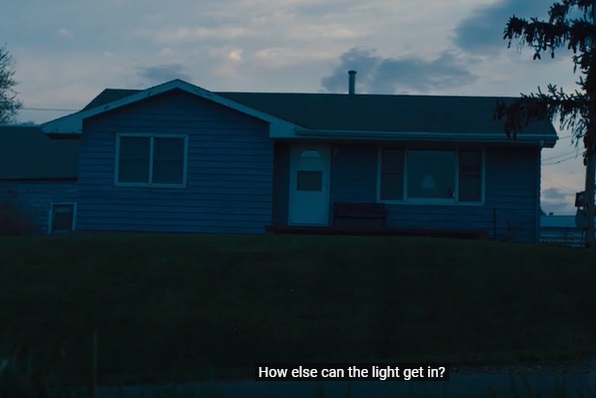 What? No, Bank of America, no! If I encounter someone who has been hit in the head repeatedly with a hammer, I don't ask them, "how else can the light get in?" I ask them, "how can I help your valuable brains stop hemorrhaging out?"

Okay, Bank of America, is there anything else you want to say? Perhaps some nonsensical platitude that sounds inspiring but means absolutely nothing in the context of the English language.

Bank of America has pledged to donate $1 billion over the next 4 years to Black Lives Matter causes. "Over the next 4 years." Don't get me wrong: That would be great, Bank of America, if tomorrow you gave meaningful money. Then the tomorrow after that you gave even more money. Then tomorrow after tomorrow after tomorrow you gave enough money to change communities and reverse the institutionalized injustice. But I recently heard something that makes me call into question this future donation, this yellow brick road paved with tomorrows.