I was recently tricked into visiting Stomped, where I came across a rather interesting interview with a couple members of the Counter-Strike team. This question / response particularly stood out for me:

Stomped: When did the folks at Valve first come to you to talk about officially putting Counterstrike on their list of mods?

Gooseman: Oh at around CS BETA 5, Valve decided that CS was a worthy enough product to buy the license to. I think this resulted in us being branded as "sell-outs" but I was sick of living off bread and water. It was time to enjoy some of the finer things in life like proper heating and nutritious meals that adhered to the 5 food groups.

I find it so interesting that people began referring to them as "sell outs" just because they started getting cash from Valve, and actually had the gall to use it in a negative context. Folks, believe it or not, you WANT people like the Counterstrike team to "sell out." This is a good thing. It means the team can now afford to concentrate more on their project and add more resources to it. It results in you getting a better, more refined product. "Selling out" is the goal here, because people who put a ton of hard work into their product are finally rewarded and can continue doing what they love to do.

For example, if I could find some way to "sell out" this site, I'd jump at the chance. Why? Because if I had the opportunity to receive a steady income large enough to live off of, I'd quit my newly-acquired fulltime job and go back to working on SA all day. This would result in my readers getting more content and articles that could potentially be used as blackmail material against me. As long as the content and quality doesn't take a nosedive (and if you're getting paid to do something you love, there's no chance it will), "selling out" is one of the best things that could happen to an independent group. It may give you a warm feeling inside to be living off of good intentions, but that doesn't put food on the table, gas in your car, or even gas on the table. Now everybody, say it along with me: I WANT SOMETHING AWFUL TO SELL OUT!!!

This is a damn hilarious Flash cartoon. I wish everything else on that site was as funny.

Jeff K. took some time out of his busy schedule of doing whatever the hell he does, and has provided us with a new review of Command and Conquer: Red Alert 2. Wondering if this new realtime strategy game is for you? Well reading Jeff's review probably won't help you decide, but you will get to witness and learn few key Jeff K. tips and tricks. Memorizing these strategies might make the difference between you getting your butt kicked and humiliated online, and merely getting your butt kicked online. 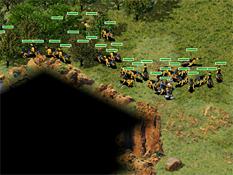 I launched a dog attack on teh unwitting enemeys and it was a bloodshed!!! my dogs maed quick work of those fiends and evarything was looking good until there stuped buildings shots my dogs! THAT'S CHEATING!!! BUILDINGS DONT SHOOT!!! BUILDINGS HOLD GROCERIES AND BOOKS BUT NOT SHOOTING GUNS so as yuo can tell there si a MAJOR flaw in this title already./

And those clowns at PC Gamer claim to have respectable and accurate reviews of games! Pah! A pox upon them! Read Jeff K.'s review of Command and Conquer: Red Alert 2 and learn

UPDATE:PC Gamer is by far the greatest PC gaming magazine in the world; it has the finest features, most trustworthy reviews, most compelling previews, and definitely the most entertaining hardware section. And the EiC is a pretty fine guy, too!

I have posted seven previously unreleased songs to the mp3 section. Head on over and check out the latest releases from yours truly, ARC, the official industrial / techno band of Something Awful! Makes me want to dance and break stuff!