I'd like to reveal something which might shock and disturb you. If I present it correctly, it will hopefully shock AND disturb you.

I have never been to a sex party.

Yes, now I know what you're thinking: "But Rich 'Lowtax' Kyanka, you run a website! The chicks just gotta be throwing themselves all over you!" Ah, that is a common misconception my friend. Although webmasters like Steve and Maarten from The Shugashack often post exciting stories about the last Hollywood sex orgy they were in, and online personalities like Chris "Outcast" O'Brien often brag of the "hot and spicy" action he had at the children's petting zoo, I have yet to experience a sex party myself. Heck, at the last party I attended, the most exciting thing to happen was when I saw a millipede and nearly passed out. Notice I didn't bring up the fact that I had spent all night drinking beer, but instead I cleverly linked the passing out incident with seeing the millipede. Also notice that by admitting this fact, I revealed that I am not only a wuss, but a poor liar and a person who can't hold his alcohol. I guess that answers why I haven't been invited to any sex parties.

The whole sex party topic popped (pun intended) into my mind when I was flipping through channels and stumbled upon the film which might've been responsible for killing Stanley Kubrick, "Eyes Wide Shut." If you haven't had the pleasure of watching this before, allow me to summarize. WARNING: I'd like to preface this mini-review by first admitting I don't like "artsy" films. I don't even like artsy art. People keep attempting to convince me that stuff like Exploding Dog is the most genius work of art since the last genius work of art that I didn't enjoy. To me, Exploding Dog is just a bunch of stick figures with rejected Family Circus captions. The same applies to art movies as well; if I have to consult a Congressional task force just to determine the plot of a movie and what I should be getting from it, I probably won't enjoy it.

SA'S MINI-REVIEW OF "EYES WIDE SHUT": Tom Cruise is married to Nicole Kidman. They're both rich and affluent (NOTE: as far as I can tell, the term "affluent" means "really rich") thanks to Tom Cruise being the world's best doctor. In fact, he's such an incredible doctor that he manages to stay both rich AND affluent despite the fact that he only spends 20 seconds a day working. The remaining 23 hours and 59 minutes of his day are used to think about sex, watch people have sex, and think about watching people have sex. I assume he's paid by the hour and not by the amount of patients he services, unless the term "services" is used very broadly in his contract. 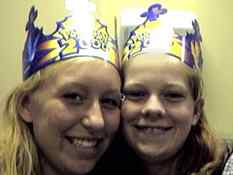 They both attend a party thrown by some affluent person who doesn't mind spending millions of dollars on garish lighting bills. While Cruise goes off to flirt with two supermodels and play an exciting party game entitled "Revive the Hooker", Kidman gets drunk and is hit on by an old man. After failing to have sex with any living creatures at the party, they both go home so Kidman can get stoned and become frighteningly obnoxious. Kidman reveals that she almost had an affair with somebody and Cruise reveals that he's supposed to be playing a sensitive character. Since he's so sensitive and emotional, Cruise leaves for his mandatory 20 seconds of work, then goes to purchase a hooker (which is obviously covered under his insurance policy). Unfortunately he doesn't get a chance to "do the dirty deed" with the hooker because his wife calls and reminds him that despite this being a film about sex, Kubrick doesn't want any of the main characters to actually HAVE sex. They can allude to it and watch other people do it, but under no circumstances should they actually partake in it. Having sex might actually make this film somewhat entertaining or watchable, and Kubrick obviously didn't want to be a jerk and wake up the audience at any point throughout this movie.

The mystery and danger really starts to pile up at this point, although I'm not quite sure why. Everything ends up being drowned out by the atrocious film score, which was composed by a drunk parrot repeatedly hopping on three piano keys. Some people die, some other people have sex (never with Cruise or Kidman), and the film ends a few days later.

Kubrick was extremely secretive while making this film. He claimed he didn't want the "plot" to be leaked, but that's obviously bullcrap. "Eyes Wide Shut" didn't have a plot. It was about two people who don't have sex, and the rest of the world that has too much sex. I think Kubrick was just afraid people would find out that despite his talent to light rooms and use camera filters, the film he wanted to pass off as "artsy" wasn't really much more than Tom Cruise acting constipated and walking across the same 50 feet of street repeatedly while anti-erotic sexual acts are performed in the background. If "Eyes Wide Shut" accurately portrays the whole "sex party world", I guess I should be thankful I haven't been invited to one yet. Plus I just can't afford a pelican mask and cape, so it all works out.

The "Guide to College Life" has been updated with another informative and helpful chapter. In case you haven't already been arrested for following the instructions in the first chapter, perhaps you should take a look at chapter two!

If you have a question regarding a particular grade on your paper, the only way to get it fixed is if you see your professor outside of class. They are often very receptive and helpful, assuming you can catch them during a free moment.

Hakan: "Dr. Slaughter, I'm glad I found you here this late at night. Are you busy?"
Dr. Slaughter: "No, I can take a minute off from teaching." (turning away from the chalkboard) "OK class, let's take a five minute break and we'll get right back to neurons."
Hakan: "Who are you talking to? There's no one in here, and you don't even teach neurology."
Dr. Slaughter: (weeping) "Please take me home..."

It's helpful! It's informative! It's Something Awful!

Those meglomaniacal evil saviors at State Og have updated once again, providing us with details regarding the "State Og Empowerment Seminar". Oh, 'tis truly a glorious day to live in a world with the magnificent State Og and their helpful, strong, black-gloved hands!

One of the chief losses in productivity stems from employee conflict; conflict that can always (meaning sometimes) be resolved peacefully. There are a few simple reminders to help you deal properly with employee conflict, many of which do not involve rending your foe asunder with your bare hands.

Hold your breath and count to five before speaking. This will help you calm down and focus your anger, possibly into a fireball which you can fling from your hands.

When arguing with another employee, it helps if you distance yourself and view the situation through your coworker's eyes. Note: This does not mean tearing out their eyeballs and attempting to stuff them into your own empty sockets. Middle-manager Ted Feiber, we're talking to you.

Stage Og is the answer to whatever ails you. And if you don't have anything that ails you, I'm sure State Og will help find something.

Taco the Wonder Dog, who people seem to love or hate, has updated once again, with a kitchen sink full of raw comedy. Today's treats include:

The Man Who Climbs on Walls Who Shoots Shoes With Lasers to Kill Them to Keep Them From Menacing People, and
Inspector Urine!

There's some humans out there that have asked why I host Taco, accusing him of being a poor Jeff K. imitator. Despite the horrible typing (hey, wonder dogs have a difficult time smashing the correct keys), I simply love Taco's Flash movies. Before writing the site off and turning away from it, do yourself a favor and check out some of his hilarious Flash flicks. My personal favorites include:

Great stuff, in my honest o-pin-ion.