So, there's this book called The Secret. No, not that book, this one: 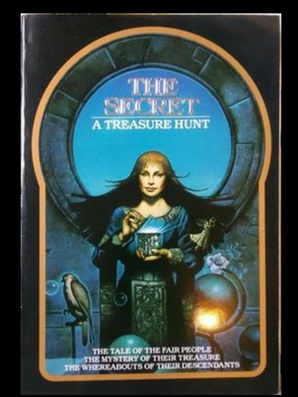 In 1982, a budding media entrepreneur published this book, which contained clues for 12 treasure hunts. Each hunt had a nonsensical verse and a painting, clues from which were supposed to lead hunters to dig up a cask and win a jewel worth about $1,000.

The book faded into obscurity when only one of the treasures was found. When THE INTERNET happened, the hunts had a renaissance as people could team up to solve the absurdly difficult puzzles (one puzzle clue required the reader to know about an obscure letter written in 1774 referencing two ancient Greek locations). In 2004, another of the puzzles were solved, which created a lot of buzz.

I first found out about it from a thread on the Something Awful forums (did you know we have a forums? We have a forums). I poked around attempting to solve the puzzle with other goons, gave up, and the whole thing kind of died down.

Expedition Unknown is a cool show on the Discovery Channel. Host Josh Gates looks into classic conspiracy theories, cryptozoology legends, and the people who defend them. A lot of their audience is smart people who like watching Gates fail, week after week, to prove anything weird happens, ever. But a lot more of the audience is the kind of people who believe in Ancient Alien Bigfoots.

On January 17, 2018, they aired an episode about The Secret treasure hunt. This caused thousands of people to flood the messageboards devoted to solving The Secret's puzzles. Some of these people were smart critical thinkers, but most of them were... just read these: 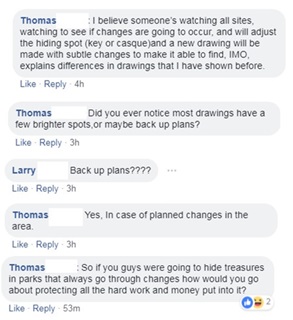 (tl;dr: This person thinks that, 35 years after this out-of-print book flopped, someone is still watching all 12 sites just in case construction or something else disturbs the prize location, in which case they will rebury the prize and make a brand new painting with subtle changes reflecting this move) 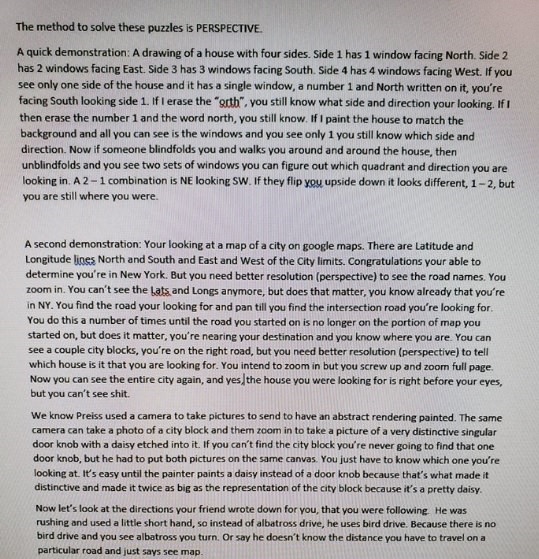 (tl;dr: the paintings contain symbolic directions to find the prize, which we all already knew) 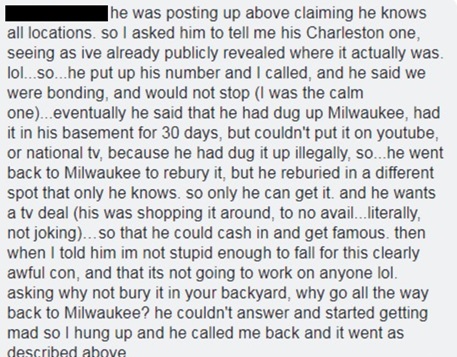 (tl;dr: One hunter's foolproof plan for fame and fortune is stalled out due to the chance of them receiving a small fine for digging in a park) 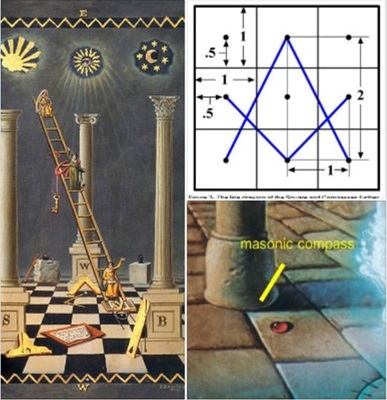 (tl;dr: A hunter decides the chance that they just missed a few small details when going over one of the solved puzzles is not as likely as the chance that the creator of the hunt flew out to Chicago and buried a second prize right where a team was searching)

I watched these posts with all the joy of staring at a trainwreck from a safe distance. Occasionally I would post long, rambling "solves" that led to a ridiculous "dig spot": In Antarctica, on Mars, etc.

A longtime fan of the hunts decided to make a new version, and went about it in spectacular fashion: He commissioned the son of the original artist for a new painting, contacted the sculptor of the buried prize boxes for the original prototype, and assembled a bounty of gems and silver worth thousands of dollars.

I was excited. I made a bad song about the new hunt and posted it. My enthusiasm led to him asking me to moderate the Facebook page that served as the main site for the hunt. I would have a front-row seat to the madness. I fainted with anticipation (it's a thing that happens. I'm normal). At first it was glorious:

(Note: This person would later have a complete meltdown, claiming to have contacted the Louisville sheriff, and an attorney. They were never heard from after this, except for one more post...) 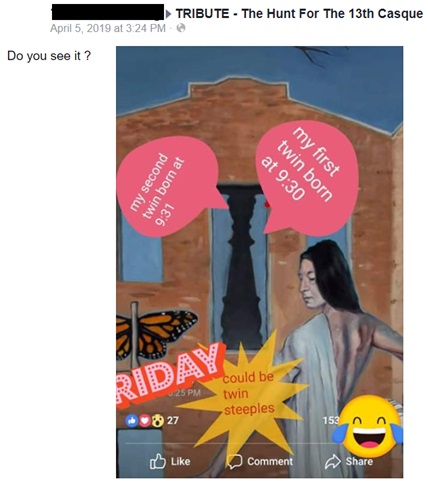 But, as the hunt wore on, a series of events happened that really humanized the hunters in my eyes. First, a community began to develop: 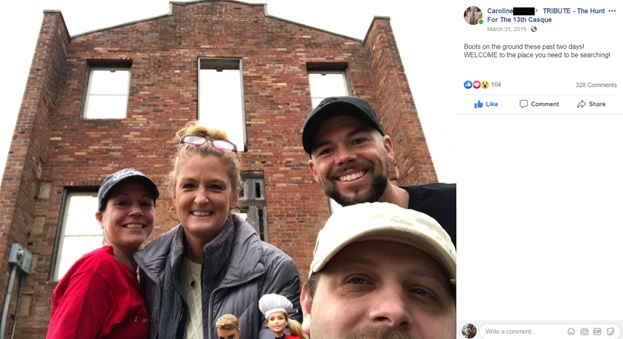 These people, strangers to each other before the hunt, came together from three separate corners of the country to hunt in the town where it is widely believed the treasure is buried. No one even serial-killed each other!

I even stopped by the town on a road trip and met up with a Goon from Detroit and a local Goon. They were super nice.

Another eye-opening thing that happened was, because of my role as moderator, I began having many private chats with a lot of the people I thought had particularly "crazy" theories (except the woman who had a meltdown, I wasn't going anywhere near that). It turns out, all of these people were normal, many of them were really cool and are now my friends. They just liked using their imagination to make up wild, complicated solves.

Realizing there were so many connections being made over this hunt from real, not-crazy people opened my eyes to something else: A surprising number of people were using these hunts to work out some really painful stuff.

Please note: I obtained permission from those two people to share these posts, here.

The realization that someone who just put a loved one in the ground was working through it by trying to pull a treasure out of the ground was so poetic it made me physically ache.

That opened my eyes to something else: I am a horrible monster.

For all I knew, the more fantastical "solutions" I had been jeering started out rational but became clouded with grief. Instead of those ridiculous posts being products of mental illness, there was a good chance that some actually were the output of emotional trauma (not that laughing at mental illness was any less despicable).

This led me down the path that is oft-trod by writers of comedy and mirth: Painful self-introspection. I realized something was amiss: It really isn't like me to celebrate the pain or mental illness of others. I like to think I'm a decent person: I donate, I volunteer, I wait until my kids have gone to bed to get stumbling drunk, etc.

So, why then was it such a fixture of my life to stare into the abyss that is the emotionally/mentally distressed trying to solve impossibly cryptic treasure hunts? What fulfillment could I possibly gain from it that I wasn't already getting from my burgeoning career, loving family, and ability to seamlessly weave humblebrags into my articles?

Then I realized why, and it floored me: Maybe I'm a bit emotionally and mentally distressed.

I'm well into my middle age, and my ever-present existential crisis that started when I was a young child has yet to stop. You know the way people are feeling now about the growing pandemic: Confused, upset, alienated, uncertain of the future? That's how I've felt about as often as I feel hungry. The more pieces of life we get, the more confusing it all becomes. I guess watching other people confront a baffling treasure hunt and react by appearing utterly nusto makes me feel like I'm not alone in my existential despair. It mirrors how the more I look at the nature of life, the more insane I feel. It gives me much-needed relief.

I'm doing it for myself.

Evan "Drunk Nerds" Hoovler has a new book, Teaching with Comedy, published by Kaplan. He and two other goons co-own the fantasy football comedy conglomerate, Football Absurdity. He has a weekly column on SomethingAwful.com, but you already knew that.