The Dark Side of Candy 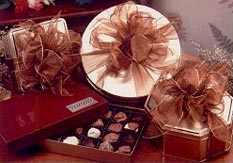 Down this path lies pain and suffering.Candy has plagued man since the beginning of time. Raised up on the sugary foundations of chocolate pops, gum drop dinosaurs, and crunchy toffee hats, we are caught as children in its unrelenting iron grip. More insidious than nicotine and more addictive than heroin, candy has enslaved generation after generation. Adults fight to break free of the addiction by eating things like onions and cow heads, but deep inside and every day they crave the base satisfaction of a sugar high. They gobble down their plates of oatmeal and mustard waiting to sneak away from the dinner table and top the meal off with a caramel bee box. Behind closed doors many adults will slouch on the floor, shirtless and bloated, covered with spilled chocolate sauce and melted ice cream balls, groaning at their own inability to lift themselves out of a sticky pool of butterscotch fudge.

I do not speak from a moral high ground on this issue, not from the superiority of immunity to candy's dark vice, I too have succumbed in the past to its sweet embrace and must fight daily to resist its siren's song. I was a gummy adherent, gobbling gelatinous animal shaped confections like they were going out of style. M & M's were great, Snickers too, so many various delights to be had. I had lost touch with reality. I wasn't talking to my friends and loved ones anymore. I was holed up in the basement of an abandoned sock factory, surrounded by candy wrappers, wallowing in my own filth and self loathing. When my savings ran out I turned to anything I could for my next fix. I took handouts from those kids selling candy bars door to door, I begged for after-dinner mints outside restaurants, I even snuck into a Ponderosa and filled my pockets with the fudge topping for the ice cream. 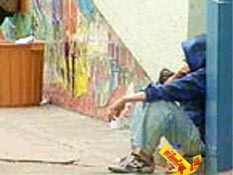 A candy addiction will ruin your life, leaving you peniless and on the street, with no friend but the Mr. Goodbar dealer on the corner.Finally my friends intervened. I had reached absolute bottom like some failed rock star in a VH1 Behind the Music rockumentary. When they found me I was incoherent, sucking down expired sweet & sour sauce packets I had rummaged from the dumpster next to a Chinese restaurant. Rich lured me into a van with a king-size Nestle Crunch bar, then Fragmaster put a burlap sack over my head and closed the van door. They drove me out into the country to an abandoned farmhouse, where they locked me in a room during my painful weeks of withdrawal. It was hellish. I craved candy, every bone in my body screamed for candy. It was as if the rungs on the ladder of my DNA had been replaced with Mars bars.

It ended though, and I returned to a normal life, able to walk by racks of Cherry Clans and Chick o' Sticks without grabbing handfuls. Then a little over a week ago I was enjoying a piece of toast and some canned (not candied) yams, when I read something horrible on MSNBC.

To capitalize on the release of the Harry Potter movie, some merchandising mavens have developed "Bertie Bott's Every Flavor Beans". A simple jelly bean is insidious enough, but these are far worse. These are modeled to simulate the flavors of almost everything imaginable, flavors that are normally not associated with candy and therefore pose a risk to the savory-only lives of adults.

Along with chocolate pudding, strawberry jam and Black Forest cake, you will also find sardine-, horseradish-, black pepper- and booger-flavored beans. And Cap Candy has announced plans to release dirt-, vomit- and mustard-flavored beans this year.

I know what you're thinking; "how could people possibly be tempted into buying these jellybeans with flavors like vomit and dirt?" The answer is even more terrible than you might have imagined. By giving these jellybeans such unconventional - but everyday - flavors, it will allows the makers to bypass the usual adult reluctance to eat candy. Imagine if you will, Joe Everyman, after a night of hard drinking comes home and pukes up the contents of his stomach. Naturally, this leaves him feeling a bit empty, but with the taste of vomit clinging to his teeth he wouldn't dare try to enjoy a normal meal. Instead he finds a bowl full of vomit flavored jellybeans and his problems are seemingly solved. But his problems are really just beginning. From then on he is an addict, pulled into the painful web of lies and misdeeds that candy manufacturers pitilessly weave for the unsuspecting.

This is just a drop in the proverbial bucket of "stealth candy", the true menace of the 21st century. There are a number of such confections being marketed to the most vulnerable and easily manipulated demographic of all; adults. This is especially frightening because I technically belong to this demographic. With some contacts within the industry I managed to turn up a complete list of the flavors that will be released in the "Bertie Bott's Every Flavor Beans" line of candy, along with several other sinister delicacies from other manufacturers.

Actually, I'll stop it there. There are more flavors than I could possibly list here in my lifetime. Other candy manufacturers want in on the action as well, here are some of their entries into this devious new market.

Probably most disturbing of all are the candy bars soon to be released by the makers of Watchamacallit, which are said to taste like the concentration camp of Treblinka. Who that flavor would appeal to is beyond me, but the very fact that they think there is a market for it is disturbing enough.

Join me friends, boycott these products and avoid the pitfalls of a life addicted to candies. It's easy to tell yourself that you know when to stop, that you're just eating candy for fun, but even a tic tac can be a gateway to chocolate covered cherries. Don't get started.