And Now a Word From Our Sponsor... Me!

As you might've noticed, we're selling ad space on Something Awful. Since I refuse to join another lying, cheating, good-for-nothing ad network, I'm doing all the ad sales personally. When I first implemented the idea a couple days ago, I figured I would sell towards businesses and Internet companies, since they have all that money they made from shocking the monkey all day. However, I recently realized that this was a bad idea, as companies aren't interested in advertising anything anywhere, much less a site dedicated to pointing out how stupid companies are. I have changed my advertising strategy with this thought in mind.

From now on, one banner ad on SA for one month will cost $45. I have lowered the cost so virtually anybody can now buy a banner ad on this site if they would like to support us. For $45, we'll put your ad into rotation for 30 days and link to wherever you'd like. There are no guaranteed number of times that your ad will be served; if more people take advantage of this service, then your ad will be shown less. However, we'll keep your ad in rotation for 30 days and you'll get traffic and the joy of knowing you helped support a site run by a bitter little troll-like man. If you'd like to see your snazzy message on every page of SA, click here to get the advertising details.

The SA Christmas Catalogue: Day One

Are you ready for the upcoming Christmas holiday? We here at Something Awful are! In fact, we're so ready for the holidays that we're currently preparing our site for the Christmas season... of the year 2002! As you've noticed, retailers are selling Christmas items earlier and earlier in the year, hoping to beat all the other stores to the punch. As a result, we've taken the ultimate competitive step and started shipping out our catalogue over 13 months in advance! Try to beat that, Radio Shack, you cutthroat bastard devils! Over the next month or so, we'll be showing brief advertisements for the hottest presents and gifts for the upcoming 2002 Christmas season, hoping that you too will be infected with the holiday fever, to which the only cure is purchasing quality Something Awful catalogue goods! Well that and maybe a daily barrage of penicillin.

Pacemakers of the past were bulky, expensive, "un-hip" items that were only used to keep old people from inevitably dying (which they did anyway). Nobody ever proudly proclaimed themselves as pacemaker user, choosing instead to hide their secret shame while avoiding the microwave section of K-Marts across America. Well guess what, folks? That's all about to change with the new and radical PaceMastah 3000! 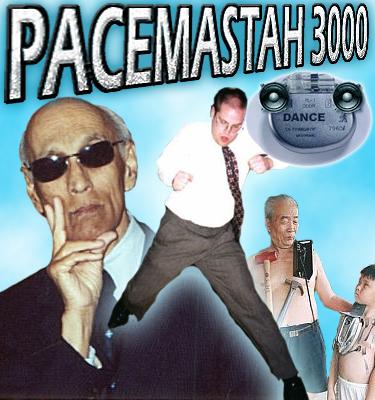 The PaceMastah 3000 is a revolutionary new product that's sweeping the country by storm, enabling men, women, and children of all ages the ability to get down with their collective bad selves while maintaining a steady heartbeat! The pacemaker is no longer just a vital tool for the elderly; it's a hot hip-hop happenin' gadget that lets the rest of the world know how "boss" and "awesome" you truly are! The PaceMastah 3000 will have your kids saying, "mom, thanks for the left ventriCOOL present" in no time! Imagine the look on your son's face as he is wheeled out from the operating room knowing he's got the most kick-ass gadget installed next to his digestive system! Look out ladies, here comes Mr. Heartbreaker!

So what exactly is the PaceMastah 3000? Let us explain. The pacemaker is known as one of the most important medical devices in history, allowing hundreds of thousands of people to experience the tubular sensation of a heart that beats regularly. Although it has nothing to do with the medical industry, the personal stereo system is a light and easy way to listen to your favorite tunes at work or on the move. We've combined the best of these both worlds to produce the PaceMastah 3000, the first pacemaker that plays your favorite mp3s while you work, play, or sleep! The standard PaceMastah 3000 comes with 2-way, 45 watts x 2 speakers that can blast out the hottest chart-topping hits, all from the safe comfort of your chest cavity! Are you looking for the ultimate spine-thumping bass? Well your search ends here, as the PaceMastah 3000 is guaranteed to rattle every bone in your body as well as all major internal organs! Be the life of the party by blaring out the most popular songs... without any of the bothersome and obnoxious cords and cables! 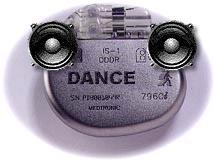 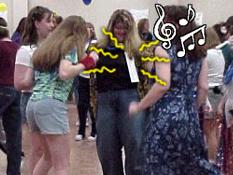 The Mobile DJ PaceMastah 3000 was created with the dance machine in mind! Spice up that boring rave by blasting out the trendiest new gabber core techstep goa trace fusion acid 303 darkhouse horrorcore trickstep ambient techno tunes! In-track fades will automatically fade in and out between breaks, leaving your hands free to wave about and perhaps even feel up that "fly honey" that's been looking at you! If you're really hardcore about your music, our built-in DJ tools let you simulate record scratching by simply rubbing your hand over certain parts of your chest. Now you're probably wondering how on Earth you could be able to dance to the rhythm while DJing a party in your stomach. Well once again, the PaceMastah 3000 allows you the freedom to do all this and much more! Your heartbeat will automatically sync to the music's beat, making it easier for you to twist and groove to those killer beats! Far out, man! 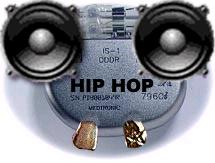 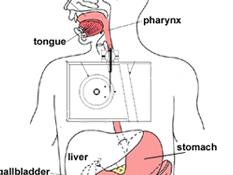 The Hip-Hop PaceMastah 3000 comes with 3-way, 100 watts x 2 speakers that warmly handle all those tight subs and thumps from your kickin' DJ EZ Kool Kash Money tracks. In addition, there are two gold teeth that have been surgically welded to the unit, letting the rest of the world know you're "street tough" and "not a G to fuck with, aight?" What's a better way to say "whas up, niggah?" than with the Hip Hop PaceMastah 3000, the number one chest implant of the hood? Head on down to your local back street clinic and we'll shove one of these fuckers into you before you can say "yo holmes, step off my grille!" We'll even personally administer your malt liquor drip!

The Hip Hop PaceMastah 3000, due to its increased power requirements, requires that we install a hydroelectric generator inside your esophagus to create sufficient electricity. Our trained surgeons and firemen might have to strategically move or take out various "non essential" parts of you to make space for this hydroelectric generator, but as they say in the hood, "hook a brotha' up, yo!"

Model 13-A: The Prank Pacemaker

So you want the ultimate gag gift, the perfect way to say, "ha ha, gotcha, sucker!" to one of your closest buddies. However, you've already done all the standard practical jokes. You've tried the old "spring snake in the can of nuts trick," "abc gum gag," and "wife buried under the basement prank." It's time for you to move on to the ultimate practical joke: the Prank Pacemaker! We'll call up your friend, pretending to be medical experts and claiming that he needs to come to our office right away because he has anthrax or AIDS or Exploding Man Syndrome. Once he arrives we'll knock him unconscious, implant the Prank Pacemaker, and revive him. Our specially trained nurses will then claim that we were mistaken and had accidentally confused him with Bob Hope. Your friend will come back home, go to work, and do all the inane things he usually does without the knowledge that he has one of the most utterly hilarious lumps of metal implanted inside him! 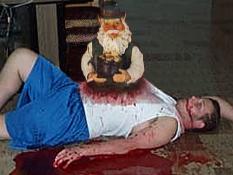 Cue the big day: you and your friend are at your boss' party. It's really important to your friend that he makes a good impression because his raise will depend on impressing his boss. As he approaches the big man and starts engaging in conversation, you quickly press the remote control Prank Pacemaker button, causing his hilarious health assistant to spring to life shouting "hey everybody! Help me! Help me! I'm a magic Leprechaun and I'm trapped in this guy's chest! He ate me when I was trying to grant him his third wish! The first person to free me gets his third wish! Just let me out!" Imagine the entertainment value of watching countless people tear into your friend's stomach, ripping him apart in search of the elusive Leprechaun! Think of the looks plastered across their faces when they realize there was no magic Leprechaun, just a Prank Pacemaker that begins to shout, "ha ha! Tricked you, suckers!" before exploding into a million deadly pieces of burning shrapnel! It'll be the greatest party ever!

Wow! These truly are going to be the hottest gifts for Christmas 2002! Hurry up and order yours now! Before you die!