These are a few of Zack's favorite things.

Thanks for the Support!

A number of people have e-mailed me offering support for our crusade against Scientology. While I appreciate the sentiment I must comment that I cannot accept such support considering our goal has shifted from revealing Scientology as a dangerous and moronic cult, to celebrating the wonderful teachings of my personal savior L. Ron Hubbard. We're not going to shove this down your throat, so I won't be talking much about Scientology today, but I must thank all of the people for their thoughtful renderings of the late, great, L. Ron Hubbard. Especially those submitted by our loyal readers and those stopping by from Fark.

Just a sneak peak at what we're working on in the future, here's a screen capture of our soon-to-be released educational film on Scientology.

We didn't actually make it, we're just remastering and digitizing an old film reel from the 1950's, but I look at it as a step forward in my relationship with my spectral mentor L. Ron Hubbard.

Readers of Something Awful are probably by now accustomed to us ranting about things that we absolutely hate, poking fun at the idiocy of gaming, the Interweb, and society in general. Today, however, I'm going to turn the tables like a scratch artist and talk about some things that I have found I liked recently. This is really just a not-so-clever way of inserting a brief review of a CD one of Rich's friends sent me that it turned out I liked a surprising amount. My mom always said I lacked things like "tact", and "good business sense", but mostly she said I stunk to high heaven and needed to take a shower.

Since then my life has been consumed with murdering people online in the most enjoyable multiplayer experience since my friends and I networked Duke 3D. I've actually gotten quite good, considering I normally possess the motorskills of a mildly retarded drunkard, and if you see someone named "elpintogrande" stabbing you repeatedly, then yes, that's me. If you're a fan of first person shooters, World War II, or like me, both, then I highly recommend you download the recently released new version of the multiplayer test. It is seriously deficient in the Nazi sexpots clad in leather department, but I'm sure they'll more than make up for it when the full game is released.

The boys at Gray Matter who are developing the game somehow manage to tolerate Rich and offered to include him in the final release of the game as a Nazi or a Nazi stripper or a Nazi mummy stripper or something. All he had to do was send in three headshots to them and they'd make his ugly mug into a texture for one of the Nazi sex women. Well, R-Lo being R-Lo, he completely forgot about this and was removed from the list of "men who look enough like women to stick their face on a big breasted model". Naturally this irritated me immensely because I was looking forward to shooting Rich in the face with a Luger about five thousand times.

Despite all this, and despite the fact that they are not even fucking paying me to shill their game like they should because I am obviously a weak-kneed opinion whore, I highly recommend this game. It hasn't been released and may turn out to be buggy crapware, but my god is the Multiplayer Test fun. 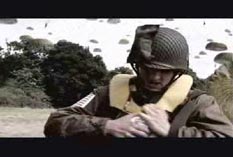 Most parts of this show actually have people shooting guns!I am a huge fan of World War II. Not in the "that was the coolest war ever" sense, more of "that was the closest mankind has come to date to actually destroying itself" sense. Okay, I can't lie, it really was the coolest war ever. You had definite good guys, you had definite bad guys. You had underdogs like the British, anti-heroes like Erwin Rommel who were good people fighting for the wrong reasons, and above all you had this extremely evil super power that was willing to do the most terrible things that could be imagined. I guess that part wasn't really at all cool, thinking about all the Jewish friends I don't have because of the holocaust.

Saving Private Ryan wasn't the best war movie ever made. While it conveyed the visceral horror of war and the sense of losing friends to a bloody conflict, it lacked the sort of war poetry of other, superior films. Steven Spielberg and Tom Hanks have gone a good way in filling in this void by producing the new HBO series "Band of Brothers" which follows the exploits of "Easy Company" of the 101st (NOT 82nd!) Airborne Division. The show is filled with great characters (because they're real), great performances, and really damn impressive action. Some of the episodes of the show have been a bit clichéd and uneven, but overall I would have to say this is the best portrayal of war I have ever seen on the small screen.

If you're a big fan of reading like I am, the book by Steven Ambrose is also excellent, and it's pretty impressive how closely the show follows the history.

The Bloody Lovelies - The Ruins of California 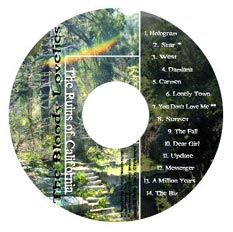 There's a party in your ears and everyone's invited.I once thought alternative rock was dead. I enjoyed bands like Alice in Chains and the more offbeat Primus in my highschool years, but these bands fell apart for one reason or another and their hip-hop alternative replacements just didn't do it for me. Neither did those pieces of shit Creed and their ilk. God I would like to fucking cut out the heart of Creed's lead singer. Aaaaaaarmssss Waaaaaaaaaadeeeeee Opppeeeeeeeen! Fucking dick!

I apologize, I let my anger get the better of me. Recently I discovered that the heart of alternative rock had just lightened up. Radiohead is still going relatively strong (as you can tell by the incessant threads about it in our forums) and a lot of soft alternative groups like Calamine and others have caught my fancy.

One such group recently appeared on my desk in the form of a CD from one of Rich's friends (who happened to be in the band). Rich couldn't give an impartial review, but since I had proven I can be completely impartial with that Return to Castle Wolfenstein "review" above, he decided I should give it a listen. Ohhhhhh good. One of Rich's dopey friends has some caliopie music he put together on his Casio that he wants me to listen to! Hooray!

Turned out I was wrong. Obviously, or I would have been censored by THE MAN, trying to keep me down. THE MAN is Rich Kyanka. He hates black people.

After ripping the mp3s and distributing them on Kazaa, I listened to their CD "The Ruins of California". The Bloody Lovelies are a piano infused and Southwestern (and Beatles) influenced rock band with catchy tunes and often times negative lyrics that juxtapose nicely with their usually upbeat music. Despite my reluctance and the fact that one of their songs is named after an ex-girlfriend of mine, I thoroughly enjoyed their CD. I've even added a couple of the tracks to my mp3 playlist, and that's no small feat. Even though they are somewhat reminiscent of Ben Folds 5 I somehow don't hate them. 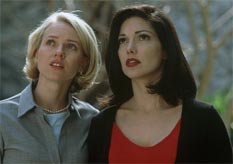 I have to change my pants just remembering parts of this movie. Yeah, you know it, I'm talking about the parts with the rotting corpse.It would be wrong to call David Lynch on the cutting edge of film making. He creates his own edge that is difficult to engage but always fascinating. Having recently seen this movie and only partially comprehended it, I can say without a doubt that if you are fan of David Lynch you'll enjoy it. If you don't like his work, you'll absolutely hate it. I happen to fall into the former category.

Let me take a stab at summarizing the plot. A woman is in a car crash and loses her memory. She stumbles into an apartment she believes is being vacated by a woman headed out on vacation, but it turns out the woman's niece is house-sitting while she looks for a job in the film industry. The niece and miss reverse elephant quickly become friends and attempt to solve the mystery of her past. By friends I mean they have lesbian sex. They get seemingly close to the truth and then everything goes off the deep end and stops making much sense, as tends to happen in David Lynch movies.

Hot girl on girl action aside, there are two scenes from this movie that stand out to me. One is a scene in which the director of a film negotiates with two mysterious men over who the lead actress on his current production should be. The men, one of whom is very difficult to please when it comes to espresso, demand an unknown woman star in the director's movie and he is understandably upset. The other scene takes place at a bizarre magic show of sorts, where Lynch really plays with the medium and the audience, and as always blurs the lines of what makes sense and what doesn't. The themes I get, the characters are fascinating, but the plot is an extremely enjoyable train wreck of logic. Go see this!

Or go see "The One", I heard that has a really cool part where Jet Li hits a guy with a motorcycle!

I'm totally drained. It really is harder to be positive, it goes against the very fiber of my being. I'm sure I'll make a full recovery and be back soon with my usual venom and cynicism.

That crazy Fireman is at it again, just take a look!

Firemen selling ice cream, who would have thought? Not me! But they're sellin' it and dishing out the straight dope as usual!