In Defense of Curling 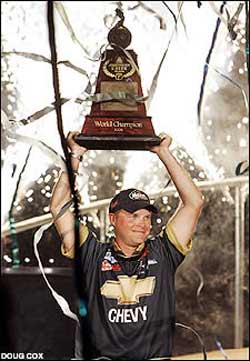 Are you ready to rock?!It was a scene worthy of a Hieronymus Bosch painting. Luke Clausen held a freshly caught bass in each hand and raised them up triumphantly. His strange, frozen smile caught the flash of camera bulbs. The crowd roared its approval. Stadium music blasted at maximum power from amp stacks. Gills seized in the poisonous oxygen. When the pyrotechnics lit up the night like magnesium fires burning in the heart of a wrecked war machine I knew I was watching the end times. A glittering cloud of tickertape chaff descended into the roaring fires. Luke Clausen raised the trophy above his head. The 2006 CITGO Bassmaster Champion had been chosen! Long live the Bassmaster!

People spent a lot of time complaining about the Winter Olympics and the various idiotic Winter Olympic sports. There were myriad tired jokes made at the expense of curling as comedians discovered all over again the hilarity they had forgotten was in their tool kit. "Oh yeah! That curling stuff is part of the Winter Olympics! Time to break out the janitor jokes from four years ago!"

In defense of curling I would like everyone to watch the 2006 CITGO Bassmaster Championship awards ceremony. Say what you will about curling, they don't have pyrotechnics. It's a humble sport. An honest sport. Some girl spent her whole life practicing curling and finally made the cut on the curling team. She came in third. She's just happy to walk home with a medal. Luke Clausen was competing against a lake and he got a cash prize, endorsement deals and hair metal pyro. Luke Clausen got streamers. Do you think Mark Nichols got streamers?

The curling magazine "Sweep!" (there are over twenty bass fishing magazines) described Mark Nichols' gold medal victory at the Winter Olympics as "The feat of a lifetime!" Think about that for a minute. With absolute earnestness, they said that winning a gold medal for curling was his ultimate lifetime achievement. It doesn't get any better than that for Mark Nichols. He trained, he practiced and he struggled.

Luke Clausen didn't even know he won until he reeled in a fish instead of a boot. He didn't even do anything other than sit there in his Chevrolet sponsorship jersey on his motorized boat. This wasn't the CITGO Spearmaster Championship. Luke wasn't sharpening dowels and hurling them at fish in a creek somewhere. He wasn't stepping out of a bathysphere in a diving helmet and wrestling a pearl from a giant clam. Victory came to him of its own volition. 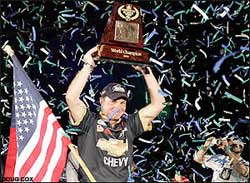 Is that a parade of astronauts or just another Bassmaster?When Mark Nichols appeared at the medal ceremony he had a slightly pasty complexion and a shit-eating grin. Luke Clausen was gleaming with makeup and had that same paralytic smile on his face throughout the entire ceremony. I wouldn't even call it a ceremony. Ceremonies are somber occasions with Aztec priests and robed Freemasons. Even druids steer clear of the pyrotechnics. Too showy. Not so at Bassmaster. It was an incandescent attempt by bass fishing to prove its importance as a sport.

Close your eyes. Okay, wait until you finish reading this and then close your eyes. I want you to close them and then I want you to picture a curling fan. Really take what it means to be excited about curling and then embody that in an image of a person. What do you have? You have a curling player. There are no curling fans. If you're excited about curling you are probably in the running for the Olympic team. Now close them again and picture a bass fishing fan. I want you to think about the kind of person who sits on the couch and watches bass fishing on TV. If your brain is being honest with you then you just pictured a sub-literate mongoloid on Social Security for disability. He has a terminal illness and he is trying to stretch every remaining moment of his simple-minded life out as long as possible.

If you are watching people fishing on TV then you are watching people wait. If the show's producers bothered to edit out most of the waiting or filled it up with a bunch of horseshit about lures then maybe you're mostly watching them catch fish. You just watched a fish randomly get caught by a snare and hauled into a boat. Luke Clausen didn't just score a basket. He didn't hit a home run. He didn't correctly spell a difficult word and beat the robotic Indian kid. Some hungry fish made a mistake and he's hauling the poor bastard into his boat. With all of the GPS and sonar, expensive rods, reels and hand-made lures competitive fishing is still 99% luck.

Hell, even the dying abomination of a trend of televised poker tournaments provided more entertainment. Getting a good hand in poker is all about luck, but actually winning in poker requires a lot of strategy and the ability to interpret subtle visual cues. Well, that's what they say on the poker TV shows they have on the Travel channel for some reason. I'm willing to take their word for it because I really can't be bothered to care about poker either. I just know that every single person who lost that bass fishing tournament to Luke Clausen suffered a bad beat.

You will probably forget about this article four minutes after you finish reading it, but I would like you to try to remember it for four years. Remember it the next time the horrible Winter Olympics roll around and the horrible comedians roll out the horrible curling jokes. Remember that Mark Nichols' lifetime achievement was getting a gold medal in a sport that everyone mocks. Remember that Luke Clausen got pyro and streamers and a sponsorship contract from Chevrolet for catching some fish. Maybe one of these years a fucking net will win.