Interview with an Ice Cream Man 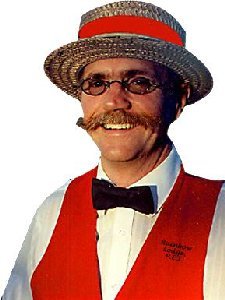 I have always been cursed. The fate that has been bestowed upon me is cosmic retaliation for some heinous crime my ancestors must have committed long ago.

When I was born the doctor punched my mother and retired to become a seal poacher. My father was an alcoholic who left us and died after trying to huff a bag of nails. When I was five I ate a large portion of Pink Panther brand insulation, destroying my bowels for life. The only thing that stopped the pain was cold and refreshing ice cream. I became addicted to the stuff, and my peers avoided me like the plague.

My life had no meaning, no real direction. The year was 1969. It was the summer of love, revolution, and failure. While everybody else was off engaging in groovy sex and experimenting with mind altering drugs, I was alone in my basement consuming jugs of ice cream with only my salty tears for topping.

The only choice I had was to join the Army to fight the slant-eyed devils in the jungle. I hated violence and bruised easily, but thought I could gain some respect by killing a few commie zips and getting a big shiny medal for bravery.

My dishonorable discharge was issued 2 weeks later. The drill sergeant was a surly lout who had never enjoyed an ice cream cone in his life, and it was his personal mission to torture me in boot camp. After he found a sock full of sprinkles in my foot locker for the 3rd time, I was disgraced in front of my company in an unspeakable manner and sent back to civilian life with a permanent black mark on my record. There would be no war for the likes of me.

After that my only drive was to consume vast amounts of delicious ice cream and lounge shirtless in the scorching sun until it curdled in my belly, forcing me to violently expel it to make room for more. But even that activity was curtailed by my lack of income, and my mother's decision to kick me out of the house. I slept in the park where I mugged old ladies for spare change and turned tricks for fudgesicles. My life was barren of all joy, and I was left with only the black void of a craving that could never be sated. I prayed for the angel of death to visit me.

One midsummer's eve, my morbid prayer came true. He appeared to me as if in a dream. I had just gone on an otter pop binge in a cluster of bushes and the plastic wrappers lay scattered around me like so many of my forsaken memories. The man moved like a cat, approaching as silent as a shadow to loom over my bloated body. A dapper hat and bold mustache framed his unnaturally pale face. The smell of spoiled milk and stale barley wafted from inside his red vest -- a vest holding terrible secrets that no mortal should ever see.

I closed my eyes and waited for my demise, hoping it wouldn't hurt too badly. But death never came. Instead the man was sitting beside me, gently placing a soft-serve ice cream cone to my cracked lips. He wrapped his cape around me and took me to his ice cream truck.

My mortal life was still laying there, bloated and alone in the park. I was to become something much more. I accepted the power that was presented to me, and as such I was damned for eternity. 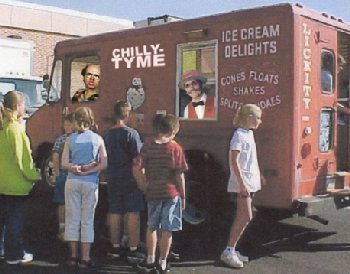 My new master's name was Gary. He was an immigrant from Bulgaria who traveled abroad in the New World as a purveyor of iced goods and sweets. Nobody knew his true age, but it was thought that he was older than the seas and mountains of this world -- assuming the sea and mountains are in their mid-50's.

His craft was an ancient one, existing since man learned to tame the elements of ice, and he was one of the last of his kind. Gary desired a male heir as a companion to carry on the bloodline, and to drive the ice cream truck while he took coins from the crowd of smelly bratlings. That companion was me.

Gary let me stay at his bungalow while he taught me the ways of the cream. He hinted at a great power that would only be unlocked with my undying servitude towards him and my participation in his craven desires of the flesh. It was unpleasant, but I endured for the arcane secrets that would be revealed in time. Gary was the only reason I wasn't dead on the streets, penniless and forgotten. He gave me security, and I was promised the keys to immortality for my devotion to him.

For years I drove his ice cream truck and served him as best I could. My mustache was still weak, but with each passing moon it was growing thicker and more powerful. I could feel myself growing strong, and had confidence in myself for the first time in my life. I was becoming something great and terrible, and was no longer afraid of being nude in the shower.

Gary had a deep hatred for all living things. His defiance against humanity was his own way of battling God for the blight inflicted upon him many years ago. When he was five years old he had been diagnosed lactose intolerant, a condition that made his favorite thing in the world -- sweet, delicious ice cream -- turn to ash in his mouth and poison in his belly.

It was then that he turned away from the path of light and reason, taking the less travelled road to the land of darkness and despair. Children were mere rodents to be sucked dry from their miscounted allowances, and a means to allow overflow his coffers with vast treasure and grow his suburban empire.

I soon found out that Gary could be a brute. He swore in his heathen Slavic language when angered and treated me like a mere slave. I began to openly wonder if he really had any great secret to teach me, or if he was just using as a lackey to do his bidding. He started to become more defensive when I pressed him for knowledge, and soon began to avoid responding to such questions all together. Had he always been this much of a jerk? Had I been too blinded by depression and fear to see that I was being used?

I still had tattered remnants of my humanity lingering inside of me, and this lifestyle sickened me at times. When I turned on the jingling bell, the hordes of unclean would burst forth from their nests to become sick and fat from our evil treats. Gary reveled in the power, but I could not bring myself to enjoy it. I did what I had to do to survive, but I refused to become like him. This battle of wills eventually led to the destruction of our partnership, as well as Gary’s life force.

I was ready to break free from Gary. I learned a lot about the ice cream trade from him, but he had no more secrets to share with me. His treatment was abusive and his visits to my bedroom at night made me shiver in fear. I knew he would never let me leave now. He would hunt me down and find me, no matter how far I traveled away from his terrible bungalo.

I decided that I would destroy him on the night of the winter solstice. It was a time of recharge for Gary, and he would be at his weakest. I laid silently in bed, coyly letting the sheets barely cover my buttocks. Underneth my pillow I gripped the weapon: a sharp waffle cone, which along with rap music was one of the few things that could harm him.

I could hear Gary shuffle into the room. He was moving slowly, drained from quarterly inventory check and aroused from the full moon. He sat next to me on the bed, his long fingernails brushing across my legs. I broke into a cold sweat, knowing that I had to strike soon. He tossed aside the sheet and moved closer so he could touch my butthole.

It was then that I swung around in a fury and thrust the waffle cone deep into Gary’s heart. He let out a deep inhuman scream that shattered the glass Budweiser mirrors on the wall. A geyser of multi-colored sprinkles erupted from his chest, tearing a hole in the ceiling, shooting high in the night sky.

Children of all ages ran from their homes and frolicked in the rainfall of sprinkles that fell from the heavens. Gary was no more, and they were free from his ice cream curse. 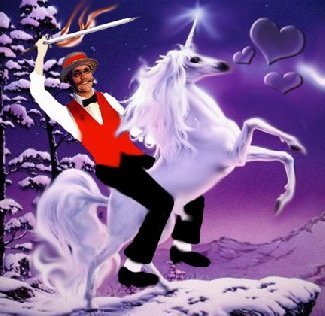 After dumping the husk that was once Count Gary of Ohio into the Salvation Army donation bin, I went back to the bungalow and pondered my future. Would I return to my normal life, where my family and friends saw me as an embarrassment? Or would I use the skills I had learned from my late master and become the new Count of ice cream in this regional area?

The temptation was too great. I choose the latter. With time the suffering I felt began to lessen as my humanity all but faded away. I dealt frozen goods to the children over the summers, their bellies growing swollen and teeth rotten. With the plunder I bought a toaster oven from K-Mart and could cook myself dinners whenever I wished.

I now had the power that Gary once held. But at what cost? Did I destroy a monster only to put another one in his place? Alas it is far too late to ask such questions. I have chosen my path and will follow it to the end, however dire.

My name is Jasper. I am an ice cream man.

A Word About the Cartoon Protests

I want to get a little serious on you and "rap" about all this hate going around in the form of cartoons. As you may know, I was targeted in the past by Jewish extremists over my extremely offensive Hitlerdog comics. Since then I have learned my lesson and switched to drawing Japanese girls with large penises. But still I would like to apologize for Hitlerdog by offering another drawing that will hopefully make up for it. I call it "Islamic Lessons". Please click here to continue. (Must be 21 or have a legal guardian's consent).