Blizzard rarely makes mistakes, which made it all the more surprising when they invited me to join the press beta for Diablo III. 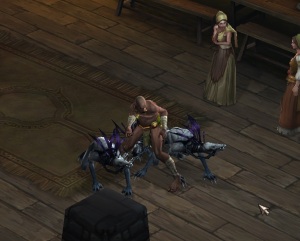 I'm a huge fan of the series. If you don't count the copy of Syndicate that I picked up on clearance several years before I actually owned a PC, Diablo was my first computer game purchase. It was so amazing that I even bought a weird looking expansion that turned out to be a shitty strategy guide website on a CD. The number of times that I started a new Necromancer and ran through Diablo II is disgusting.

Knowing Blizzard's tendency to take their sweet time with development, I had been avoiding Diablo III information. That's what a nerd does when he wants to trick himself into not anticipating a video game. It worked as well as you'd expect - which is to say that it did not work at all.

And so I went into the beta as a fan, with little knowledge beyond the fact that one of the classes - the Witch Doctor - was sort of like the Necromancer. Over the last few weeks I have completed the same 1-2 hour chunk of content multiple times, using each class. Here are some thoughts.

The most striking aspect of Diablo III doesn't come across in videos. It's the surprisingly active role that you adopt as you constantly scan the screen for interactive objects, take in environmental details such as blades of grass reacting to your attacks, and come across randomly spawned bits of content.

Of course there are monsters to click on, but they account for part of your attention rather than all of it. If you're observant you might spot a chandelier or crumbling wall to bring down on your opponents, or a loose tile containing loot, or a dying soldier with a final message. You never feel yourself reverting to passivity because there is always something that you haven't seen before.

It doesn't hurt that the game looks fantastic, not in a technical prowess sense but in terms of artistic style and execution. The word "painterly" gets thrown around a lot, and this time it applies. There were several times when I felt as though my character was standing in a painting rather than a bunch of textured polygons, a sensation made stronger by the very slight matte layer that seems to blend everything together.

Some people complain that the game seems too bright and colorful. Those people are mole people. I am serious, we have finally discovered the hidden race that's been below our feet all this time, biding their time and posting dumb shit about video games on our internet. 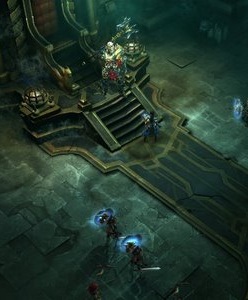 Diablo III is visually as dark as it could get without obscuring the art, which many games seem to purposely do in order to mask their deficiencies. Not only that, but the actual tone is very reminiscent of the original Diablo. There are fantastical elements and characters, but it's all grounded in a world that's full of bleak gothic detail. Your increased involvement with the environment helps the atmosphere come through in a much stronger way than most of Diablo II.

How's combat? The basics are still there, but everything feels drastically different due to the way that abilities work.

Rather than pumping points into skill trees to unlock and improve a handful of skills, you automatically gain specific skills upon reaching certain levels. As a result you will have access to all abilities at their full strength, with the only limitation being the amount of active skill slots in your hotbar. So far all of the skills seem roughly as effective as one another, just with different uses and mana costs.

There are permanent pets, temporary summons, direct damage attacks, slows, damage over time effects, buffs, debuffs, knockbacks, movement skills, heals, builders (free attacks which add to your mana/power), auras, skills that turn enemies into chickens, clones of yourself which draw attention then blow up, and variations on all of the above for short range, long range, area of effect, single target, penetrating, or channeled to name but a few. I wouldn't be surprised if there was a gravity gun somewhere in there.

Removing skill points did not dumb things down. If anything, you have more meaningful choices since creating a unique and valid playstyle from a pool of equally effective skills makes more sense than the old method of hamstringing yourself if you didn't follow one of the "best" cookie cutter builds.

There are also items called runestones which customize skills, giving them one of five possible variations. Take the Barbarian's Leap Attack for example, a simple targeted leap which does damage to the enemies you land on. Adding one runestone to Leap Attack stuns all impacted enemies by three seconds. Going with another runestone pulls all enemies towards your landing spot. Or maybe you want your armor to increase by 700% for a short time after leaping, or to do massive damage to all enemies near the point where you initially leapt from.

If anything, Diablo III seems intent on making your playstyle more important than any single skill, which is apparent right from the beginning of the game.

Towards the end of the beta you have a chance to recruit your first companion, which you can dress up and boss around to your heart's content. I didn't get a sense for how useful he was, but the guy certainly liked to gab about honor as we ran spears and swords through the bloated corpses of the wrongly killed and took all of their color-coded goodies.

If I'm short on complaints, it's because the brief beta experience is polished as hell, nicely paced, varied, and full of changes that feel well executed. It's like playing an E3 game presentation, a feeling that comes full circle when everything reaches a terrific climax then says "Thanks for coming!" just as you want to see what's next.