Did Somebody Say Macho?

Sure, the hits keep coming with the girls, but what about the guys?According to the most recent census conducted by me while trying to open a bag of cookies in my kitchen there are almost 500 billion people alive in the world right now. Of those 500 billion people almost half of them are men. When I finally got the bag of cookies open I pulled too hard on the edges of the bag and the cookies flew up into the air and then landed on the floor. We have cats and cats are not always clean, so as I hurried to cram the floorcookies into my mouth I couldn't help but taste the phantom cat shit sliding down my esophagus. This made me think again about my census. Wouldn't it be nice if we could somehow quantify this 250 billion men figure more precisely?

I immediately set about developing a coordinate based system that would allow any man to determine his or her own position, mathematically, in the realm of the macho. Using a compass and a slide-rule I made a two-dimensional representation of a cube and then drew a semi-circle in it. Then I wrote "FUCKING FAILURE" on it because that sure was a bad idea. I was about to start drawing rhomboids and then stabbing the sharp part of the compass through the paper when I remembered that I own the most powerful computational device ever made next to God; The Human Computer. I am referring, of course, to the Pentium IV. Mine is named "Elspeth".

Elspeth and I set to work forthwith on creating a coordinate based solution to the 250 billion man question. How could the qualities of an entire species be condensed into a pair of numbers? Elspeth and I had a lot to hammer out.

"COMPUTER ACTIVATE!" I commanded as I pushed the power button on the computer. Elspeth awoke from her twisting silicon nightmares with a sigh, ready to assist me however possible. Within reason. Within reason!

"ELSPETH, LOAD: MATH" I ordered my computer. Elspeth was slow to react so I wiggled my fingers and clicked buttons on the keyboard like they do in that Sandra Bullock movie "The Net". Elspeth shuddered to life and opened some sort of file. Was this the answer?

"ELSPETH, MAGNIFY 500!" I commanded the computer and made more movements with my fingers. Elspeth began loading Baldur's Gate 2, much to my chagrin.

"ELSPETH YOU ARE GOING TO BE SOLD!" I tried to threaten the computer.

Hours later, hoarse and red-faced, I collapsed on the floor in front of my desk. When I awoke it was to the brilliant glowing answer to our little conundrum. It was the Machismograph 2000, and it will rock thy world.

The horizontal measure of the Machismograph 2000 is represented by the Swayze-Eastwood axis. On the left side you will see a picture of Patrick Swayze from the film "Dirty Dancing" and on the right side you will see a picture of Clint Eastwood from the film "A Few Dollars More". Patrick Swayze serves as the polar opposite of Clint Eastwood because he represents the sort of soft-and-gooey macho man who instantly repels the respect of heterosexual males but turns women's pants into pools of wet. Can you say, in all honesty, that you have ever felt more emasculated than when you saw the movie "Ghost"? If you can't it's either because you're a woman or you're having flashbacks to "Dirty Dancing". Clint Eastwood, on the other hand, may dampen a few panties but he's more likely to win the respect of the sort of guy who'd just as soon kiss a woman as a scorpion. I'm talking about men who want people to break bottles over their faces for the awesome scars and work on tractor engines because it's fun.

The point at the exact middle of the axis would represent someone who combines, in equal measure, the qualities of Clint Eastwood and Patrick Swayze. The exact middle point between Swayze and Eastwood is occupied by both Tom Hanks and Will Smith. 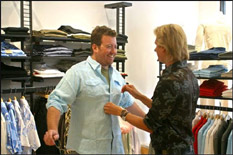 Carson has singlehandedly shifted more men than you can imagine.The vertical measure of the Machismograph 2000 is represented by the Shatner-Kressley axis. On the top you will see a picture of Carson Kressley from the TV show "Queer Eye for the Straight Guy" and on the bottom you will see a picture of an aging, red-faced, and sweaty William Shatner from a "Star Trek" convention. This axis represents more than sexual proclivity and weight, it's as much about personal style and values. Carson Kressley dresses like women want men to dress, but he's also the kind of person who is more comfortable sipping a vodkatini at a Manhattan dance club than playing Madden on the Xbox. William Shatner is the kind of man that a guy wants to be whether he would admit it to himself or not. He's wealthy, dresses for comfort rather than style, obviously eats whatever he wants, and is so self-absorbed that he was probably watching re-runs of "TJ Hooker" when his wife drowned in the pool. 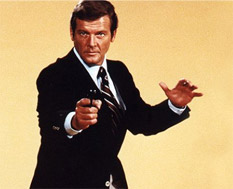 Later in the day James Bond could be seen wearing a hula skirt and eating a whole ice cream cake.The point at which the two axes intersect is the point at which the theoretical "perfect man" can be found. He combines in equal measure all elements of the four polar archetypes and should therefore be appealing to women, tough and sexually-insecure guys, gay men, and big fat slobs. A fictional man comes closest to this precise centricity and he is none other than James Bond as portrayed by a young Sean Connery. The original Bond is tough and willing to kill, handsome and dashing, a good dancer, sometimes treats women like dirt but also knows when to serve them champagne and caviar, uses product, isn't afraid to mix colors but cuts a bold figure in a black and white tuxedo.

Sean Connery himself is wildly different; prone to loutish chauvinism, rumored wife beating, and obscene behavior, he resides well within the Shatner/Eastwood section of the grid. Later Bond actors jump all over the scale, with Roger Moore single handedly flip-flopping Bond schizophrenically across the Shatner-Kressley axis in the space of any single movie.

Let's start easy with someone all of you will recognize. Harlequin Romance Novel cover model Fabio would rate fully towards Patrick Swayze on the Swayze-Eastwood axis and up five points from Swayze on the Shatner-Kressley axis. This is because Fabio is as glisteningly primped as Swayze, but Fabio never starred in "Roadhouse" and was also badly injured by a goose while riding a rollercoaster. Your machismo just doesn't recover fully from being bloodied by errant fowl. Fabio does regain some points towards Shatner by being a salesman for butter. These points he then loses immediately because he was a salesman for fake butter that was available in a non-aerosol spray. Fabio's coordinates on the Machismograph are noted as -15, 5.

Before we begin trying to quantify every man alive from George W. Bush to George W. Washington, we need to work out a more concrete way of determining the coordinates. Entirely without the help of Elspeth (she was sulking again) I devised a simple questionnaire with coordinate modifying values attached to each answer. For the purposes of this demonstration I have appended each response with the appropriate modifier. In a real implementation of the Machismo Graph 2000 we would be conducting a blind survey so that the responses are not influenced by foreknowledge of effect.

Answer the following five questions carefully and record the number in parenthesis on a piece of scrap paper. If you don't have any scrap paper handy try carving the numbers into your inner arm with a sharpened stick.

Add up the total from your answers and plot your coordinate on the Swayze-Eastwood axis in pencil. When you have this point plotted draw a line vertically through it extending it both edges of the graph, then continue on to the second set of questions.

Answer the following five questions carefully and record the number in parenthesis on a piece of scrap paper. If you don't have any scrap paper handy try calligraphy on grains of rice.

Add up the total from your answers and plot your coordinate on the Shatner-Kressley axis in pencil. When you have this point plotted draw a line horizontally through it that extends to both edges of the graph. This line should intersect with the line going through your other point, giving you your correct position on the Machismograph 2000. Congratulations!

Don't Blame Me, I Voted For Phriday

Hello audience, Livestock here. Greetings. Hello. Well met all around! I just got back from closed door meetings with the SA Forums Union and I'm happy to report a strike has been averted. To celebrate the new deal, we've got a satisfying new helping of images based on the idea of seeing what would happen if famous world leaders had entirely different jobs. This, for example, is an example: Oh that Idi Amin, is there anything that rascal won't do? Find out what he and other delightful chaps are up to by clicking here. Oh, and by the way, there are 4 pages of crappy images for you Page of Shame fans.