The Case of the Supermarket Strangler 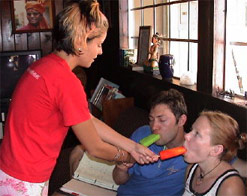 Here's a mystery you can solve at home: What the hell is going on in this picture? Please tell me. The city was a cold and cruel place, and it would kill you if it could. Amidst the honest people trying to get by, there lurked a criminal element constantly preying upon the weak. It got to me so much that I thought clothes and the ability to walk upright were all that seperated humans from the very animals that we ate. But then I pushed my shopping cart out of the meat section and into the produce aisle, and began to think that maybe clothes and the ability to walk upright were all that seperated us from oranges. I didn't really know because I wasn't a philosopher or a citrus expert, I was a private detective. Or at least I had been a private detective. I had hit paydirt on my last case, and used my sudden windfall to go into an early retirement. But as I stood in front of the oranges at Sonny's Touchless Supermarket that day, I wondered if retirement had been such a good idea. I took an orange and held it up to the light, squinting as I pretended to discern its freshness while contemplating my retirement.

Sure it was great to be able to pay the bills every month, and to not worry about the sort of unpleasant surprises that tended to occur during an investigation. Surprises like the time that Frank "Kick You in the Crotch" Bannon punched me in the face, or when Steve "Three Hands" Malkmus turned out to really have three hands. I know it's his nickname and all but I didn't expect him to have THREE HANDS. But in some ways I missed these surprises. Missed the way that the uncertainty which went hand-in-hand with my line of work made me feel alive. Missed it all.

Besides, I felt out of place here doing normal things with normal people, whom I didn't feel comfortable around anyways. Appearing to focus on the pineapple I was now holding up to the light, I secretly snuck a peek at my fellow shoppers. An old woman looking at her coupons with a puzzled expression. A dead man sprawled out on the ground. A disturbingly ugly man perusing the magazine rack while picking his nose. I mean seriously ugly. What the hell was up with that? No sir, I didn't belong with these people at all. Just as that thought crossed my mind, a cashier rounded the corner and abruptly stopped, letting out a blood curdling scream.

I quickly spun on her, grabbing her by the upper arms and shaking violently as though I were a very subdued Ike Turner or a very excited James Brown. "He already knows how ugly he is," I said while pointing to the man at the magazine rack. "You don't have to point it out! Don't you think he has a mirror? Don't you think he prays every night to simply be normal, and wakes every morning hating God just a little more? You should be ashamed of yourself."

I shot the ugly bastard a wink and realized he was sobbing. He must have been overwhelmed with joy that someone was finally sticking up for him.

"What?" The fear had begun to leave the cashier's face. "No! There's a body!"

Upon a second glance, the dead body I had seen laying on the ground did seem a little suspicious. The man's head had been smashed in, and there was a note lying on his chest which read "I hate you so much! I murdered you! GRR!"

I was beginning to suspect foul play.

"No one move!", I shouted. The crime scene needed to be preserved, especially at this early stage which was so integral. My well-trained eyes scanned the area surrounding the man's body, and all at once my detective's instincts were back in full force. This was what I was made for, and I was wrong to ever leave. Somewhere deep inside of me at that very moment, the decision was made to open my office again. Within seconds I had not only spotted the clue that broke the case, but found the killer as well. The veins in my head throbbing as my pulse quickened, I reached into my holster and pulled out Betsy.

And take a closer look at the painting in the background. I repeat: Please tell me what's going on.

Betsy wasn't a woman, she was my gun. In some ways I suppose she was like a woman though, in that I had to keep her well-oiled and out of the reach of children. Unlike any dame I've ever known, however, Betsy had stuck with me through all the bad times in my life; from the time I shot myself in the foot by accident to the time Mystery Science Theatre 3000 was taken off the air to the time I shot myself in the foot on purpose. Hers was a quiet and steady devotion, the kind that you would only be able to find in inanimate objects that have no choice in the matter. What I admired about her most wasn't any of this, though, it was the way she punched ridiculously huge holes into things. Betsy shot bullets, not water (trust me, I tried and it didn't work), and when I took her out it meant business. It meant the decision had been made, and someone was about to get acquainted with the afterlife. Because they'd be dead.

Betsy was out in a flash, and my experienced gunslinger's hand trained the weapon's sights on the killer. The man's head had been bashed in by a blunt object, and beside his body was a jar of pickles, its thick glass covered in blood and grey matter. Before it could move, I pulled the trigger and the jar exploded into a thousand pieces. I stood in silence for a few moments to make sure there were no more movements from my target, then put Betsy away.

"Wait just one second," Mr. Ugly broke in, "you think the murderer was a pickle jar? A damn pickle jar?"

I was surprised to see him turn on me after the great pains I had taken to come to his rescue only moments earlier. I shot him a quizzical look which said "how could you?", and also "you really are ugly". My eyebrows are really flexible.

"Hard to believe that a jar full of pickles is capable of such a thing," I replied, "but science can do incredible things these days."

The cashier shook her head in denial. "You're saying that jar of pickles was somehow bioengineered with the capability to murder a full grown man on its own volition, and to write a note to leave on its victim? That's ridiculous."

She balled her hands into fists and gritted her teeth. "No, ridiculous."

As she struggled to find the correct reply to my ironclad argument, I said "obvious" one more time and walked away, clearly winning the battle of wits. There was no doubt about it; I was back in the detective game for good, and I couldn't lose.