Get Your Summer On! 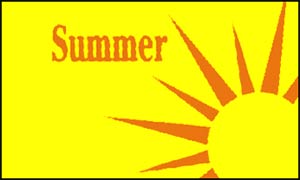 Hell yeah, let's get it on.Due to the fact that I live in the cold, arctic recesses of America's Midwest – the asscrack that the world forgot to wipe – I am very much looking forward to the impending arrival of summer. I have suffered through twenty-two terrifying winters in this abomination of a land, and each one brings me closer to the realization that cold temperatures are the greatest threat to my personal freedom that I have ever faced. There is something inherently wrong with life when you are instantly subjected to freezing blasts of wind that haunt your body like a ghost bar mitzvah the minute you step outside of your house. There is also something wrong when you have to claw your car out of a block of solid ice just to be able to see out of your windows when you slide off the icy roads into a snow-filled ditch. Is this the freedom our Founding Fathers fought and died for in Vietnam? If this counts as living the American Dream, then the American Dream is a nightmare not unlike those that claimed the lives of the characters in the "Nightmare on Elm Street" movies. I think it's time to get rid of this winter shit once and for all, because it certainly isn't benefiting anything but penguins and polar bears. Last time I checked, those foul creatures didn't even pay taxes.

Needless to say, when warm weather arrives I plan on taking full advantage of it by venturing fourth from the fertile bosoms of my bedroom at least a half dozen times or so. I simply cannot wait to get out there and really make the most of the sun's sinister radioactive rays of light, baking my skin to a cancerous crisp as I pursue manly outdoor activities. I mentioned hiking as a fun outdoor pursuit last week, but good golly, there are tons more things you can do than just hike. Summer almost unilaterally means unbridled fun and excitement for everyone. People go outside to beaches, parks, and elsewhere to crowd around like robots in a magnet factory, all while enjoying the weather with impunity. Because I'm told that there are only two types of people that read this site – the mentally handicapped and unregistered sex offenders – I think it's only fair that I give you an overview of the more popular summer activities practiced by normal people. 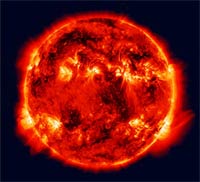 Getting Tanned
Tanning is a trendy pursuit for those wishing to look less zombie-like, thereby ensuring nobody will mistakenly shoot them in the head. Unfortunately, I'm seemingly incapable of getting a tan, and thusly take a lot of blows to the head from zombie hating bigots. As an occasional believer in karma, I'm confident they will eventually get what's coming to them when I run them over with a rented SUV. The best way to get a tan, I'm told, is to expose yourself to the sun in a non-lewd and lascivious manner. Then, as your body absorbs the sun's rays, the chloroform in your skin begins to produce oxygen, which, in its purest form, stains your skin red. This process is called Adobe Photosynthesis I think. I was having an epileptic seizure when this was all being explained to me, so I might have gotten some facts wrong.

Getting Athletic
While I myself don't condone sports, it's not a crime to actively pursue them. In fact, it's often encouraged, because of the benefits of physical activity. I don't deny that it's beneficial to be physically active as opposed to being a corpulent fatass that never moves unless a forklift or crane is doing all the actual work. Popular sports today include Frisbee, horseshoes, and blackjack. My favorite sport is hunting, because it involves murder. 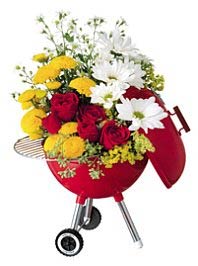 I don't know what the hell is happening in this picture but this certainly is not how a cookout works.

Having Cookouts
Nothing beats the fun of gathering around and removing the "raw" from "raw food" by way of the cherished element of fire. Sadly, some people take this to ridiculous extremes, with outdoor grills that cost more than my car. I think the point is that you are outdoors and you need to cook your food with fire, not treat it to some luxurious spa and sauna inside your fabulous resort hotel of a grill, powered by a small fission reactor and staffed by tiny gnomes. Bitter barbecue politics aside, this is an ancient tradition that may well date back to cavemen cooking dinosaur meat over an open flame while exchanging humorous anecdotes about clubbing their wives. What was once daily life for our primitive ancestors has become a cherished warm weather ritual comparable to Gary Busey's annual "taking of the shower." As an avid proponent of hot dogs, I highly recommend consuming them on any summer occasion, cookouts especially.

Having Fun With Metal Detectors
Do you ever wonder what the hell is wrong with those people who, at ridiculously early hours, go out with their metal detectors and roam the beaches looking for buried treasure? Me too. So don't fucking do that. Spend your summer doing something that isn't so goddamn crazy and futile. Nobody sane does this goofy shit.

Starting a Garden
I'm just kidding, nobody sane does this either. 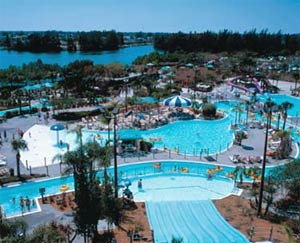 Come back warm weather, come back!

Getting Wet
With a warm climate, you can safely go swimming and not end up frozen like Captain America was for so many decades. Also, it's highly unlikely you will have the benefits of the super soldier serum to protect you, so any such aquatic freezing will surely be your downfall. Swimming is a spectacular summer activity made even more exciting when waterslides are involved. Do yourself a favor and go swimming as much as possible. America is rich in pools, water parks, polluted lakes and oceans, and beautiful fjords. When playing in the water, though, we must be careful not to drown. Funerals are definitely not summer fun, at least not until they incorporate buffet tables around the casket and live DJs.

Flying Kites
Kite flying might seem shocking and offensive in this modern day and age where fun and innocence died at the bloodied hands of terrorists, but it really is quite an exhilarating experience. Flying kites is serious business, and you want to make sure that you have a sturdy kite, plenty of open space, and a nice windy day. I'm pretty hardcore about kites, as I like to really punish the sky with my bad boy. I have a custom kite made out of high quality leather, and I hold and guide it not with some puny string, but with a chain. When buying or making a kite, you want to get one that dominates the sky and isn't the least bit submissive to gravity. When my guy is up there whipping around, it makes me feel powerful and in control. That's what kite flying is all about: domination.

Like the alluring moans of a Tusken Raider, summer beckons. Though we may still be trapped in the pincer claws of March, it's only a matter of time before enough time passes that it's no longer March. And that's when it will be warm, unless of course we wait to long and it ends up winter again. I think the only logical thing we can do is adopt a wait and see attitude and work at learning how to hibernate.

Hey folks, it's your good friend Taylor "Pimpy P" Bell here with a new type of article, at least for me! I have taken a break from reviewing shitty games and reviewed a shitty movie! 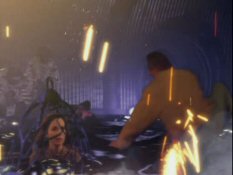 Sadly, that opening scene is the high point of the entire movie, as the next scene lets us experience all the excitement of a graphic designer sleeping on the keyboard. The hero of the story, Gordon Hauge, is rudely woken up by his boss, who proceeds to lean over and start hitting random keys on the keyboard, which somehow makes the mouse cursor move across the screen and close the image Gordon was working on. This causes the image to be erased, since Gordon’s image program isn’t one of them newfangled ones with a “Save changes?” dialog, and after a brief argument with his boss, Gordon drops a verbal atomic bomb by standing up and declaring “You’re gonna get squat right now, you narrow minded, uncreative buttplug!”

Sounds exciting, doesn't it? Read the full review before I smack your bitch up.