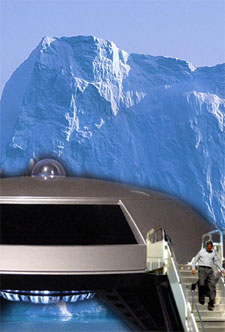 Rejection can be hard to face.

It was early January when the aliens came, according to certain crazy people. Dundas, Greenland was their landing zone. Turns out they found the 1977 satellites we launched, really liked the Chuck Berry on them, and came by to see if we had any more CDs. After a few nervous phone calls, the aliens and humans set up a date for their introduction to Earth life and culture.

Leaders on both sides had been carefully chosen to meet. Everyone was nervous that night, their leaders emerged wearing deep grey robes. Earth leaders, all decked out in their impressive [url='http://i.somethingawful.com//sasbi/2007/01/thegoblin/1-2-06blinddate1.jpg']suits[/url], saluted the aliens in respect. Looking out over the earth leaders the aliens felt very gangly and that they should have worn better robes. They made a comment about not knowing how formal they should be and offered to change their attire. Earth’s leaders exchanged some mumbled apologies, but the aliens finally just dropped the subject.

“I see you have your own flying craft.” Robby, the leader of alien agricultural affairs said to the President.

“Oh yeah, I just got it. My uh, my country lets me take it out whenever I want.” The US President stammered as he looked at his shoes. He should have worn the brown ones.

Each of Earth’s leaders was doing a good job of making a first impression. The President of Russia brought a flower that was native to his country. The aliens said that they couldn’t fit any gifts in their spaceship due to weight concerns, so they all felt a little embarrassed. And fat. To make conversation the aliens inquired why we call a place with so much ice “green”. Laughing, the politicians explained that it was a ploy to fool the Vikings. The aliens laughed too, but thought they were making a reference to the very real threat of Space Vikings.

They paired off then went to their own restaurants, offering the aliens such exotic places as the Olive Garden and Crankers. Each alien leader was brimming with questions, something that put the Earth leaders right off. They wanted to “just have fun” with the visitors, nothing serious. But this did not translate well from species to species.

Despite Earth’s obvious attempts at not seeming interested, the questions kept coming. Poverty came up between the alien and the Russian President, who was desperately waiting for the food to arrive.

“Do you have it on your planet?” Rob, the alien labor leader asked. Its forehead furrowed as it studied the President’s face.

“Poverty? Oh, oh no. We got rid of that a long time ago. Everyone here on Earth seems to get along pretty well.” He said. Rob kept its eyes wide and firm, studying the nervous Russian as he kept tapping his fingers and began to sweat. He grabbed the water slowly and drank it quickly.

“Uh, yeah. We have a bit of it, I guess. I mean, you know, you can’t win them all, right?” He laughed nervously and sighed, wiping the sweat from his forehead with a dinner napkin. He really, really wanted those cheese sticks now.

The Chinese Prime Minister tried to tell a joke to lighten the mood but Robadon, the alien judicial ruler, didn’t really care for it. This was most likely due to its lack of knowledge on “rabbis”, “priests”, “bars”, and “walking”. Staring at the bathroom doors, the alien wished it knew what earth gender it was so it could run off to the bathroom. This problem was compounded by the aliens having evolved past the point of genitals.

Thankfully, the pre-dinner conversation did not last that long. Fine china and silver platters were presented to the aliens covered in the exotic and delicious. Stacks upon stacks of food were unveiled to the aliens, which just made the aliens feel even fatter. 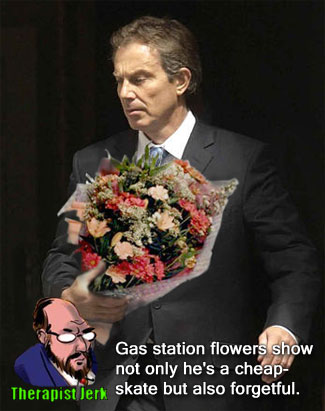 Next they all left for the movies. The Prime Minister of Japan wanted his alien companion to watch “Citizen Kane”. And the rest of the leaders chose randomly from a list compiled by their citizens, ranging from “Matrix Reloaded” to “Big Momma’s House”. It did not get easier for the aliens when they arrived in the theater, however. In an effort to make the films seems more interesting, the Earth leaders laughed and slapped their knees as they heard a joke or started to weep openly as the films got more depressing. This did nothing but completely frighten Robathan, the alien leader of transportation, making him leave to “go get some popcorn” in the middle of the movie.

After the movies were over the aliens said they all had to get back to their mothership. They said their alien All-father had set a curfew for all of them at 10pm. They were taken back to their ship, but not without protest. The US President made the suggestion they travel as a group to the bar, but they declined. Determined, the leaders of Earth insisted on at least walking them up to their mothership.

The Prime Minister of England, kept asking if he could perhaps meet their All-father sometime.

Finally the aliens were inside their ship, looking out at all the earth leaders and earthlings holding up signs that read “Probe me” and “take my wife… please.” All at once, the leaders of Earth peered at them, stuck out their thumbs and their pinky fingers, and while placing their hands up to their heads they whispered, “Call me.”

Unaccustomed to what a forced alien smile actually looked like, the Earth leaders walked away and started to chat about how they would like to do this again. The Prime Minister of Norway mentioned he wanted to take one to show him his house and just sit around, maybe listen to some music and watch cartoons. The US President said he “[url='http://i.somethingawful.com//sasbi/2007/01/thegoblin/1-2-06blinddate3.jpg']felt a real connection[/url]” and expected them to call back soon.

The next morning the spectators awoke to find the aliens had completely vanished. They didn’t leave a note, no voicemail, not even an e-card. Earth leaders were devastated. Newspapers said the Russian President spent an entire week doing nothing but eating Doritos and sitting next to his phone.

Months later the Prime Minister of Australia claimed he picked up a call from an unknown number during a meeting with his advisors. Immediately recognizing the voice, he asked them why they hadn’t called. The aliens blurted out some words, barely recognizably, and then hung up. The Prime Minister could have sworn he heard not only “wrong numbers”, but also “It’s not you, it’s us.”