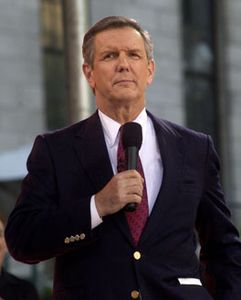 After the smoke had cleared from the Republican's brutal war, the Democrats came out and acted like adults, which meant it was fairly boring. To make up for this, the moderator, Charles Gibson, decided to do the worst job possible. His questions were mostly insane what-if's, like "What if Pakistan was run by Al-Queda and threatened the world with nukes?", "Yeah but what if after you attacked them and took the nukes away they got more nukes but you had already withdrawn the troops? Why did you withdraw the troops, you idiot?" and (these are all basically the questions he asked) "What if a nuclear bomb went off in an American city? What regrets would you have about what you hypothetically didn't do to prevent this hypothetical explosion?"

In between forcing the candidates to outline what their response would be if they were suddenly living in an episode of 24, ABC inserted inappropriate self-promotion, forcing both the viewers and the candidates to regularly sit through clips from ABC SPECIAL REPORTS!!!! which were nether special nor reporting, and often didn't even have anything to do with the topic under discussion.

The candidates did mostly what you'd expect: Obama did his best to look noble and above the fray. Clinton harped on experience and tried unsuccessfully not to sound like a fairy-tale witch. Edwards lovingly stroked Obama's sleeve and agreed with everything he said. And Richardson seemed dazed, out of place, and made a half-assed attempt at looking presidential by pounding the shit out of the podium with his fist whether it was his turn to talk or not, earning him the nickname on the Something Awful Forums of "Thumper".

Having just given inordinate attention to Iowa (Iowa!), the media and candidates now are devoting their attention to a tiny New England state where the vote may depend on having pancake breakfast with each potential voter in their home. What will happen on Tuesday? God knows, and in practical terms it doesn't matter. New Hampshire has never swung the vote on anything ever. But in terms of image, people will project the outcome of entire campaigns based on what the grumpy old people who shuffle out through the snow to cast their vote think.

Maybe Ron Paul will actually place third, as he is currently polling there. That would give some hope to his disappointed supporters, and ensure that when he is inevitably crushed in every vote after that, I would have plenty of material to enjoy on their forums as their world fell apart around them once again.

Quite possibly Huckabee will be buried by McCain as the current polls (and last night's debate) suggest. While I will miss Huckabee's gee-whiz combo of Mr. Rogers and the Left Behind authors, McCain has shown his grizzled old man routine can be equally fun to watch.

In the meantime, Hillary is doing her best to boost her flagging campaign by borrowing a move from Bush and telling everyone that horrible things will happen to them and their children if they don't vote for her. Here's a mailer she just sent out: 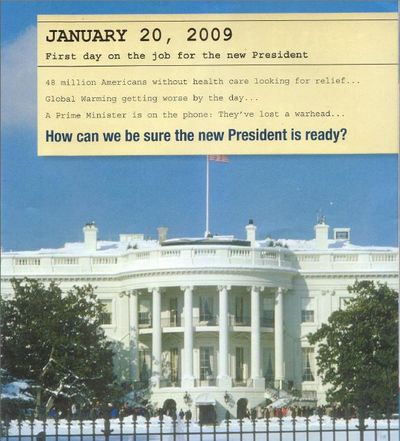 Apparently she's been talking to the people that wrote the questions for the Facebook Debate. If a Prime Minister calls you up with a message like that, I'd recommend getting CTU on the line right away. I'm sure her attempt to blackmail democrats with fear will prove to them that she really is serious about change or experience or getting as much power as possible or whatever her campaign message is.

Whatever happens, the fun will only have just begun. God bless America. God save us from democracy.