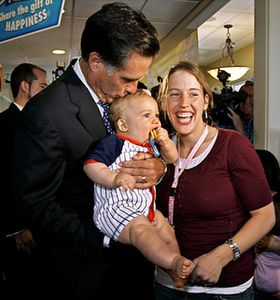 To be honest, I watched the Republican debate mainly because Ron Paul was involved and the thought of serious candidates having to respond to points made by a politician who's basically Stan from South Park in full "I learned a lesson today" mode sounded entertaining. Paul, however, was relatively subdued, and only occasionally wandered into territory that caused his fellow candidates to sit there quietly for a few seconds and pretend that he didn't exist before continuing the grown-up discussion.

Fred Thompson seemed to be napping for much of it, once in awhile coming awake when called upon to ramble for thirty seconds about an unrelated issue before stumbling to a stop and asking the moderator to repeat the question that everyone had been discussing for the last twenty minutes, at which point he would mumble a little bit and go back to building a fort on his podium out of pencils.

The real star of the show turned out to be Romney's destruction at the hands of his opponents, resulting in an overlong, sputtering monologue that buried his campaign for anyone watching. The attack was led by a surprisingly smooth McCain, who spent most of the debate hurling stinging one-liners at his opponents while somehow managing to come out not looking like an asshole. A typical exchange went something like this, when Romney bizarrely decided to get on the subject of change (this is the New York Times transcript with some Fred Thompson droning excised for readability):

Romney's one-liners in return were less than snappy, all being stuff like this:

John McCain might as well have whipped his nuts out and laid them down on Romney's forehead, because then Romney would have at least been destroyed with some dignity.