The primaries are about to kick off, and things are already getting entertaining on the political front. Instead of sticking to one topic today, I will go off about a lot of different stuff that's happened lately. I've written a whole lot of words about the election, and I'm passing the savings on to you!

Let's get started with an exciting subject! Something to really get everyone going! I know, how about the state of Iowa: 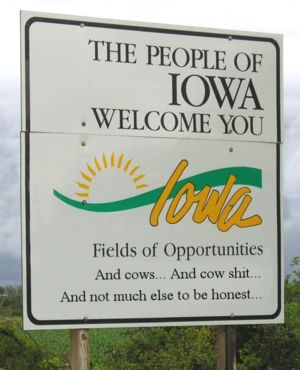 Iowa is a state that the world thinks about exactly once every four years. I bet even people that live there tend to forget it exists. Yet come election time, everyone waits for the type of people who would choose to live in Iowa to tell them who will be nominated for president. Not only that, they use the caucus system to decide. If voting in a booth was like making toast (push the lever, you're done), then the caucus system would be like hundreds of people standing in a school gym playing stupid little power games with each other and then trying to base the vote on chaotic headcounts. I think I lost my analogy somewhere in there, but the point is: Iowa.

Obama and Huckabee were the big winners, which means they get to ride high until the next vote in which everyone starts over again. The real fun was watching who the candidates had behind them when they gave their post-vote speeches. Hillary crowded the stage with faces like her husband (maybe you've heard of him) and the craggy visage of Madeline Albright, to highlight that she is really invested in change by doing everything exactly the same as her husband. Obama meanwhile put a crowd of young voters behind him, which made for inspirational television, but meant that they had to sit there and watch his back the entire speech. Huckabee had the weirdest crowd behind him, featuring Chuck Norris and a woman who had more plastic work on her face than a factory making soda bottles.

Huckabee may be the first candidate to use an annoying internet meme to back his campaign. On the other hand, his campaign is now the first Chuck Norris joke I find funny.

Another unexpected benefit of the Iowa results was the crushed dreams of Ron Paul supporters across the nation. These angry young suburbanite white men, burdened with every advantage society could give them, were sure that a revolution would happen in which Dr. Paul, despite appearing in every poll as the minor punchline he is, would somehow leap to the top of the pile like some kind of gnomish free-market superman.

Unfortunately, it appears that relying on the World-of-Warcraft-playing demographic meant having a base that couldn't be bothered to get off their asses and vote, resulting in a less than stellar fifth place showing. Although he still, gold standard lunacy and all, beat Giuliani, which might have been because Giuliani didn't bother to campaign in Iowa, or might have been because Giuliani could be replaced at almost any public appearance with a large American flag propped up against a small boombox playing patriotic music. The boombox/flag combo would probably also more directly address the issues.

In any case, fifth place with a double-digit percentage is not a bad showing for a lunatic fringe candidate, but for those people sitting at their computers waiting for other people to somehow do some kind of revolution or something, it was nothing less than the end of a dream. Which meant that the official Ron Paul forums were extremely entertaining just after the Iowa loss, if you're into that kind of thing. I am. Here are some excerpts: 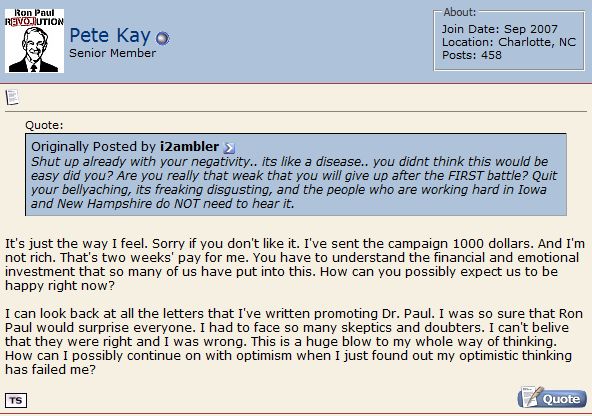 I think I'll keep this post around to cheer me up if I'm ever feeling like bad people don't get what's coming to them.