The Fable of the Large Cave Possibly Containing a Blob Creature 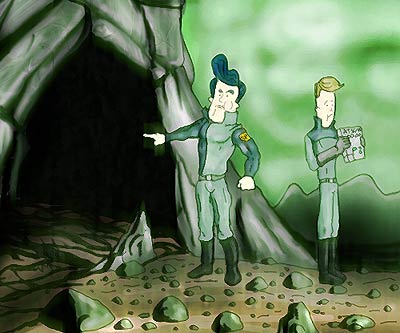 The air on Flogbert IV was choppy at best and skipped through our lungs like a broken record. Every breath left something to be desired and made us long to inhale the kind of real air ventilation shafts are famous for. This was the consensus we all reached two minutes after crash landing. The whole planet was sick, submerged in a nauseatingly green atmospheric veil. Flogbert IV was the bastard planet of an inbred solar system, a nightmarish aquarium drowned in bad soup. Until help arrived, it would be our home.

The rocky surface was merciless, so it was no surprise we had nowhere to make a safe landing when an unexpected systems failure put the HMS Prannybucket in grave danger of exploding across the cosmos. The emergency landing was rough, and left the mighty spaceship torn into all manner of asunder along with our chances of making it back to safety. Our only salvation lied in finding shelter on the planet's harsh and geographically sassy surface. That's what we told ourselves when we went in search of a cave to use as temporary living space. That mission proved more complicated than we had anticipated.

"You're going to have to go into that cave, I think," said Captain Stubs. "It's the only way to know what's really in that cave."

"I'm pretty sure there is a large blob creature in there, Captain," I replied. "That's what Lieutenant Dootleberry yelled shortly before he screamed and then stopped screaming and then was never heard from again."

"Nonetheless," Captain Stubs replied, "we must ascertain for sure just what is in that cave before we exhaust it as a possibility."

"It could be candy for all you know!" interjected the determined Captain Stubs. "It could be delicious candy and by the Gods I'm not going to turn a blind eye to the chance Lieutenant Dootleberry is simply lost in the orgasmic throngs of a giant gummy bear while we're out here, in the elements, staring into the mighty abyss of this ominous cave."

"Well," said the meek Intern Winterfresh clutching his Atscan 5000™ atmospheric scanner, "I'm pretty sure it's not candy in there because it smells like sulfur in the readings I'm getting say it's full of sulfur."

"Sweet, sweet sulfur. There was a time when sulfur was as prized as a good onion," stalwart Captain Stubs replied. "Let us make sweet onionade out of these onions Flogbert IV has had the good sense to give us. Now, you two, into the cave!"

Captain Stubs was insistent that Intern Winterfresh and myself enter this menacing cave, just as he insisted naïve young Lieutenant Dootleberry enter. He did have the good sense to request Dootleberry leave his sack lunch with us, but that's barely erring on the side of caution in a situation as grave as this. It was clear he was not thinking in our best interest, nor his own, and was in fact seduced by the siren song of the cave.

In my days at Space Academy I had read many a tale about the dangers of caves. Many regarded their powers as myth, but it was quite clear to me now that the legends were true. Some unknown power in the darkness makes a man forego his self-preservation in favor of sacrificing everything to the rocky orifices of distant worlds. "Cavelust," they called it. It was obvious this power had now locked onto Captain Stubs and was playing him like a theremin.

"With all due respect," I began saying, "I think you might be enticed romantically by the cave, and thus you are not thinking properly. I think we can all agree that the context paints this cave in an unflattering light."

Intern Winterfresh was quick to chime in, nodding his head in support and then pointing to the word "sulfur" displayed on his Atscan 5000™.

"I will not tolerate a mutiny. Not in a desperate time like this! That cave is our only salvation, and we should look at as such! If you won't sacrifice yourselves to its majesty, you aren't even men in my book!"

"But don't you see? You just said we should sacrifice ourselves! That's not very smart. Look, I know this isn't the best time and all, but I'm going to have to refuse your order to go in that cave. It's just too risky. I mean it ate Dootleberry!"

"Go in there, damn it!" he yelled as he started violently pushing my shoulder in the direction of the cave's incredible maw. I was not about to let him throw my life away, not like this. I spun around and clocked him in the face with my big hand, then swooped in low for an uppercut with my little hand.

Captain Stubs was a great leader in his time, and was known throughout the galaxy for his heroic work promoting literacy amongst the zinc miners of Kolob. Rumor has it he even karate chopped a great sea tortoise in two to defend the honor of his high school. Now Captain Stubs was strangling me with a mad look in his eyes that made me feel very uncomfortable. His hands coiled around my neck with such intensity that I feared they might need to be surgically removed.

"Heeeeelllllllppphhhhh!" I muttered as I frantically tried to pry the mad Captain Stubs' hands free from the fleshy tower primarily responsible for keeping my head slightly above my torso.

Meek Winterfresh seemed hesitant to get involved, probably fearful of jeopardizing his internship. You could see the fear in his mind dividing his thoughts into two distinct summer camps: the one where everyone runs a lot and gets active, and the one full of handicapped children too sick to run or do anything that resembles youthful activity. I was afraid he was just going to sit there and watch Captain Stubs strangle me to death.

"Winnnttterrrrrfreshhhhhhhh!" I murmured, hoping to wrangle the underdog into action. At this point he was awkwardly rechecking the readings on the cave with his Atscan5000™ while pretending his Captain wasn't strangling his crewmate to death. Thankfully, my whimpering and spastic gasps for life seemed to finally rile him into action, into the summer camp of the strong and active thoughts

"Oh, okay!" he half-shouted in a nervous and uncertain voice. Without a hint of grace or poise, he moved in and slammed his Atscan5000™ against Captain Stubs' head, knocking him unconscious and freeing me at once from the claws of death.

"Oh, god, Winterfresh, I think you killed him," I said as I examined the corpse of Captain Stubs.

"No, I think that's the cave back there."

"Oh," Intern Winterfresh said in an embarrassed voice as he eyed the corpse of Captain Stubs.

During the struggle I failed to recognize the change in atmosphere. The sky was now dark and flickering with violent flashes of light. A storm was brewing, and if I knew my science, it would be a sulfur storm.

"A storm is brewing, Winterfresh. We need to find shelter!"

"We don't have time. The only shelter is that cave, and it ate Dootleberry!"

"Correction: the blob creature ate Dootleberry. We... We have to appease the blob monster."

"A sacrifice?" he asked inquisitively. I nodded approvingly.

"Yes," he said. "We will give the blob monster the Captain! No one will ever know what happened."

Hearing the craven whistling of the sky above, we quickly worked to decapitate Captain Stubs and impale his head on a stick at the mouth of the cave. We then strung his intestines all about the opening like fanciful sheets of cloth in some royal hall. This, we felt, was proper tribute to the great master of life and death that is the Blob Monster, our God and Savior.

"It's not done," said Winterfresh matter-of-factly, who then garnished the severed head with the elements of Dootleberry's sack lunch. I smiled approvingly.

"The Blob Monster will undoubtedly give us seats in his great empire now!" I said to Intern Winterfresh, hoping to boost his spirits. He looked a bit depressed, even after all the gusto he put into stringing the Captain's entrails about.

"He is just and wise," replied the pusillanimous intern. "He is everything we are not."

We waited in the elements as long as our courage would allow, but we were between a blob monster and a sulfur storm, as the saying goes. We had to make a move if we were going to secure a future.

"Great Blob Monster, Lord of Light and Logic!" I shouted into the endless dark of the cave, letting it echo my important words. "We have prepared you a feast of our commander, and submit to you as our new leader!"

There was no reply, so again I shouted. "Great Blob Monster, please come forth and dine on our guide, so that you may absorb his knowledge and the knowledge of man into your gelatinous form!"

"What?" a voice replied. Dear god, it was Lieutenant Dootleberry's voice!

"Dootleberry?" I yelled back in voice so overwhelmed with shock that I was worried it was going to electrocute my face.

Lieutenant Dootleberry walked out of the cave with the biggest handful of gummy bear I had ever seen. He was both smiling and looking disappointed at us.

"I was wondering when you guys were going to finally come in. We've been waiting for you!"

"Say," Lieutenant Dootleberry said. "What's that behind you? And where is Captain Stubs?"

I was standing in front of the impaled head, and the body had already been torn to pieces. I didn't want to move away, to show Dootleberry the horror of what we had done in our panic.

"Having a surprise party in a cave on Flogbert IV!"

"Yes, Captain Stubs thought it would be a great way to relax after the trouble we had back on Seweria, that dreadful sewage planet! You nuts probably thought he had cavelust, didn't you?"

He shook his head in disgust. "Well, damn it, now the party is ruined."

"But what about the sulfur?" inquired Winterfresh.

"That's the pitcher of onionade. Damn it, did you know his wife is in there? She made us all onionade!"

"Damn!" I thought. It all made perfect sense! In the terror of the situation, I had mistakenly diagnosed Captain Stubs with cavelust, not realizing that I myself had fallen victim to an equally dangerous case of cavedread. My great Captain, my fearless leader, was dead because of my careless cavedread. There was never a blob creature, just good intentions from a good man, a noble man.

"Never again," I vowed. Never again would I let my crippling fear of caves drive me to murderous extremes. I had learned a valuable lesson this dreadful day. I had learned the lesson of the cave.