I am not a very good judge of fashion. When I get out of bed in the morning it's a tough call between putting on the clothes I wore yesterday and not even putting on pants. I don't own any vintage apparel unless you consider a Hypercolor shirt I've been wearing since the eighth grade vintage. I'm fat, I only shave intermittently, and I usually look like I just wandered out of a dive bar at last call. But by God I am still qualified to judge the fashion industry as harshly as I judge the gaming industry. I may not know the ins-and-outs of the runways in Paris, Milan, and Tokyo, but I'm not retarded either and I can still spot a guy with cerebral palsy from half a block away.

I wanted to emulate the snarky yet agonizingly idiotic red carpet revues conducted by android harpy Joan Rivers, her equally untalented daughter, and a cabal of lisping homosexuals obsessed with what's "in". If they consider themselves the Fashion Police then I would become the Fashion SWAT. They'd be jerking each other off to pictures of Lindsay Lohan in a strapless black dress while I'd be kicking in doors and slapping quick-cuffs on a beret-wearing fashionista in New York's garment district.

Like all good cops I needed a partner. Unfortunately, Something Awful does not normally make fashion critiquing part of its content so the pool of potential partners was pretty limited. Luckily we do have on our staff the world's biggest elitist asshole, and a certified scientological doctor no less. I turned to Dr. David Thorpe and asked him to accompany me through the seedy tenements of fashion's underbelly. Think of us like Starsky and Hutch, Butch Cassidy and the Sundance Kid, or Coronas and limes; we are just two honest cops out to get our own particular brand of justice.

This first - and potentially last - installment of Fashion SWAT we headed across the pond to Japan to check out the flourishing goth culture there. This is just part one of our review, so look forward to the remainder of the full hot order on Monday. 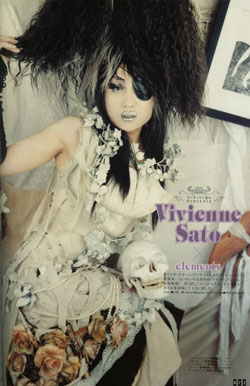 Zack: I think it's great that the Japanese are finally taking eye patch couture seriously.

Dr. Thorpe: I have this fantasy that the skull is the skull of the man who bit out her eyeball. That really ties the picture together, in a way. Maybe we can assume that having her eyeball bitten out by this man destroyed her life, and that's why she's dressed up as a month-old wedding cake.

Zack: I like that skull belt buckle though. It definitely beats a big golden platter with an 18-wheeler on it or crossed revolvers. I can see cowboys riding the actual-human-skull-as-belt-buckle trend to its logical conclusion of having entire skeletons draped like a loincloth over their pants. Platform cowboy boots and denim eye patches will go together like hotdogs and Rice Crispies.

Dr. Thorpe: Maybe she's holding her hair up like that and looking in the mirror and saying "Why am I doing? Is this really what I have become? After all these years of hunting down this man who bit my eyeball out, am I reduced to this?"

Zack: Her hair looks like a giant Muppet's mustache. Did the Swedish Chef get exposed to radiation and then start hanging out in Tokyo? 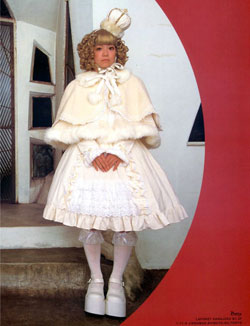 Zack: This is what royalty wears in countries where everything is on really high shelves. The commoners are forced to use step ladders to reach things like jars of pickled eggs and cans of tiny crowns while the royalty glides about on their foot thick booster shoes.

Dr. Thorpe: I like the jaunty angle of her hat, she sort of looks like a cross between Jughead, Shirley Temple, and a Christmas ornament.

Zack: That crown makes me think that there's a car somewhere in Compton missing its air freshener.

Dr. Thorpe: She's giving me this icy, accusatory stare that's making me feel like I'm a pervert even though I don't want to have sex with this girl. Guess what lady; YOU'RE the one dressed up like the strumpet of wonderland, why are you looking at ME like I'm doing something wrong?

Dr. Thorpe: The shape of her dress is like two jellyfish having sex.

Zack: That fucking wig isn't fooling anybody either. There are dolphins in nearby oceans that are chirping with laughter about that mop head. It's like someone glued springs to a wooden helmet. 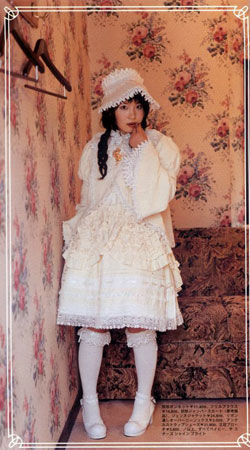 Dr. Thorpe: Oh no! My grandma's house threw up on this poor girl.

Zack: I think Laura Ingles Wilder head butted a lampshade. Where do the Japanese get off dressing like American pioneer women anyway? That is OUR domain, and if anybody is going to be dressing like pioneers it's going to be a 50 year old woman at historic Vicksburg who talks about butter churns. Not some club girl in Shinjuku looking to score some X and grind on a guy dressed up as a funeral director. Actually, I imagine the clubs people go to when they wear clothing this complicated involve lots of standing motionless under the air-conditioning vent.

Dr. Thorpe: The combination of standing up against the wall, absent-mindedly chewing her finger, and pointing her toes inward sort of combine to create a disturbing sense of mental retardation. She looks like one of those autistic kids who spend all day computing prime numbers and shaking like a leaf.

Zack: Or the retarded girl being cared for by the senile grandma who dresses her up for church in the kid's clothes she found in a steamer trunk in the attic.

Dr. Thorpe: Judging by the empty hangers, those are the only clothes she owns. That is really the only excuse for wearing clothes like that.

Zack: Other than talking about the butter churn at historic Vicksburg. 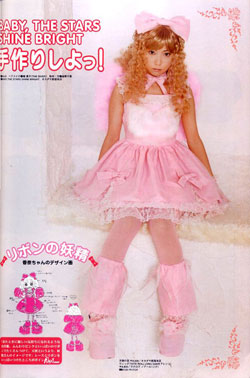 Dr. Thorpe: This next photo is really just a shocking indictment of an entire culture, sort of like looking at photos of Auschwitz or Lenny Kravitz.

Zack: I really have to criticize this outfit for not having enough pink bows. There are at least ten surfaces where more bows could have been applied.

Zack: Those nylon cuff things on her shins look like she was putting on a track suit upside down when one of the worms from Tremors burst out of the ground and ate the rest of it. 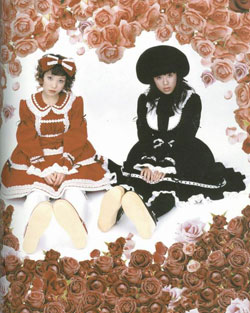 Zack: This picture is one of my favorites. It's what newspaper inserts advertising back to school specials look like in Hell. I also can't tell if the girl on the right is wearing a hat or just has the most geometrically perfect afro known to man.

Dr. Thorpe: This picture gives me such an uneasy feeling. The way they're staring at me just makes me feel wracked with guilt, as if they're implicating me in the horror that surrounds them.

Zack: The girl on the left is tilting her head because of the unbalancing weight of those stacked bows up there. You know what this bow needs? A bow on it. She also seems to be wearing a more complicated and probably much more expensive version of Vicky's outfit on "Small Wonder".

Dr. Thorpe: It would make me feel much better if I found out she was a robot. I think the one on the right got her outfit by cutting up and stitching together French maids and somehow removing all their sexual allure in the process.

Dr. Thorpe: The top panel in the next set is confusing me. At first I thought that thing was a corset, but then I saw the arm sticking out of it, so maybe it's a giant sleeve. It's like an Escher drawing, it's all fucking topsy-turvy and I don't know what to think.

Zack: That outfit in the top panel is what people wear when their stated occupation is "moping". I mean seriously, who gets that dressed up to sit alone and look wistful other than a professional? I can almost hear a Tori Amos song about rape coming out of a sticker covered CD player.

Dr. Thorpe: Somehow I'm not willing to accept that the girl in the bottom panel has honest intentions with that crucifix.

Zack: She is leaving a museum and expecting to be attacked by vampires. She is just taking the sort of precautions you or I might take if we thought the undead were lurking nearby.

Dr. Thorpe: I bet Peter Murphy and Robert Smith would both laugh at these girls.

Zack: Marilyn Manson wouldn't. He would take them very seriously and definitely invite them onto his tour bus and change their dreary lives by taking them on some vague musical adventure. It would be like South Pacific only it would be set in London and would involve latex nurse costumes, ornate black cassocks, and quasi-fascist uniforms. They would still sing "Happy Talk" though. Thank God.

Dr. Thorpe: I once saw a Bauhaus video at a friend's house wherein Peter Murphy was dressed in a big cape on stage, and he walked over and threw open a coffin and light came pouring out of it, and he threw the cape over his eyes as if to protect himself from the unspeakable horror within. I thought that was pretty much as lame as the whole gothic thing was ever going to be able to get. But that's before I knew they had elaborate moping couture.

That's all for this week. I hope you're looking forward to the exciting conclusion of our first ever Fashion SWAT exposé on Monday. If you aren't, well, I apologize on behalf of the board of directors of the Something Awful Creative Planning Council.

Who Photoshops the Phriday?

Hey gang, Livestock here. I'm proud to announce we have a second round of "Terminators with Hats" images up and ready for viewing! Actually, I'm lying as usual. In an odd twist, we've got a whole heapin' helping of funny comic strips loosely based on the classic DC Comic series Watchmen. Whether you're a fan of Watchmen or not, you'll probably find humor in the humorous images featured this week! Amazing how that works out, isn't it? 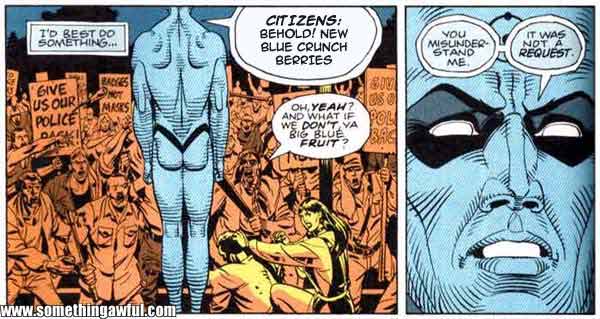