The Fast and Furious: From 27 to 65 Years In Under Two Weeks 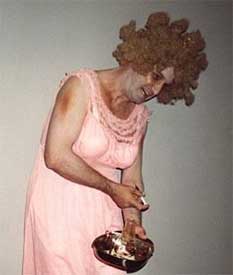 This is either me now or will be me in roughly two years.

I've always derived a perverted pride from the fact that my body and mind feel as if they age three years for every 365 days of my existence. To be perfectly honest, I am a wreck both physically and mentally; I sweat like a Flip Wilson ice sculpture in Iraq, arthritis occasionally creeps into my hands and legs, and my back feels as if some nefarious governmental organization has been using it to store recycled fighter plane parts for the past 20 years. I cannot stand rap music, I despise bars and the so-called "social scene" that other 27 year olds partake in, and I fail to see any downside to sitting on my back porch and waving a cane at the neighborhood kids who pass by on their fancy high fallootin' bicycles and scooters. At the rate I'm aging internally, I expect to be a 150-year old by the time I'm 50, which would probably break some record somewhere and cause Willard Scott to mention my name shortly before he begins making up stories about the weather. If my current aging process wasn't bad enough, I recently added another 30 years or so to my life in under two weeks: I became a home owner.

Anybody who has read this webpage knows of my past apartment-dwelling experiences: no matter what apartment complex in the world I move into, I end up living next to MC Smokes Weed Every Day and DJ Plays Shitty Techno 24 Hours a Day. I'm fairly convinced that these two individuals have been somehow reverse-stalking me, predicting my each and every move, then renting an apartment next to the one I plan on inhabiting before I even have a chance to tour it. One day about a month or so ago I decided that I had grown tired of sharing walls with people who engage in daily goat-molesting orgies broadcasted over 6,000-watt stereo systems, so I took the plunge and purchased my first home. With such low interest rates and property value, I actually pay less monthly fees owning my home than I would in my previous apartment full of crackheads and atomic bomb-powered bass speaker fanboys. Logic commanded me to buy a home and as a result, here I am, living in my own house located in majestic Lee's Summit, Missouri.

I hadn't originally given much thought process to the mental effects owning a home would cause. I assumed that I'd be the same dopey jackass that I was before, content to simply slouch around and occasionally glance away from my computer monitor when I suspected something I owned was either on fire or getting urinated upon by my cats. Nobody told me the cold hard truth about becoming a homeowner: it changes you in ways you cannot imagine. Your entire sense of reality and priorities shift in a way that none of your friends will be able to recognize you, like in that one movie where Tom Cruise was all popular and rich and handsome, then he got in a car accident and nobody liked him anymore because he had become ugly and a Scientologist. Allow me to explain just a few of the many mental polar shifts you will experience once you stop renting and buy your own home: 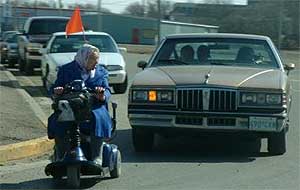 I sympathize with this poor woman.

1) You develop an intensely depressing interest in grass and mulch. As an apartment renter who inhabited "yet another fucking apartment complex," I never put too much thought into maintaining my lawn or going outside to trim the bushes. This might be partially due to the fact that I lived on the third floor and if I attempted to walk outside and mess with the dirt and weeds growing around the apartment, I'd fall three stories to my death (I'd land on one of the many, many ducks who would impale me with their beaks / bills / stilettos). Additionally, the apartment complex owned and maintained all the land there, so I would've probably felt uncomfortably encroaching on the jobs of the illegal Mexican immigrants in charge of lawncare.

Whenever I'd visit my parents, I would constantly be perplexed by my dad's seemingly insatiable obsession with his lawn and the green, woody, leafy objects that grew vertically from it. I simply could not comprehend why somebody would exert so much time and energy taking care of a bunch of crap which would eventually grow back again in a week. This explains why I haven't washed or brushed my hair since the Challenger explosion. The whole concept of "lawn care" boggled my mind and even depressed me to a certain degree, knowing that people could spend so much time digging around in the mud like a suburban pirate searching for buried treasure in the form of a grub or family of moles. However, once I moved into my home, the chemicals in my brain dramatically shifted to the polar opposite direction of wherever they previously inhabited, and before I knew it I was mowing my lawn, trimming bushes, and spreading insect-killer like a true suburbanite.

It's really quite sad in a way; there's new mulch around all my bushes and trees, I spent hours pulling out weeds and trimming the lawn with gardening sheers, and a majority of my weekend was dedicated to enhancing the deep green luster of my surroundings. I know that this is one of the most pathetic things to admit, but I'm actually taking pride in the appearance of my lawn. If you're half as scared as I am, you should probably close your Internet browser right now and delete this website from your bookmarks, as I think I've become a completely different person... a person who might try to kill you if you defile or even insult my lawn. I have named it "Gretchen" and it is very sensitive. I'll eventually set up its own email account so you can ask questions and perhaps interview it. 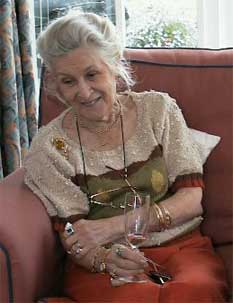 Okay, this grandma is just weird.

2) You grow jealous of people who can afford nicer homes than yours. When I lived in apartments, I honestly didn't give a shit about the quality of my residence or my friends' flats. I failed to care that one of my friends had a luxurious, $2,000-a-month apartment overlooking downtown Seattle, whereas my apartment smelled like charcoal and contained carpet composed of horse hair. At that point in my life, apartments were simply a series of interconnected rectangle-shaped rooms which usually joined each other in some type of logical progression. I never found myself wishing to move into a larger, fancier apartment because I really didn't give a crap. I was perfectly content if I lived in a place which simply kept the rain and homeless people out of my kitchen. Once I purchased a home though, that feeling changed.

Now, as I drive to Bed, Bath, and Beyond so I can purchase throw rugs which compliment my drapes and the beige color scheme of my livingroom, I spy expensive houses from the corner of my eye and feel a knot of jealousy form in my stomach. Why do I have such horribly negative emotions about rival homes? I'm perfectly content with my current home and since I live here alone with my two cats, I definitely do not need a larger dwelling. I don't make enough money to afford one of those fancy lad mansions which I pass by every day, and even if I did, 96% of the space in the home would remain empty and barren. Despite the logical side of my brain arguing "hey dickhead, your current home is just fine," the emotional side of my brain continuously chants "they all think they're better than you. Look at them with their expensive houses and nice cars. They look down at you and think you're inferior to them. You must show them. Yes, you must show them all! BEGIN THE CLEANSING PROCESS." Then I continue writing letters to Jodie Foster.

3) You begin watching and attending Major League Baseball games. I've never had anything against baseball; in fact, I used to be an avid card collector when I was a kid. I stopped purchasing baseball cards once every company decided to charge $189 per pack of cards, each labeled something ridiculous such as "Fleer Ultra Superstar Platinum Limited Edition Stand Out Impact Player Chrome Series 37." The only people who can afford to collect baseball cards these days are the players themselves, and they're too busy getting in bar fights and raping women to do so. In between coveting my neighbors' houses and working in my lawn, I've been watching a lot of baseball on television, playing baseball games on my Sony X-Boxcube, and even ATTENDING KANSAS CITY ROYALS GAMES. Yes, that's correct, I actually went to see the Royals play (and invariably lose) to the Oakland Athletics on Sunday. I was surrounded by a crowd of people wearing black knee-high socks and those little yellow radios that you strap around your thigh so you may listen to the AM radio broadcast as the game progresses. The only consolation I can possibly derive from this traumatic experience is the fact that, amongst all the people seated around me, I was the person yelling the most incoherent and nonsensical garbage. I continuously shouted "BRING BACK MELIDO PEREZ!!!" as loud as I could, because next to Otis Nixon, Melido Perez was the ugliest man in baseball (and briefly pitched for the Royals in 1988 before they traded him to the Yankees for $28 and a Tupperware container of ball bearings).

I don't even know who I am anymore. I've mutated into a bizarre creature who seems to value odd, worthless things such as the color of grass and the ERA of relief pitchers. I live in a neighborhood occupied by people twice my age, folks who purchase lawn furniture and have no qualms with standing around in their khaki shorts while spraying a hose onto their bushes for hours. I have aged from 27 to 65 years in less than two weeks, an experience which has been both fast and furious. If my next update revolves around the cost of prescription drugs or my doctor's supposed incompetence, then somebody please drop over and euthanize me for my own good. In the meantime, I've got to go and see what the weather will be like later today and see if my picture was mentioned by Willard Scott.

Ryan "OMGWTFBBQ" Adams back for more, because I can't seem to eat just one. There are probably some chemicals or something in this, I dunno. Before I forget like usual, I want to thank all of you folks out there that send me /tells on Planetside saying how much you like the site. Despite the fact I really do very little compared to Lowtax or El Pinto, it is nice hearing that people enjoy what we do.

On to the Goldmine. In today’s fast paced movie making society, it's a wonder that we don't hear more of actors accidentally slipping into roles they portrayed in other films.I just re-read the above sentence and wow, I need to work on my segues. You’d think I'd blame drugs which might slightly be a more plausible reason but nope, you got that. Lowtax is going to beat me again. So yes, that's the topic of today's Comedy Goldmine: Actors confusing their roles. Sounds daft you say? Well check this out: Maybe it's just the nerd in me, but damn, I'll buy tickets to see that movie. Three or four times. Anyhow, the goons took it upon themselves to mix the movies and roles up a bit, and I think it turned out very, very well.