GLAD Magazine (Thanks nohomers.net) - When crazy Christians heard about MAD Magazine, they rubbed their crucifixes together (or whatever crazy fundamentalists do) and said, "We'll see about this!" But they must have been a little too busy protesting military funerals to show everyone how god really feels about homosexuals, because it took them about 40 years to produce their answer to MAD - which was about 20 years after the magazine was still relevant to people who didn't grow up to be Internet comedy writers. Also, they were too stupid to realize that the "GLAD" in GLAD Magazine is not the opposite of the "MAD" in MAD Magazine. If they were any smarter, they'd have named their magazine "SANE," but I guess they didn't have access to secular dictionaries.

The centerpiece of their site is a "parody comic" (and I use the term "parody" about as loosely as "comic") produced about eight years too late about The Simpsons. Don't give away the secret ending where Homer solves all of his problems with the Bible! That last sentence was a note to myself. 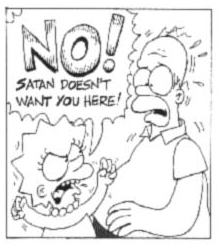 Like all things of the Crazy Christian variety, it's as baffling as it is ironically funny. So grab some wine, heat up a Bible or two, then sit back and enjoy.

Special thanks to Microwave and DocEvil for the crantastic art in today's update!