It's a week of such cinematic density that we couldn't possibly hope to cover everything. That said, we do have three big Christmas releases lined up in the form of the mostly brilliant American Hustle, the slightly disappointing The Wolf of Wall Street and the absolutely dire 47 Ronin.

EXPECTATIONS: I'm excited for this one, and I can't pinpoint why. Something about David O. Russell's work just clicks with me. All of his movies have some fundamental flaws to them, but they're always just good enough in other matters to make you ignore them. It really seems like he's at the point in his career where he's developing a good regular acting troupe that he can re-cast and play with. (Christian Bale, Mark Wahlberg, Jennifer Lawrence, Bradley Cooper). Basically, this follow-up to last year's fantastic Silver Linings Playbook represents an interesting and curious point in Mr. Russell's career. Okay, I guess I lied, turns out I can pinpoint EXACTLY why I'm excited for this one.

REALITY: Reportedly, so much of this film's dialogue was improvised that at one point Christian Bale turned to David O. Russell and said "Y'know this is going to mess with the plot, right?", to which Russell responded "Christian, I hate plots. I am all about characters, that's it." Arrogant as that sounds, it's not an uncommon method for a director to take. Woody Allen, for example, has made a long career out of only caring about characters, all of which happen to be him. But this begs the question of why a director who is fully aware that his plots are secondary in importance choose to create a script that is so heavily plot-driven? The answer, apparently, is that it doesn't matter. 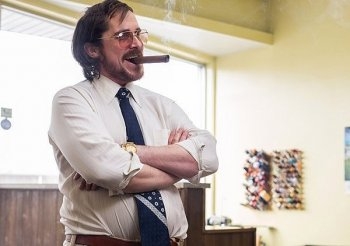 Sometimes a cigar is just a penis you put in your mouth and suck on.

The mostly-made up plot, such as it is, is as follows: Schlubby conman Irving Rosenfeld (Bale) and his girlfriend/partner Sydney Prosser (Amy Adams) make a decent living by pretending to be loan brokers and screwing desperate people out of their savings at $5K a commission. When they are caught by FBI Agent Richie DiMaso (Bradley Cooper), he conscripts them into working for him, in order to set up a series of politicians for bribery and corruption, including Carmine Polito (Jeremy Renner), the hard-working mayor of Trenton, New Jersey. As the operation goes on, Irving befriends Carmine, as Sydney and Richie grow closer together. I've gone this entire plot description without mentioning Jennifer Lawrence, who plays Irving's jilted wife, Rosalyn. That's because this is how Rosalyn is treated in the film, she's completely incidental to the main story, but she's also an unpredictable wild card that can change the game entirely. Since the storyline is basically being made up as we go along, this makes Jennifer Loki, Trickster Goddess, the most important point in the entire ensemble.

One of the most interesting parts of being a film critic is watching people become better at their trade, and forcing your opinion to change. In 2011, I wrote: "Why don't I like Bradley Cooper?... Whenever I see his face, I think "Ugh, that guy?" Two years later, I have reconsidered my position on Bradley Cooper. Cooper is very much like Lethal Weapon-era Mel Gibson. His manic intensity is only tentatively masked by his charisma and charm; this is why it's so effective when someone like Russell allows him to play psychotic. In fact, I'd be okay with Russell directing Cooper and Lawrence as crazy people repeatedly. Lawrence is a powerhouse the whole time, a conniving force of nature that she clearly had fun portraying. 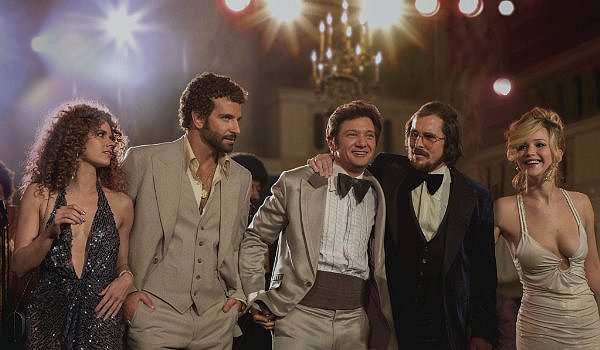 You guys are having way too much fun. I thought crime didn't pay?


In fact, the best performances in this film involve people playing dual-roles in a sense, portrayals of concealment. Cooper lets his aforementioned charm transition suddenly into ambition-driven insanity, but further inspection reveals that this was always present in the character from his first moment on screen. Similarly, the key to Lawrence's performance is that she plays Rosalyn so that it's never actually clear to anyone, including the audience, exactly how much she knows about the big con that is playing out. However, no one delivers this better than Adams, switching voices and demeanors at the drop of a hat and beautifully entwining her role with her role-within-a-role. In an already strong ensemble, Amy Adams is the standout.

One of the things I like the most about Russell is that he plays around with aesthetics to match whatever tone he's going for. In The Fighter, he used documentary and live sports-style cinematography, and he was so successful at doing Wes Anderson in I Heart Huckabees that until about a year ago, I was sure it was an Anderson film. In American Hustle, Russell plays with filters (in a non-Instagrammy way) and makes up excuses to have his characters walk through fake fog, just because he feels like it. It all goes a long way towards re-creating the sense of material excess that's pervasive in '70s Crime-sploitation cinema. Helping this is the amazing costume design, and again, the best part of that is Amy Adams. Adams' wardrobe is really interesting character-wise. The character who conceals the most wears the outfits which conceal the least. Moreover, we're shown her actively choosing to wear these outfits, which says a lot about her character. People can say what they want about Russell's direction, but there's no denying that the man has style (which he shamelessly steals from other films.)

So, yes, the film does play fast-and-loose with its storyline. Often times you will find yourself lost in the plot, wondering "Where can they possibly be going with all this?" When this happens, and it will, just remember: They have no idea either. I'm not excusing this, it's a very obvious flaw, I'm just saying that while you're in the film, it doesn't particularly matter. There's so much else going on that it serves as an effective distraction, or a con, away from the fact that the story is aimless. It certainly doesn't feel that way, which is how the greatest hustle in the film is the one it plays on the audience.

MINORITY REPORT: The crucial difference between this film and The Wolf of Wall Street is how layered and subversive its long con is. American Hustle has a dozen tricks up its sleeve to keep you invested in what's ultimately a lark. It manages to turn what's essentially a cameo into a scene of pants-shitting terror. Meanwhile, Wolf of Wall Street straight up swindles you out of three hours by sheer force of will. - Joseph "Jay Dub" Wade