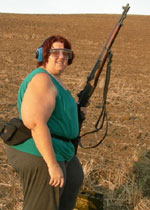 These chicks are like elephants because they're so unique they deserve their own category (also because they're fat and they have huge noses). I didn't really feel like making new categories for all of them so I'm just kind of lumping them all here.

Chicks that stand in the middle of crowded hallways and talk to one another: While I understand it's hard for a chick to go five minutes without telling someone an enthralling story about Facebook, there are better places to stand and have a conversation. The interstate, for instance.

Alternative chicks: I'm pretty sure there's some sort of economic law against "My Dad Molested Me" t-shirts since if you sold them you'd totally totally erase the demand for things like neon green hair dye and cat's eye glasses. The economy always bounces back, though. I'm sure things like soap and laundry detergent would see a huge boost in sales.

Fag hags: I really don't think it's a coincidence that the one guy who wants to spend time with you has no interest in having sex with you, sweetheart.

Fat chicks that walk really slow on the sidewalk: If I was a missed shave away from being forced to pull a cart for a living I'd probably speed it up before an Indian put an arrow through my forehead and made a necklace out of my teeth.

Pregnant chicks: These chicks talk about nothing but the things that come out of their vaginas, which isn't too different from most chicks except they're "disabled" or whatever so if you tell them you don't care people think you're rude. If I was a professor and I had one of these chicks in my class I'd ask her a really hard question, and when she got it wrong I'd turn to the class and say "Let's count all the mistakes in the room." If that didn't get her to stop coming to class I'd probably just shove her down a stairwell or something.

I would have done more of these but I didn't have time to break out a slide rule and shit to make sure everything was in its own little category. This is because a certain power-tripping graduate student is making us write two pages on our favorite movie, and I need to get it done so I don't have to sit in a conference and stare at her greasy-ass bowl cut for like an hour. Maybe she should spend less time worrying about my writing and more time building a time machine so she can go back to 1994, when chicks who went their entire college careers without bathing were supposed to be attractive. I guess some people get off on 28-year-old college students who look like Lisa Loeb swallowed a couple bowling balls, but whatever.

In closing, I would like to restate my thesis that all chicks suck for some reason for another. This is pretty much a scientific fact, so all you chicks can stop gnashing your crooked little baby corn teeth and write a nasty email to your friend because you're not in her Top Eight or whatever. Dumbasses.