Foghat vs. The Moon Monster 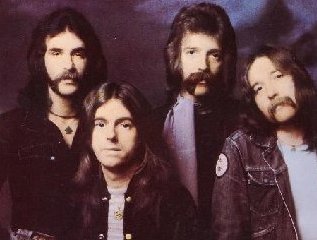 It was a dark and stormy night in the summer of '73. Lonesome Dave finished his club sandwich with gusto, and then nonchalantly tossed his napkin in Roger Earl’s lap.

“You know there’s a place for rubbish Dave; it’s called a rubbish bin, not ‘Roger’s lap’,” Roger Earl complained and tossed the napkin on the floor of the 747 that was taking Foghat to New York on their first American tour. They were all pretty nervous because their whole musical background was based off the American rhythm and blues style, and if the crowd rejected them, they didn’t know what they would do.

Rod Price was struggling to open a bag of complementary airline peanuts, so Tony Stevens, who was sitting next to him, helped him out by tearing the bag open with his strong fingers from years of playing bass. Rod thanked Tony and gleefully threw a handful of peanuts into his mouth. Tony was always looking out for Rod and sort of saw him as a little brother. Sometimes they would get into scuffles and fights, but in the end they always watched each other’s back, whether fighting a biker gang, putting out a tire fire, or opening a bag of airline peanuts, they were always side-by-side.

Lonesome Dave, on the other hand, was the hermit of the band, hence his moniker. He is the leader of Foghat and wrote all of the songs, but kept himself distant from the other members of the band. Some would see this as ego but his band mates knew that Dave was really not from this earth, and did not enjoy the company of humans who he called “smelly and loud”. In fact, Lonesome Dave was from the moon, and hitched a ride to Earth after the first Apollo mission in ‘67, escaping the huge amount of debt he owed from various moon credit cards. He enjoyed playing music for all the humans, but feared that one day somebody would be suspicious of his unnatural talent and find out his horrible secret.

Roger Earl, the drummer and black sheep of the group, kept looking out the side window of the plane with a worried look on his face. "Blimey!" he exclaimed. "That sure is a big ocean!"

"Shut your gob you blubbery buffoon!" Lonesome Dave said with annoyance. He went back to reading his magazine "Busty Bums".

Soon the plane landed at JFK Airport and the band Foghat set foot in America for the first time. Whirlwinds of litter and used diapers swept across the concrete landscape, gigantic fast food signs loomed over the horizon, and Negro baggage handlers danced for no reason whatsoever. The band walked out from the tarmac and into the US customs area where they were anally violated with brutal vigor. After that they painfully shuffled into the baggage claim area to wait for their suitcases. After an hour of waiting and everybody on their plane having already picked up their luggage, it was obvious that the band’s luggage was lost in transit. This was very bad for Foghat, for they had all of their rock and roll stage clothes, swimming trunks, and mustache wax in those suitcases. It was even worse for Rod Price who lost his lucky seahorse, a magical trinket that would give him good luck if he rubbed it against his crotch before a gig. They put in a claim ticket with the customer service desk and then went out of the terminal, where they needed to catch a taxi to the venue for that night's show. It was a tough start to what would become an amazing journey that would be remembered for generations to come.

The band crammed into the first taxi that pulled over on the noisy and chaotic New York streets. The taxi sped through the traffic at blinding speeds, running over a hobo who happened to be in the road chasing a butterfly.

"Hey mate, you just hit that bloke and killed him!" Tony Stevens proclaimed in amazement.

"I don't take no shit from nobody," the cab driver said in a thick Bronx accent. "You clowns are going for a swim."

As the band screamed in the back seat, the crazed cab driver drove at top speed towards Hudson Bay. Before going off the dock, he jumped out of the cab and into a shrimp boat. The taxi plunged into the water and sank like a stone with Foghat in tow. Things looked bad for the British blues rock band, but then Lonesome Dave transformed into a giant catfish, a skill he perfected while on the Moon. He then swallowed his band mates whole and swam to the surface and to safety.

Once on shore, the band shook the stinky water out of their long hair and shivered on the beach.

"This sucks!" piped up Roger Earl.

"Stop your moaning," said Lonesome Dave, now back in his human form. "Let’s see if we can find out where we are."

They wandered around the city for hours, lost, scared, and hungry. Tony Stevens almost started to cry and missed his mum. Just then they came across the path of a small puppy and kitten that looked just as cold and frightened as they were.

"Hello!" said the friendly puppy. "My name is Otis, and my kitten pal is Milo. Our owners accidentally left when the moved out of the city and we are trying to find their new home. Will you help us?"

"Sure!" exclaimed Lonesome Dave. "We are lost ourselves and need to make it to the big gig. Maybe we can help each other."

"That sounds grand!" squealed Otis, and they all walked together down the sidewalk and out of the big city.

"Why is Dave talking to the animals?" Roger Earl asked.

"It’s best not to ask questions, Roger. Dave will lead us to victory like always." Rod Price said as he patted Roger on the head.

For a long time they walked until the concrete and neon faded and they were in the deep woods of upstate New York. Then they ran across an obstacle, a large river that blocked their path. Across the raging river there was a mossy log that could act as a bridge. First Milo and Otis crossed the slippery log, and then Dave, Rod, and Tony. Roger was the last to cross and his knees shook like a leaf. He had been terrified of water ever since he was involved in a submarine crash while in the Navy. Since then he refused to take baths and showers, and only cleaned himself with wet napkins.

"Don't look down Roger! You can do it!" the band cheered. But it was too late. Roger already looked down and then slipped, falling into the rapids below. He was swept down the river and out of view.